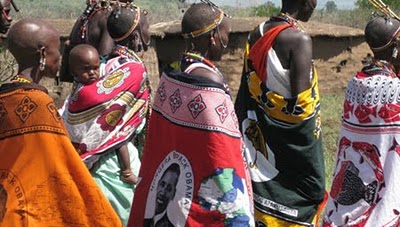 Colorful, cheap African textiles: they’re not just for Yinka Shonibare anymore!
Called Pagne in West Africa and Kanga [also khanga] in Tanzania, 1×1.5m screenprinted cotton wraps are produced all across Africa. There is a tradition to make commemorative kanga for major events, such as the official visit or inauguration of a US president. 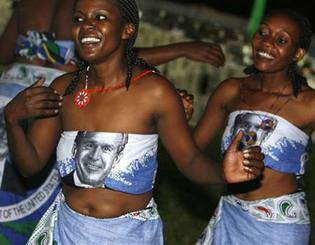 Or more typically, the inauguration of a local political leader. Politicians in newly independent nations quickly adapted a traditional practice, and distributed the government-produced fabric for free or at a subsidized cost to their supporters.
As Linda reports in full-color glory on All My Eyes, the Tropen Museum in Amsterdam has a show, “Long Live The President | Portrait Cloths from Africa,” which includes over 100 examples of these textiles. Many come from the extensive private collection of Bernard Collet and can be seen online. The Tropen show runs through August 29th. Obviously, everyone should go.
Even more obviously, though, everyone should be commissioning Pagne and Kanga designers to make commemorative patterns for whatever event or non-event they want to propagandize, too. The mind reels at the awesome possibilities.
African Portrait Cloth [all my eyes]
Long Live The President | Portrait Cloths from Africa [tropenmuseum.nl via all my eyes]
Adire African Textiles [adireafricantextiles.com via a.m.e., like basically everything in this post]