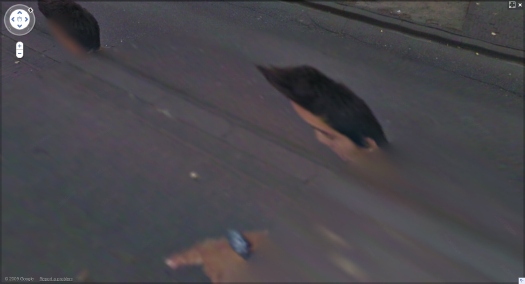 Alberto Giacometti’s figures look the way they do because he tried to capture what he called, “The moment I see them” and the way “they appear in my field of vision…” Arthur C Danto said this accounted for “the somewhat ghostly feeling of his figures, as if they were persons whose bodies had been all but erased.”
These ideas of figures, distorted, hovering on the edge of perception were very much in my mind when I found the incredible-looking sequence of [self] portraits of a man in the Google Street View panos of the Binnenhof, the Dutch Parliament complex in The Hague. The guy is almost certainly a Google Street View worker who accompanied the new Google Trike as it scanned and photographed the pedestrian-only area. By walking alongside the Trike, the guy ended up inserting himself into thousands of photos, and basically every stitched-together panorama. The stitching algorithm, though, often tried to erase him, or replace his photo with a better [i.e., unobstructed] image of the same spot. The result is a series of fragmented collage portraits, disembodied heads, hairdos and limbs.
I gathered full-sized screenshots from every pano, focusing not of the site itself, but on the guy, and then I bundled them into a book, which I titled, after Giacometti, Walking Man. That was in mid-April.
As I’ve been tweaking the book the last few weeks, though, I found that several of the Binnenhof panoramas have been removed from Google Street View, including all the coverage of the inner courtyard, and every one I illustrated in my blog post.
Google has been getting heat in Europe for its Street View datagathering practices. I’d suspect that investigations in Germany and across the EU–and now even in the US–for surreptitiously collecting personal data across wi-fi networks is a bigger issue for them than ye random blogger’s artbook-ish attempt to fit Street View into critical history of street photography. And yet.
Google had already had the Binnenhof in the bag when they announced the Google Trike last summer, and invited the public to suggest where it should shoot first. Whatever else it was, this seemed like a canny move designed to deflect any possible political heat from the Street View effort: we’ve already got the Parliament on board, who wants to be next?
Now, though, it seems like someone, either within Google or within the Dutch government, or both, is actively deciding it doesn’t want people to examin either the Binnenhof OR the Street View process too closely. And that includes Walking Man, whose portraits are being all but erased.