I hear blogging is out, everyone’s tweeting or facebooking now. While I don’t quite buy it, I am finding that I’m more likely to keep something I find interesting in my browser tabs for months rather than post it straightaway.
I will now attempt to clear those tabs to the general amusement and edification of my readers: 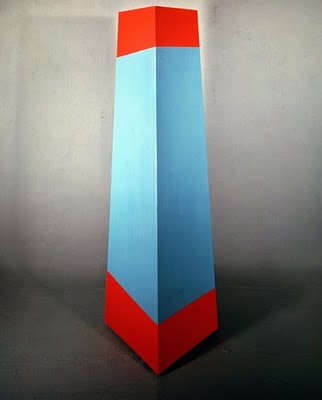 Soon after her first solo show at Andre Emmerich, Anne Truitt followed her then-husband James to Japan for several years. While there, she experimented with making sculptures from aluminum. She showed them at Emmerich, I believe in 1966, but was not pleased with them, and rather famously destroyed them all before her mid-career retrospective at the Corcoran in the early 1970s. Had them all crushed like a soda can. All but two, apparently.
According to Kristen Hileman’s catalogue, there was an aluminum Truitt in the collection of the Trammel Crow corporation, which could not be found, and another in the collection of a Connecticut collector whose name escapes me [and my Truitt catalogue is in our other apartment, alas.] Anway, that one was apparently damaged or destroyed by exposure, it’s not clear.
I’d never seen images of these lost works, but then suddenly, I stumbled across one on the excellent Los Angeles-based art and space blog, You Have Been Here Sometime.
It turns out to have come from the official site, annetruitt.org, which is a great thing to know about. The piece is called Out and dates from 1964. There are other Japanese works, and also installation shots from the Emmerich show. More geometry and fewer right angles than in Truitt’s later work, enough to make me wonder if the artist had issues with form, not just paint, light, and color, as she explained.