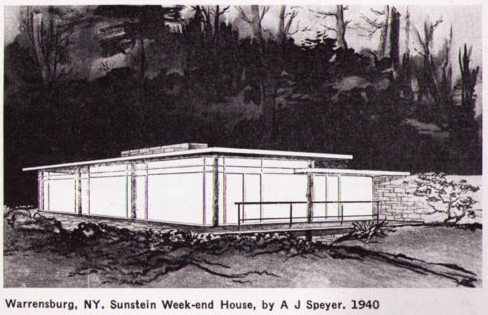 In 2008, I discovered this drawing of A. James Speyer’s Sunstein House, a 1940 modernist pavilion in the Adirondacks made of tree trunks and local stone, in an architecture guidebook published by The Museum of Modern Art. Even though the guidebook gave driving instructions, the lack of photographs, combined with utter online silence about the project or the client, made me wonder if the house actually ever got built at all.
Now, while searching for images of the house Gregory Ain built in MoMA’s garden in 1950, I found that the Museum has since published its archive of press releases. And it seems that Speyer’s Sunstein House was at least real enough to be included in a traveling exhibition the Museum organized in 1941 titled, “The Wooden House in America.” [pdf] So the search is back on.
Speyer is probably best known for his work as a modern curator at the Art Institute of Chicago; Anne d’Harnoncourt cited his influence regularly and his innovations in both curation and exhibition design. But he also practiced architecture, primarily in Chicago and his hometown of Pittsburgh. His 1963 house for his mother Tillie Sunstein Speyer is his most widely praised work, but his most famous work is the Ben Rose house, from 1953, which he designed with David Haid. It was Cameron’s house in Ferris Bueller’s Day Off. [Which is still for sale, btw, asking $1.65m, down from last year’s $2.3m.]
Anyway, Speyer got all International Style like that because he was Mies van der Rohe’s first graduate student in the US, and the Sunstein House dates from the time he was studying directly with Mies. And it’d predate by a decade Mies’ own first realized American buildings. So we’ll keep on it, and see what’s out there.
Previously: Forest for the Mies: A. James Speyer’s Adirondack Mystery Cabin