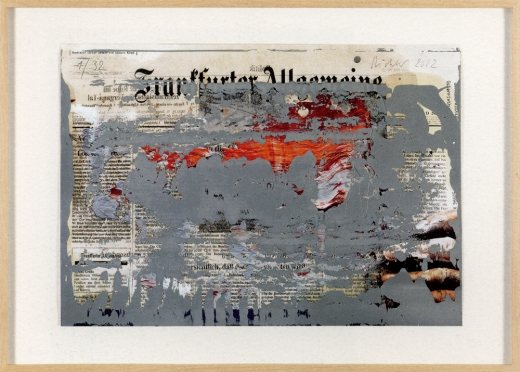 According to the Gerhard Richter’s website, FAZ Overpainted, a 2002 squeegee paint-on-paper edition is

based on a photograph of a 2001 copy of the Frankfurter Allgemeine Zeitung (FAZ). The hand visible on the right is that of Richter. The photograph was taken for a FAZ advertising campaign with the slogan ‘There is always a clever head behind it’

Which would mean that Tante Marianne, his 1965 painting based on a photograph of the artist as an infant and his teenage aunt is not, as the Dresden’s Galerie Neue Meister claims, Richter’s only self-portrait, just his first. 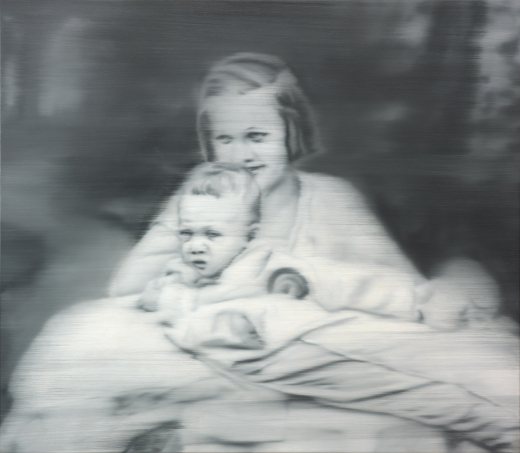 [Ironically, the quickest recap I’ve found of Tante Marianne‘s devastating backstory is in Sotheby’s 2006 catalogue for the painting’s sale. Is it really true that Marianne’s death at the hands of the Nazi’ and Richter’s discovery of his first father-in-law’s involvement in the euthanasia programs that killed her only came to light in 2005? What does it mean that Richter painted this image, and then let the psychological timebomb of Marianne’s story sit, unexplicated, for 40 years? Was he just sure it’d come out, and he was willing to wait?]
Anyway, the Met has an incredible, painting-like photo self-portrait from 1966; there are three double-exposure, overpainted photographs called, Self-Portrait, Three Times from 1990; and two straight-up, bust-size self-portraits painted in 1996.
Meanwhile, I’m going to assume that FAZ Overpainted isn’t Richter’s only appearance in an ad, either, just his first. Especially if they have Banana Republic in Germany.
FAZ Overpainted appears in “Press Art,” an exhibition of print media-related works from the Annette & Peter Nobel Collection, at the Museum der Moderne in Salzburg. [via @gerhardrichter]