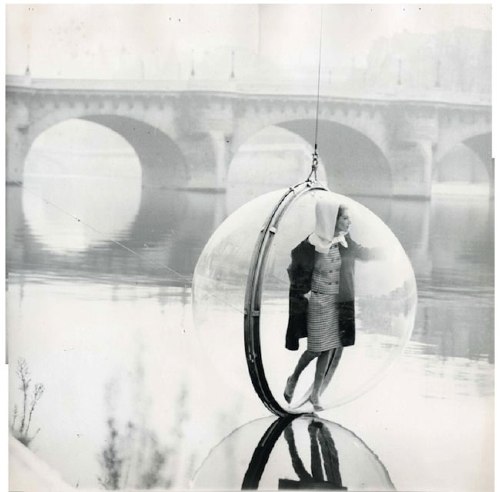 Melvin Sokolsky’s classic Bubble Collection photoshoot for Alexey Brodovitch’s March 1963 Harper’s Bazaar got BoingBoinged this week, and given the recent reorientation of the blog towards retrofuturistic orbs, Jason kindly passed along exactly what I was looking for: the making of, unretouched photos from Sokolsky’s set, showing the bubble’s cables and guy lines.
According to Photo.fr, Sokolksy erased the wires right in the negative for the shots Bazaar ran, but vintage prints of outtakes were exhibited last Spring in Paris. My favorite has to be the one above, where Simone D’Aillencourt barely alights on the Seine; it’s similar to the shot used on the cover of the artist’s 2000 monograph, Melvin Sokolsky: Seeing Fashion.
Bubbles Collection images have been circulating a lot online, but the best place to see them [assuming you love Flash, that is] is Sokolsky’s own site. They’re under “Classics > Paris 1963,” and in addition to a couple of shots of the crew and the crane at the end, there’s a fantastic color shot of a bubble floating against the New York skyline. Was Bubble Over New York [actually Weehauken] a prequel to Bubble on the Seine or an encore?
Quand Melvin Sokolsky faisait des bulles [photo.fr]
Melvin Sokolsky portfolio site [sokolsky.com]
Sokolsky Bubble Collection prints, vintage and modern editions, are out there [artnet]