The only word I can think of is the one Things already used: epic.
Sean Michaels goes long and deep for a Brick Magazine profile of the not quite invisible, not quite underground world of L’UX, Untergunther, La Mexicaine de Perforation, the culturebusting, space-infiltrating collective[s] who built a cinema in the catacombs of Paris, and who surreptitiously restored a giant clock in the Pantheon.
At least those are the activities we know about. Michaels talks at length with Lazar Kunstmann as well as with other urban explorers, to try to map out just what’s going on down there. I can’t say we really know any more than we did, but it’s still fascinating stuff.
I have written a lot about LMDP and Untergunther over the years. In 2004, I interviewed Kunstmann and was the first to publish the screening program for LMDP’s subterranean cinema, l’Arenne de Chaillot.. And when the Pantheon clock story broke, I posted pictures of their awesome Rietveldian crate chairs.
It’s been great stuff and great fun, but I’ve never been under any illusion that I’m breaking news or actually investigating. I’m just asking questions that seem obvious to me, but that other journalists or writers never seemed to ask [like what films would you show in a secret catacomb cinema?], and which Kunstmann and his UX colleagues decide to answer.
Michaels ponders at length the somewhat maddening empirical unverifiability of some of UX’s sensationalistic press coverage:

Kunstmann’s tales, the activities he recounts, the cataphile culture he invokes–it is, [UX chief] Lanso suggests, a fumis. It is smoke. It is the smoke that fills our vision, fills newspaper pages, conceals the group’s true projects and real work.
…
As for what this “real work” is, Lanso will not say. These projects, she underlines, are secret. “Don’t think that I say this against you, or against journalists in general. It’s the same for everyone. To be able to do what we do, this is how it has to work.”
I have reached a dead end. Lanso’s secrets are tantalizing, but I can neither confirm nor deny them. UX’s deepest riddles cannot be Googled. The question I ask is, Do I believe them? And then I ask, Do I want to believe them? And then I know my answer.

One thing I DO know for sure, I missed the debut of Kunstmann’s book last year. La Culture Clandestins, L’UX, which I now just ordered from Amazon.fr. Stay tuned. 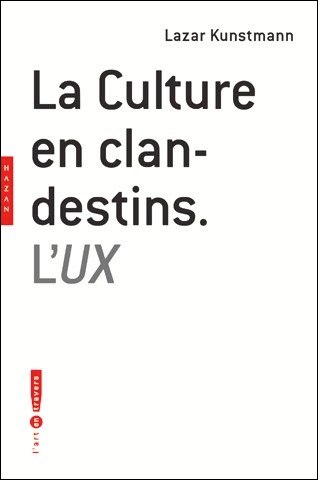