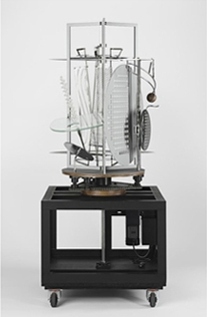 I’d known Laszlo Moholy-Nagy’s 1930 kinetic sculpture Light Space Modulator indirectly as a film subject, and then in 2002 through incredible color photographs Oliver Renaud-Clement showed at Andrea Rosen in 2002. [And again, in direct relation to the artist’s sculptures in 2007.]
The press release for that show quotes Moholy-Nagy on the LSM:

…a structure that is made to develop the sense of space and explore the effective relationships which must be within the quality range of any architecture – an ABC of architectural and projective space…
The mobile was so startling in its coordinated motions and space articulations of light and shadow sequences that I almost believed in magic.

Which is nice.
But I came to know it not as an object itself, a sculpture, and not as a film prop [the original title for the work is Light Prop for an Electric Stage], when I began researching the replication a similar object, Ray and Charles Eames’ Solar Do-Nothing Machine. Eames called their creation, built in 1958 for an Alcoa ad campaign, a “toy,” not a work of fine art. My own interest was to use the context of art to recreate the Do Nothing Machine–I want one and want to see and experience it in person. But it quickly became apparent to me that the Eameses’ modernist, experimentalist work already resonated with the contemporaneous history of light and kinetic sculpture. Which Moholy-Nagy’s work both prefigured and directly influenced.
Filled with dazzling close-ups of whirring, colorful components, the Eameses’ film of the Solar Do-Nothing Machine could be a Technicolor Hollywood remake of Moholy-Nagy’s film, Lichtspiel. But the Light Space Modulator turns out to be directly related to this project in another not insignificant way: it’s actually a replica.
Moholy-Nagy worked on the LSM for an easy decade until 1930, but he also tweaked, repaired and altered it for use and exhibition up until his death in 1946. His widow Sibyl Moholy-Nagy gave the work to Harvard’s Busch-Reisinger Museum in 1956.
But that was not what was exhibited when light and kinetic was the new hotness in 1970, both at the Howard Wise Gallery in New York, and at the Venice Biennale. And it’s not what is exhibited now or since, or what is shown in nearly every image of the Light Space Modulator published these days. Those are all refabrications, or replicas, or approximations, really, of the original–or at least of its final state.
So from Eames, I’ve been diverted by the fascinating history and reincarnations of the LSM. Which I’ll get into in a minute.