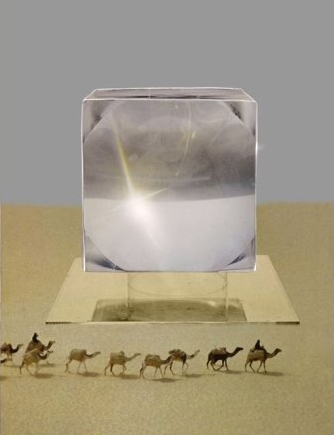 Digging around on Moholy-Nagy’s Light Space Modulator and its relation to a later generation of kinetic light works by artists like Otto Piene, I came across some early works by Piene’s Zero Group co-founder, Heinz Mack.
As early as 1960, Mack was showing plans for his Sahara Project [above, image via mack-kunst], which would, in classic Zero style, embody the most reductivist expression of art’s essential elements, light and space. 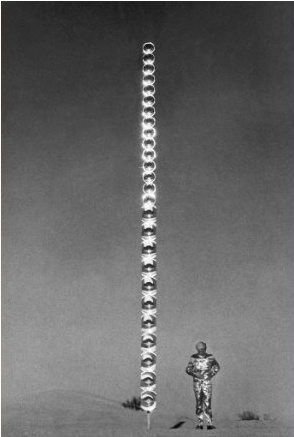 Mack showed his reflective and/or lit Lichtstele sculptures at various places, including in 1966 at Howard Wise Gallery, a center of kinetic and self-consciously future-oriented art. It took until the late 60’s for Mack to realize his utopic, minimalistic, phenomenological sculptures in the desert, though. 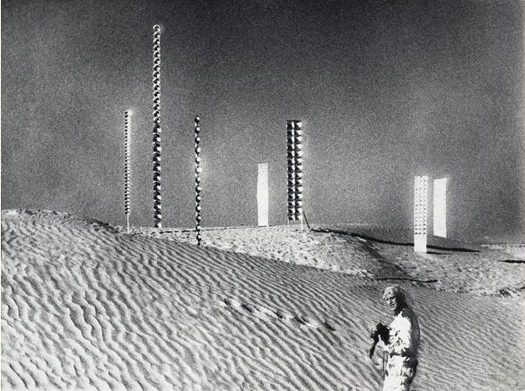 They look utterly fantastic in photographs. Or film stills. Mack produced a documentary of his art projects in Tunisia in 1968-9 with the German television network ARD humbly titled, Tele Mack, Tele-Mack, Telemack.
I need to read further to figure out how Mack’s work relates to what was going on around it. [The artist himself seems to see himself as a prophet of the future, a German incarnation of the otherworldly artist-showman in the Klein & Dali type. For some reason, this awesome still from Tele-Mack of Mack in his space suit makes me think of Klaus Kinski.] 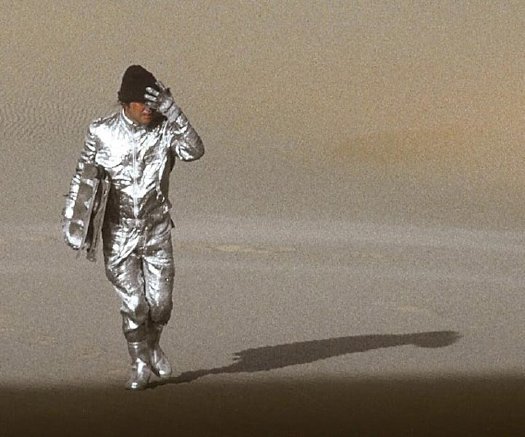 In his own bio, Mack namechecks artists he met in New York such as Reinhardt, Newman, and Marisol. But Tele-Mack, and by extension, his whole Sahara Project, have an inexorable connection to Land Art, too, and Smithson’s Displacements. Tele-Mack was produced with the artist couple Gerry Schum and Ursula Wevers, who founded The TV Gallery in 1967. From Ute Meta Bauer’s chronology of artist-driven exhibitions:

[The TV Gallery and later, the Video Gallery] exhibition took place on TV. Its duration was the length of the program.
Over a period of six months, Schum shot films with Land Art artists. He wanted to dematerialise art – to take away the character of art as a consumer item (opposition to Pop art).
Bernhard Höke, Hannah Weitemeyer and Gerry Schum made the film Konsumkunst – Kunstkonsum (1967). In this film, artist Heinz Mack stated that his art will exist on television and will only be shown to the audience by this medium, only to be destroyed afterwards. Later, in May 1969, this was realized in the Telemack TV broadcast.
Otto Piene also made an exhibition only for TV – a multimedia show.

Let’s file that last one away, about a Piene TV show, for later.
If Mack’s work was intended to disappear after being photographed or filmed or aired, it’s working. I can’t find a hint of Tele-Mack anywhere online, though it is apparently in various film archives. Mack has worked steadily, producing large, permanent works for public, government, and corporate situations. But his earlier work exists largely in the same handful of documentation photos. He installed a large Lichtstele in front of the Art Museum that was the center of the Osaka Expo70, but I can’t find a picture, and the only Japan photo on Mack’s website is the artist surrounded by young women in kimonos.
Perhaps the catalogue for the Ludwig Museum’s 2009 show, Heinz Mack, Licht der Zero-Zeit, has something. According to the show’s writeup, most of the works in that show come from the artist’s collection and hadn’t been seen for decades.
As dazzling and pristine and sublime as the work appears, I’m not sure there’s still a there there. Maybe it’s enough for someone rebuilding society in a postwar atomic present. But now that it’s historical, I think The Art of The Future needs to be more than Not The Past.
Meanwhile, if anyone has any leads on how to see Tele-Mack, I’d love to hear it.