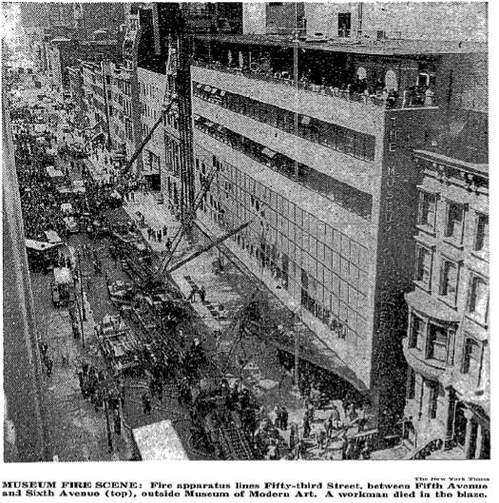 The fire at the Phillips Collection in Washington DC this morning reminded me of the incredible story of another museum fire, at The Museum of Modern Art in 1958. Before my time, I know, but I’d only learned of it last year, when Ann Temkin staged a show of Monet’s Water Lilies [Here’s Roberta Smith’s review, and a tangent I went on about Pollock] and mentioned the fire.
Mentioned the fire because it destroyed a giant, 18-foot-long Water Lilies painting the Museum had acquired just a couple of years before. [The current 3-panel Water Lilies was the replacement.]
UPDATE: LIFE published a 2-page color spread of the painting with the announcement of The Modern’s acquisition in 1957:

So what happened? The New York TImes’ report from the scene [purchase required] is riveting. [one image above] Director Rene d’Harnoncourt “trudging out” onto the street in tears. One worker dead, two visitors injured, and dozens of firefighters treated for smoke inhalation. Visitors and staff trapped on the penthouse terrace being evacuated by Alfred Barr, who throws a chair through a window and catches women and children on the roof of the neighboring townhouse. The fire chief marveling “at how women employees, soaked by dripping water, kept helping save the pictures.”
Like the Phillips fire [apparently], the MoMA fire was triggered by construction. In the Modern’s case, contractors installing air conditioning on the second floor were smoking near open paint cans, sawdust, and a canvas dropcloth. The work meant that except for the largest paintings, all the other art had been cleared from the second floor.
Art on the third and fourth floors was undamaged, and was evacuated to the garden, and to the Whitney Museum, which abutted MoMA on 54th St. Among those works? Hello, Seurat’s Sunday Afternoon on the Island of La Grande Jatte, which was on its one and only loan from the Art Institute of Chicago. Close call. 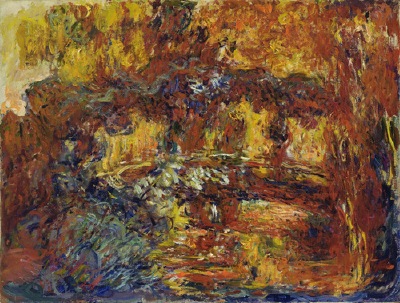 Meanwhile, besides the Monets–the large Water Lilies was apparently hanging on the 53rd St wall and had been “hacked” fighting the fire–the Museum initially reported that four works had been damaged or lost. The other Monet, another, smaller, late work hanging in the Bauhaus Staircase, was supposedly restorable, despite, as the Times put it, having “its oil flowed and blistered,” and “looking like a toasted marshmallow.” I guess I’ll have to check, but the Giverny painting known as The Japanese Footbridge [above] came into the collection in 1956, so unless MoMA had three late Monets at the time, that’s the toasted one.
[UPDATE: They did. Temkin’s essay about the Water Lilies makes it clear that the stairway painting was a smaller, but still big, Water Lilies. The Museum tried for three years to restore it, but in 1961, it was declared to be damaged beyond repair. Jackson Pollock’s No 1A, 1948. was also in the staircase and also damaged, but it was conserved.
Of the fate of the largest Water Lilies, Temkin wrote, “After the fire, Museum officials returned to find the painting buried under a pile of debris on the ground; firefighters had unknowingly destroyed it breaking through the windows into the building.” There’s a photo of the aftermath in LIFE Magazine’s April 28, 1958 issue. It is unreal.] 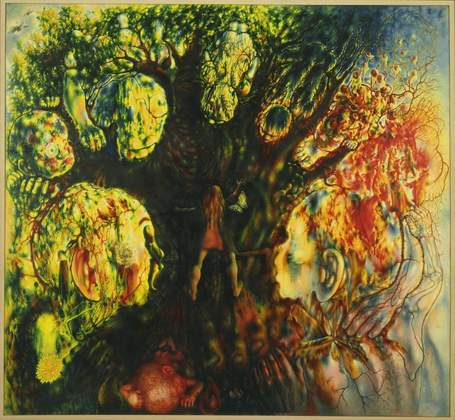 Boccioni’s The City Rises is still around, as is Pawel Tchelitchew’s Cache-cache [Hide and Seek], which was described as “probably the most popular [painting] in the museum.” [More on that in a second. The controversial original 1953 version of Larry Rivers’ Washington Crossing The Delaware [below] was damaged, though for some reason, it’s not listed in MoMA’s collection. Which means the only other total loss besides Water Lilies was a World’s Fair mural by the Brazilian artist Candido Portinari. 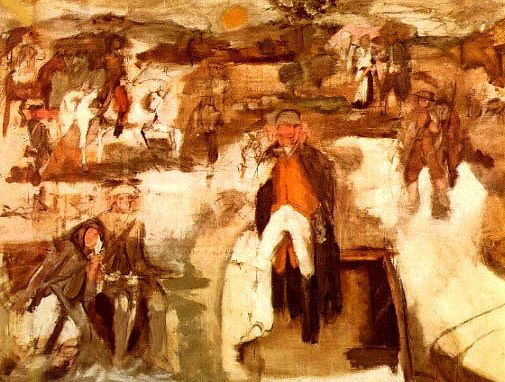 In a Times sidebar on April 16 detailing the art losses, Sanka Knox was reassured by a Museum “spokesman” that “none of the damaged pictures, including the two Monets, are among the most valuable of the museum’s paintings,” and then an unnamed “staff member” said that, “apparently none of the museum’s most valuable holdings” were damaged.” Which begs the question, right? Right:

Among these “most valuable” works, according to a staff ember, are Rousseau’s The Dream, Picasso’s Three Musicians, Van Gogh’s The Starry Night and Gaugin’s Still Life with Three Puppies.”

I’m sure it means nothing, but the only museum official quoted by name in Knox’s piece was Barr himself. Now about that most-popular Tchelitchew.
In 2007 FIT art history professor Richard Turnbull gave a Brown Bag Lecture at the Museum about the divergence of curatorial and popular opinion titled, “From Pavel Tchelitchew’s Hide-and-Seek to Andrew Wyeth’s Christina’s World” [mp3 available]. He said the museum education staff gets asked about Hide-and-Seek all the time by teachers; apparently it’s been in the NYC public school curriculum for decades, and they always want to walk kids through the painting’s cycle of life allegories. [Actually, I just finished listening to the whole lecture; it’s more like Tchelitchew hid so many faces and figures in the painting, you can stare at it for hours. It’s like a psychosurrealist Where’s Waldo?] It hasn’t been on view since around 1999 when the Museum closed for renovations.
Is it just me, or do all these paintings still look burnt? What a palette.
[images: top, nyt; the rest: moma.org]