So fantastic. When I started digging around a bit on its history, I just assumed Jean Tinguely’s kinetic masterpiece, Homage to New York, would itself be the most interesting find. Not quite. 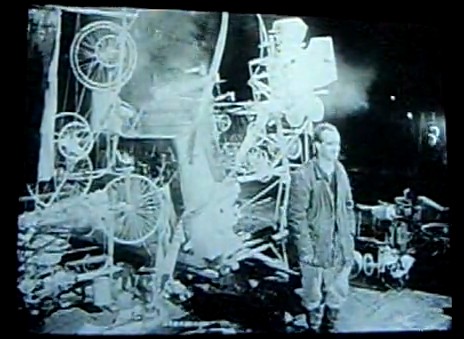 After making a name for himself in Europe with his “meta-matics,” automatic drawing machines, Tinguely came to New York in the early winter of 1960 and spent three weeks building Homage in the Sculpture Garden of the Museum of Modern Art. Billy Kluver helped him build the self-destructing sculpture from parts scavenged, thanks to multiple trips with curator Peter Selz, from the Newark dump.
Homage was performed? exhibited? destroyed? before an invited audience of around 250 on the evening of Thursday, March 17, 1960. I haven’t figured out who was there, but in a 2008 Brown Bag Lunch Lecture on the work, Columbia art historian Kaira Cabanas said someone referred to it as “Black tie Dada,” which might have just earned it a mention in my history of the gala-as-art movement.
The popular story is that the piece somehow malfunctioned, caught fire, and prompted NY firefighters to intervene just 30 minutes into the 90-minute event. Actually, even the Museum’s description of its own artifact from Homage says this. But it also has the incorrect date for the event, March 18, so perhaps not.
March 18 is the stated publication date for the Museum’s press release [pdf], though, which said the machine would be “set in motion” and “shown” only from 6:30 to 7:00. So it’s possible that everything went as planned. 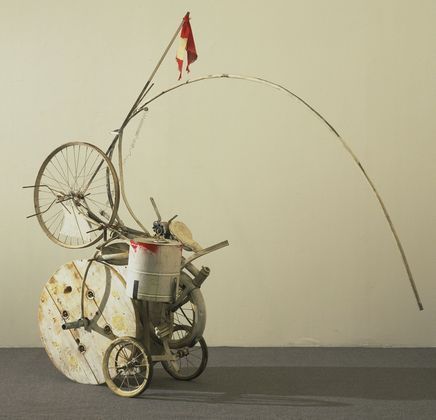 [Also, people apparently picked through the wreckage for souvenir fragments, but I can’t find any mentions of them surfacing. Besides MoMA’s conveniently self-contained hunk, above, the Tinguely Museum has a few manageable pieces.]
But really, the press release and the pamphlet/handout prepared for the event, is a gold mine of quotes and commentary. I double dog dare you to think of Alfred Barr the same way after reading his statement:

Forty years ago Tinguely’s grandadas thmbed their noses at Mona Lisa and Cezanne. Recently Tinguely himself has devised machines which shatter the placid shells of Arp’s immaculate eggs, machines which at the drop of a coin scribble a moustache on the automatistic Muse of abstract expressionism, and (wipe that smile off your face) an apocalpytic far-out breakthrough which, it is said, clinks and clanks, tingles and tangles, whirrs and buzzes, grinds and creaks, whistels and pops itself into a katabolic Gotterdammerung of junk and scrap. Oh great brotherhood of Jules Verne, Paul Klee, Sandy Calder, Leonardo da Vinci, Rube Goldberg, Marcel Duchamp, Piranesi, Man Ray, Picabia, Filippo Morghen, are you with it?

I am, Brother Alfred, I am! Say amen, somebody!
Ahem, also, did you see that weather balloon that was part of the piece? Here’s the sketch from the brochure: 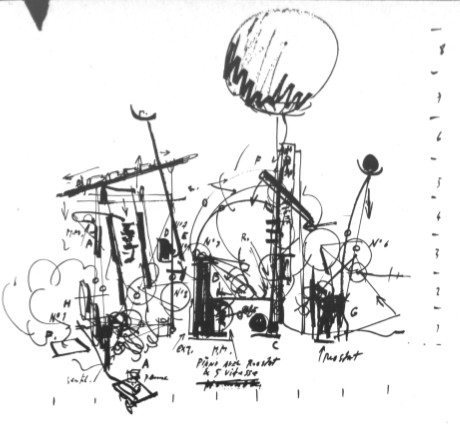 And here it is, atop another performance photo, probably, again, from David Gahr: 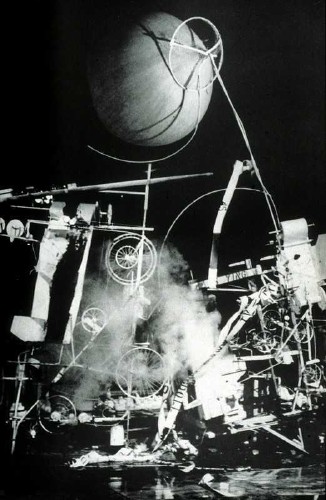 The brochure quote from original Dadaist Richard Huelsenbeck adds back some of the fatalistic frisson that can be lost in a nostalgic, artifact-centered look back at a troubled historical moment:

There are times in human history when the things men have been accustomed to doing and have long accepted as a part of the established order erupt in their faces. This is the situation right now–the universal crisis is forcing us to redefine our cultural values. We are like the man who is astonished to discover that the suit he has on does not fit him any longer. Religion, ethics, and art have all transcended themselves, especially art, which, instead of being art as we know it, has come to demonstrate man’s attitude toward his basic problems. So it is senseless to ask whether or not Tinguely’s machines are art. What they show in a very significant way is man’s struggle for survival in a scientific world…

He goes on to call Tinguely a Meta-Dadaist, which is quite nice. And to someone who lived through the horrors that produced it, it makes more sense than being nostalgic for Dada.
Anyway, Robert Rauschenberg was an early fan of Tinguely’s, and soon became an exhibition collaborator. Last winter the Tinguely Museum in Basel had a show about their working friendship. Which featured this awesome photomural of Homage To New York: 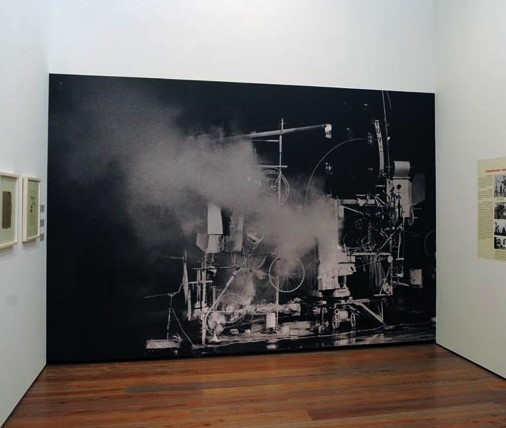 It’s probably from one of the performance images David Gahr shot for Kluver and MoMA. I don’t think it’s archival in any way, but it’s a great way to evoke the physical presence and scale of the assemblage.
I can’t find it now, but someone wrote how Tinguely kind of announced the Kinetic Art movement with Homage To New York, and then declared its end with “a similar” installation in front of the Duomo in Milan in 1970. Which cracked me up, because, hello, have you seen what Tinguely put in front of the Duomo in 1970? And was that similar to what Homage to New York was? Because I doubt it, but if so, wow.
Actually, let’s go to the tape. Or the film. Because D.A. Pennebaker shot the event, and made a documentary short, Breaking it up at the Museum, which features Tinguely previewing the piece, some details of the machine in motion, the takedown, the crowd, the applause, Tinguely’s curtain call, and a couple of audience member reactions:

“It’s one of the most exciting things I’ve seen in the art season in New York.”
“Why?”
“Well, it was something new, and visually, it was marvelous.”
“I felt like being in ze Twenties again.”
As Patrick said, a time machine.