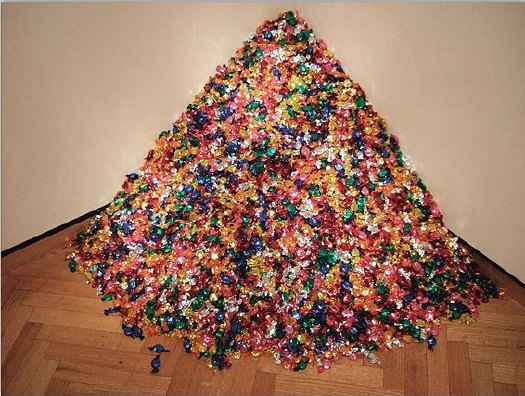 RB Before I knew you I saw something… You know what I’m going to say?
FGT I dedicated a piece to Ross.
RB Exactly. I thought, this is so sweet, I want to meet him. He dedicated this thing to me and I don’t even know him. (laughter) It put me in the best mood. And then someone said to me, “You idiot, why would he dedicate something to you? It’s his boyfriend.”

-Ross Bleckner interviewing Felix Gonzalez-Torres in the Spring 1995 issue of Bomb Magazine. This is about as funny as Ross gets. He really is as foolish as Felix is thoughtful. Well worth a read.
Bonus: did you know that by Fall 1994, after five solo shows and with his retrospective set to open at the Guggenheim, Felix had never had a review in the New York Times? [I just checked, and the closest was a paragraph in a cranky 1990 survey of Minimalist revival by Roberta Smith. She called his stacks “almost laughable.”]