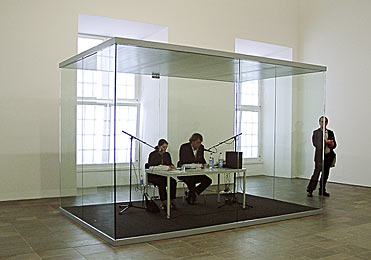 In 2002, as I was still trying on various kinds of public writing, I tried to capture the transformative experience of listening to–no, experience is the better word–On Kawara’s One Million Years.
That post was even titled like a screenplay: “Setting: Fredericianum, Documenta II, Kassel.” 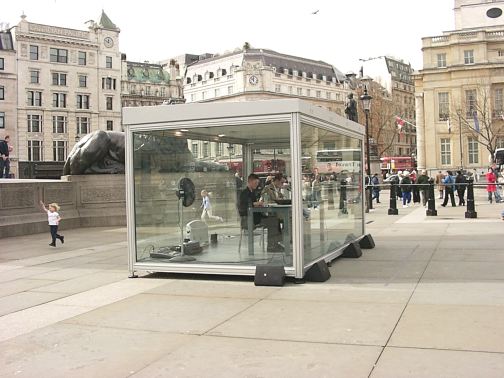 image via mightymac
In April 2004, South London Gallery staged a week-long, round-the-clock marathon reading of One Million Years in Trafalgar Square. Many passersby unfavorably compared Kawara’s volunteer readers in their glass box to David Blaine, who had, just a few months before, spent 40 highly publicized days in a plexiglass cube suspended from a crane next to the Thames. 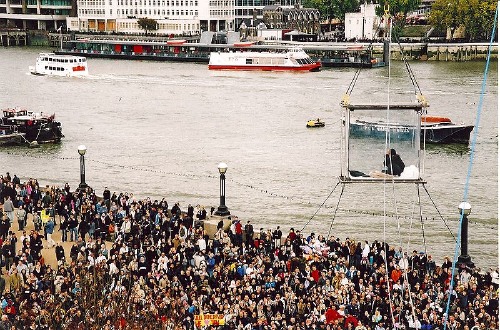 In 2009, when David Zwirner staged a reading/recording of One Million Years, Brian Sholis wrote touchingly and with great acuity about the experience of reading the years 79,936 AD – 80,495 AD with his then-fiancee.
And yet only just now, somewhere between finding Jerry Saltz’s characteristically gossipy, angst-ridden account of reading in the same show, and watching this comical YouTube video of Martin C. de Waal, a Dutch club kid/stylist/Orlan-style conceptual self-portraitist and his dance remix singing partner Marina Prins [!] getting all dolled up for their reading on the open platform at the Stedelijk–the one we’d been standing on a few weeks ago–do I realize the powerful performative essence of Kawara’s piece. And with less than a hundred of an anticipated 2,700+ CDs burned, it’s barely even begun.

The effect of living in a post-Marina world, I suppose