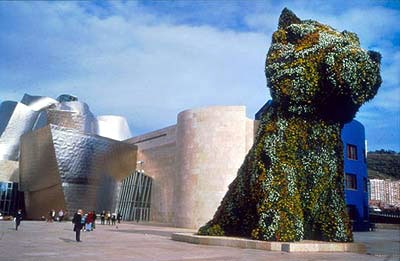 In reviewing Johan Grimonperez’ 1997 film, Dial H.I.S.T.O.R.Y., which was exhibited at Deitch, Ronald Jones underscores artists’ failure to, well, to matter very much in contemporary culture. And he reminded me of this, which I had completely forgotten:

Paul Goldberger’s piece in the New Yorker on Frank Gehry’s Bilbao museum made an important claim: ‘The politics of the Guggenheim Bilbao’, Goldberger writes, ‘are evident in a single word, “MUSEOA”, that is plastered onto the building’s facade in enormous letters’. Goldberger’s point is that, ‘museoa’ is not Spanish but means ‘museum’ in the language of the Basques. We take from the Goldberger essay that a collision between art and politics was inevitable in Bilbao. As a part of the Bilbao Pageantry Jeff Koons’ well known Puppy (1992), the floral sculpture that made its magnificent debut in Kassel a few years ago, was to be erected and brought to life with local flowers. Languidly watching workmen hang pots of flowers over the gigantic pup, the police ran a casual check on the license plate of the truck which had been used to deliver the flowers. The truck and plate did not belong together and that’s how the terrorists were found out. When the police began nosing around they discovered that the ‘gardeners’ were arming the adorable puppy with flower pots containing remote-controlled grenades. After the shoot out, in which one policeman was killed, the florist-bombers, members of the Basque group ETA, escaped. Several have since been arrested.

[via frieze]
Related: Felix Gonzalez-Torres on politics and art