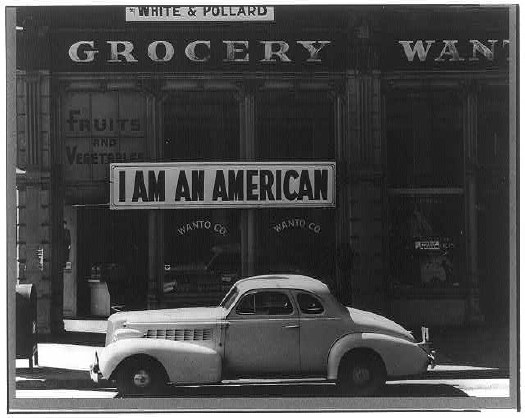 I’ve written and been inspired by Ansel Adams’ WWII Japanese-American internment camp photos for years, but inexplicably, I haven’t looked closely at Dorothea Lange’s. Paul has some intriguing examples at Eyeteeth. He also notes that Lange was actually covering the internment process for the War Relocation Authority, which quickly became as complicated as you might imagine. According to the Library of Congress, the US government immediately censored many of Lange’s photos, which tended to highlight the patriotism of the Americans being imprisoned without cause or charge. They weren’t widely seen or known until 1972, when the Whitney organized an exhibition about the internment titled Executive Order 9066.
The caption on this photo, taken in San Francisco in March 1942, when the store was being confiscated and its owner jailed, says the UC graduate nisei had installed the banner outside on Dec. 8, 1941. So on the bright side, in those four heated, panicked months, no one tore it down.
Day of Remembrance – Dorothea Lange’s Japanese Internment Photos [eyeteeth]
Dorothea Lange: Women Come To The Front [loc.gov]