Before I talk about Microworld, the 1976 industrial film made for AT&T by Owen Murphy Productions, let me just state the obvious, and get it out of the way:
We are long, long overdue for a comprehensive, scholarly retrospective of William Shatner’s spoken word pieces. The mandarins who keep our cultural gates should not be able to just drop a masterpiece in our laps on their own whim, not we who have known “Lucy In The Sky With Diamonds” for decades. I give you three months, and if I don’t see any movement, I’m taking the curatorial matters into my own hands. 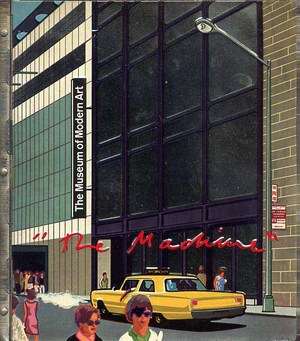 OK. Microworld. Holy crap, who made this thing? Owen Murphy Productions, who made several other films for Bell Labs over the years, including Incredible Machine (1968) which screened as part of the film program [PDF] at “The Machine As Seen At The End Of The Mechanical Age,” Pontus Hulten’s 1968 exhibit at The Museum of Modern Art. [that’s the show with the exhibition catalogue with the crazy, stamped metal cover.] Owen Murphy probably needs his/their own retrospective, too.
[11/2011 UPDATE: Thanks to Robin Edgerton, who has been working on the AT&T film archive, for pointing out that the correct title was Incredible Machine, not The Machine, as MoMA’s press release had it. You can watch Incredible Machine online.]
That will give us a chance to appreciate the backlit photomurals 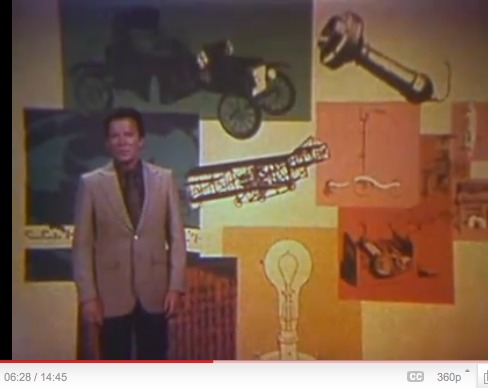 and the rather incredible prop circuitboard dioramas. [I left the timestamps in for easy reference.] 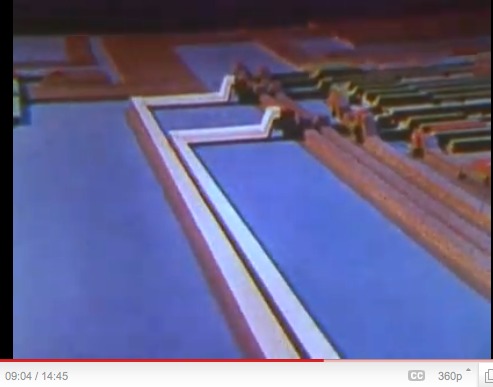 Shatner marvels for us at the minute intricacy of circuitboards reduced to eye-of-a-needle-sized microchips. Microchips which are apparently still designed in large-format, paper schematics.
Which are drawn. With a pen. By a [computer? punch card? stencil?] controlled mechanical printer. 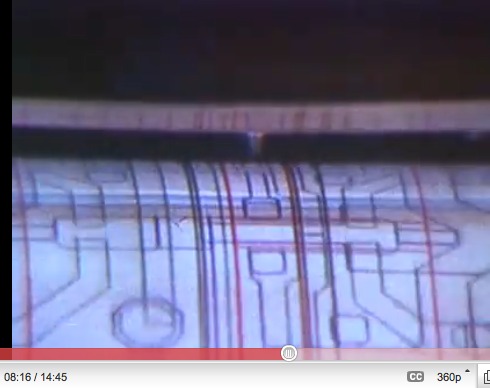 Holy crap, people, this is a drawing. 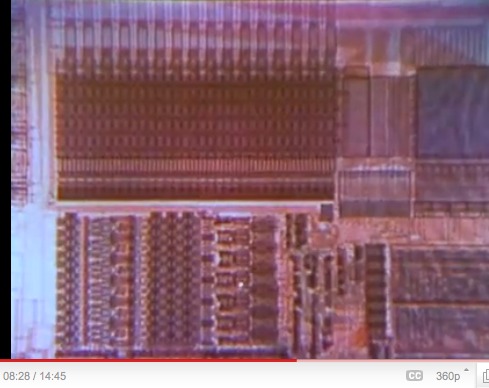 Turned into a backlit transparency, but whatever. A DRAWING. 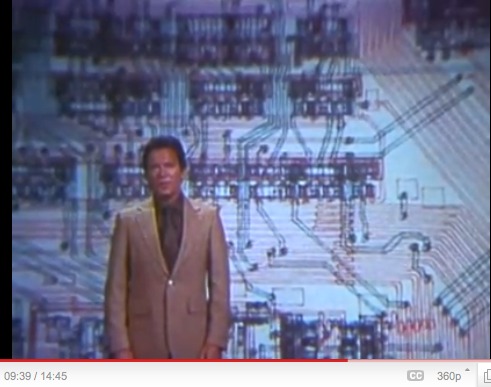 Jean Tinguely’s Metamatics drawing machines, we know. Olafur Eliasson’s studio folks set up that acoustic drawing machine at Tanya’s in 2008. [Wasn’t there also a thing with pulleys that drew on the wall? Who was that?]
Anyway, just saying, there are–or were–amazing drawing machines creating amazing, massive drawings, in the service of America’s most advanced scientists and engineers–who apparently didn’t bother keeping them? Where are they? What are/were they? Do any survive? What else could they be used for? I think I must find the answers to these questions.
UPDATE: ASKED AND BEGINNING TO BE ANSWERED
Thanks to Beau [aka @avianism], who points me to pen plotters and their adaptation and creative deployment, apparently in the last few years, by artists such as Douglas Repetto, whose drawing below, is part of the chiplotle group on flickr. Chiplotle is a Python library created by Repetto and Victor Adan at the Columbia University Computer Music Center which allows you to code for and operate pen plotters from a laptop. The future of the past is here.
UPDATE UPDATE And whaddya know, via @johnpyper, there is a show of the Spalter Collection of computer code-generated art right now at the deCordova in Lincoln, MA, which includes, of course, Stan VanDerBeek, who worked on early animation and computer graphics languages at Bell Labs.