Oh, RO/LU, you are so awesome for posting this. 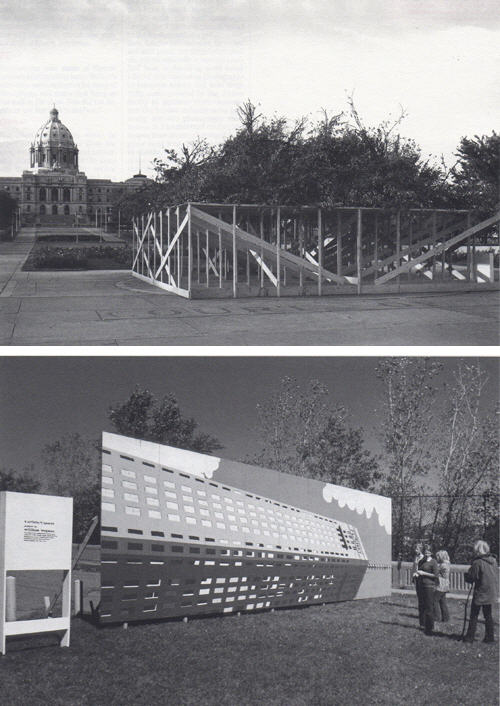 9 Artists/ 9 Spaces was a public art exhibit organized in 1970 for the Minnesota States Art Council, while the Walker Art Center’s new building was under construction. The concept of creating temporary, site-specific works was almost unheard-of, but it’s since become an international norm of public art practice. The show was organized by none other than Richard Koshalek, who was assistant curator at the Walker at the time, but who is now the director of the Hirshhorn Museum.
From a purely practical standpoint, I’m afraid Peter Eeley is right, 9 Artists/ 9 Spaces “proved in many ways a disaster.” If anything, Eeley’s list of problems–“works were vandalized; damaged by accident; and shut down by the police for reasons of safety, fear, and improper permitting”–completely undersells the near-total mayhem surrounding the show.
Fortunately, Peggy Weil published what is apparently the first extended history of 9 Artists/ 9 Spaces as part of a larger exploration of public art. It is truly incredible.
Just one incident: William Wegman wanted a large vertical image to be rendered in horizontal format, so he proposed a large billboard painting of Minneapolis’s Foshay Tower on its side. The work, unfortunately titled What Goes Up Must Come Down, was installed on the U of M campus. Only no one notified the campus police of the project, and they freaked and called the FBI, who “showed up at Koshelek’s office the next morning to inform him that they’d read it as a bomb threat and dismantled it.”

Wegman himself posted about the 40-year-old show on his blog a couple of weeks ago, after being contacted by the Walker; the billboard is apparently featured in a new tapestry created for the museum by Goshka Macuga. In fact, digging around a bit, almost the only info online about 9 Artists/ 9 Spaces seems to come from Weil and this Macuga project.
Whatever happened on the ground at the time now seems frankly awesome and entertaining; the very idea that public art could instantly provoke a wide range of heated responses seems almost quaint. But of course, such bemused hindsight requires an idealized, incomplete grasp of the political and cultural context of the show; the idea of bombings and long-term occupations of parks in St. Paul sounds positively surreal, but it happened.
The failure, really, is ours, for not remembering, knowing, studying, and learning from this rather spectacular-sounding show. Someone get me Koshalek on the horn!
Peggy Weil’s history of 9 Artists/ 9 Spaces, 1970-71, organized by Martin Friedman and Richard Koshalek [linkall.com, via RO/LU, who has other links and pictures]
What Goes Up Must Come Down [wegmansworld (!!)]