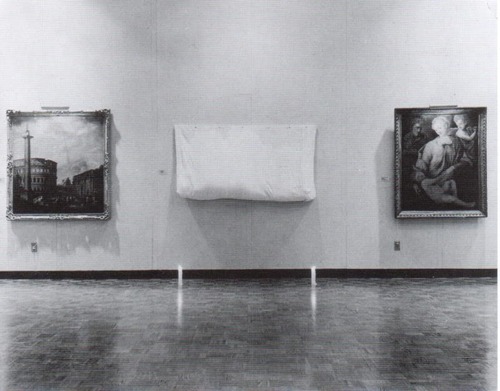 So I try to take a break from this [now rather long] exploration of the history of Robert Rauschenberg’s Erased de Kooning Drawing by reading my Avalanche magazines.
And there I find an announcement for Oh Dracula, a 1974 Chris Burden performance/installation which took place at the Utah Museum of Art at the University of Utah in Salt Lake City. Really? Yes.
October 6 – October 9, 1974, in fact, which makes it one of Burden’s earliest museum shows.
But it seems that the piece was not just organized by the museum, but as part of the Joint Conference of the Western Association of Art Museums and the Western Regional Conference of the American Association of Museums, which was held in Salt Lake that year. I’ve added it to the research list.
Avalanche said cellophane, but in a 2000 essay in Frieze Ralph Rugoff said canvas. Either way, Burden climbed into a “chrysalis”-like sac and had himself installed in between some of the museum’s exceedingly random 18th century paintings, with candles placed at his head and feet. And there he hid all day.
Rugoff’s piece is about invisibility; he talks about Burden’s hiding pieces, and John Cage’s silence, but not Erased de Kooning Drawing, even though his ending paragraph reminded me of it:

But perhaps the most salutary effect of invisible art lies in the chameleon-like array of meanings which have cloaked it over the past half century. Rather than simply serving as a static limit defining the no-go zone of artistic practice, it has alternately appeared under the guise of the Sublime, of social idealism, avant-garde aggression, personal humility and ironic commentary. No single artist has been able to possess invisibility as a signature medium, and its wayward history gently yet pointedly mocks our waning belief in the cult of originality. It suggests instead that art doesn’t begin and end in a physical frame or a singular context, but lives on in the potentially endless process by which we make use of it.

Oh Dracula isn’t mentioned in Burden’s current bio, and though I talked about Burden while I was lecturing at the University of Utah, no one there mentioned it to me, either. So it’s a different kind of erasure.
Touched by your presence [frieze]