I finally made it down to City Hall Park to see the Public Art Fund’s installation of Sol LeWitt structures. Which, first or now, you must watch the discussion of working with LeWitt at the New School. Go ahead, I’ll wait.
OK.
So along with the general admiration and pleasure of seeing so many LeWitts, the first thing I think is: picturesque. 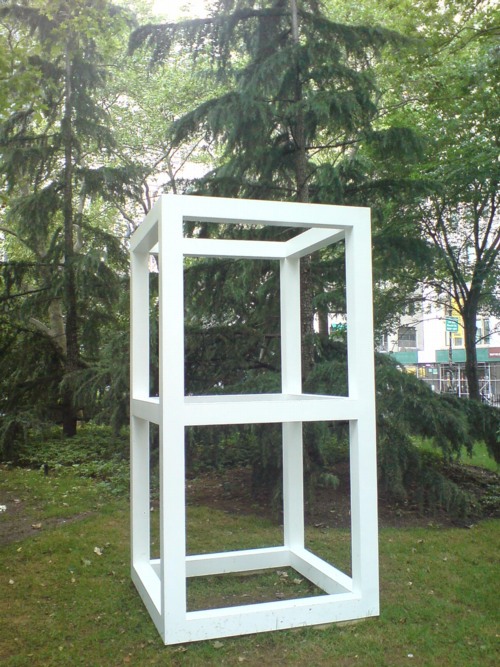 Double Modular Cube, 1969
Lewitt introduced human proportions into these modules, which may somehow account for why it feels like an idyllically sited pavilion or garden folly. But it’s definitely activating something in the landscape, too.
Then there is Complex Forms, 1987: 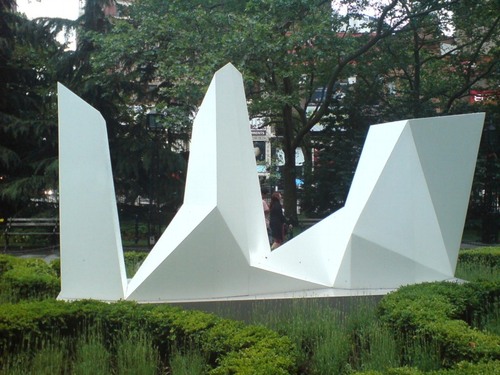 Which, I know, I know, every algorithmically-generated polygon around here gets tied to Dutch Camo Landscapes. But:

For the Complex Forms, the artist drafted a two-dimensional polygon and placed dots at various locations within it. As the form is projected into three dimensions, those interior points are elevated into space at different heights. The elevated points dictate the seams of the object’s multi-faceted surface.

So these things turn out to be topographies “projected” from two dimensions into three. Maps. So it is not a stretch. 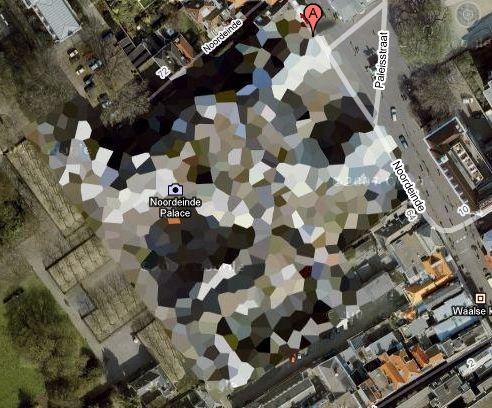 The way I found the Dutch Camo Landscapes in the first place was through architecture. They were 2D patterns generated from photos of 3D structures, which read as 3D structures themselves. As camo deployed against aerial surveillance, I’ve also imagined them as crystalline structures or surfaces, topographies, installed above whatever site is being obscured.
It’s to the point that last fall, I actually went to the Noordeinde Paleis [above] in The Hague, not *really* expecting, but kind of hoping, to see it sitting, safe from terror or whatever, under a giant, polychrome, polygonal tent. It was not. I’ll add that to my project list, though. [note to self: call Queen Beatrix.]
It also reminds me, even more explicitly, of Le Corbusier and Iannis Xenakis’ 1958 Philips Pavilion in Brussels, which, as these two models I found displayed shoved into a corner at ARCAM in Amsterdam one night show, was similarly constructed from 2-dimensional curves and points projected into space. 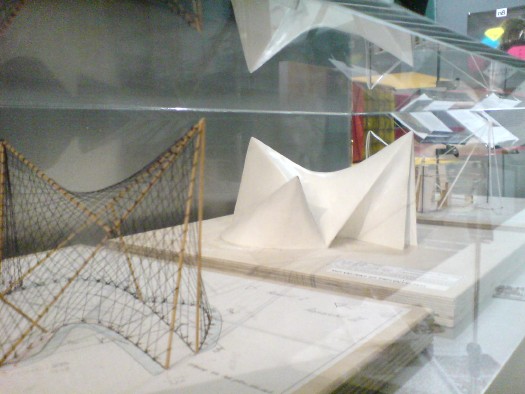 “The Complex Forms introduce irregularity into LeWitt’s work,” we are told, “which is further explored, for example,” in the Splotches. Which, again, two-dimensional drawing projected into structure via formulas for generating color and height. I can really dig these things, except–I didn’t photograph it, didn’t want to be a crank, but holy crap, I can’t stop staring at that seam. 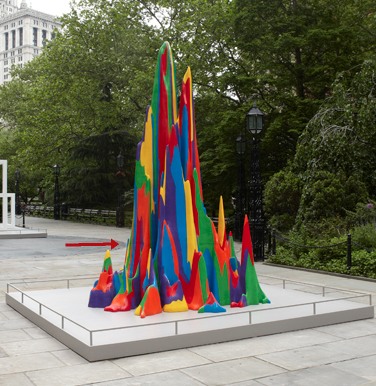 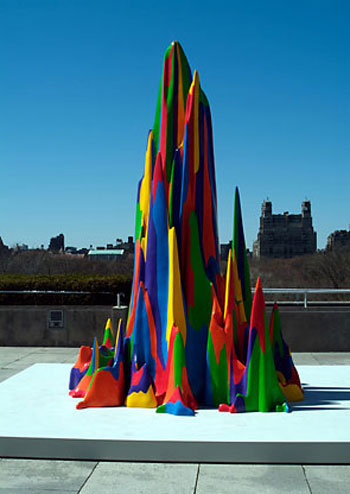 No, I do not think it was. What gives?
The next thing is how lush and classical City Hall Park is. Since this incarnation dates from 1999, I guess historicist is the right word. I don’t remember noticing this as acutely as I do now.
Maybe because so many LeWitts are installed along the park’s radial axis, lined up with that replica fountain just so. 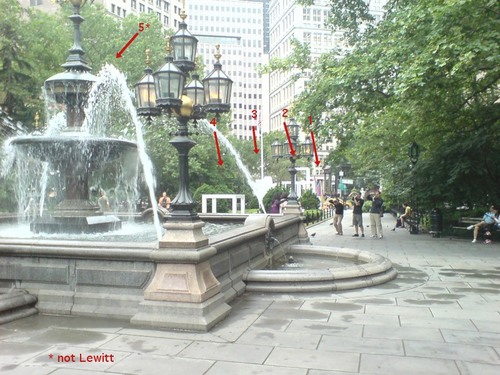 In his opening remarks at the New School, Nicholas Baume described the Public Art Fund’s program as “looking back at radical practices dating from the 1960s and registering their contemporary resonance.” He goes on to cite the appeal of seeing “the interesting juxtaposition of natural landscape [sic], New York City skyscrapers, and the architectural and decorative elements of the park,” which “provide a fascinating and rich context.” But now this installation, I get less sense of juxtaposition, and more assimilation. Radial historicism: 1. Radical practice: 0.
As I’m walking around, trying to figure out how to process this situation, I suddenly looked at the Complex Structures head-on, i.e., the “wrong” way. 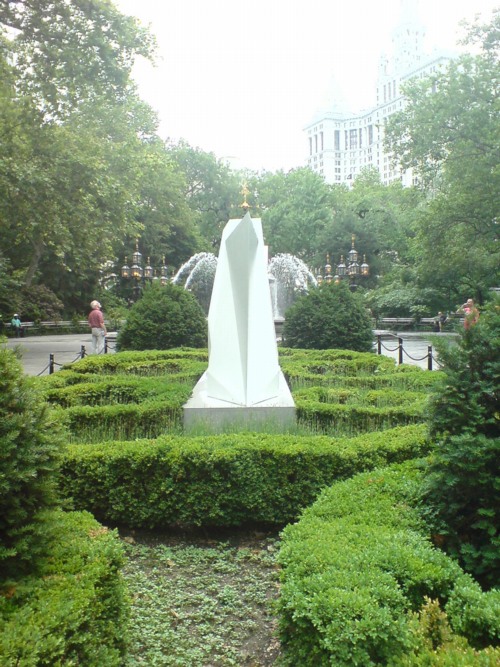 And it turns out to be radially symmetrical itself. A mirror image. And I remember writing about laughing at first at Chinese tourists who didn’t “get” the Iwo Jima Memorial, and who posed for photos at the head of the statue, only to realize they didn’t have the same LIFE Magazine photo-mediated historical context as Americans. 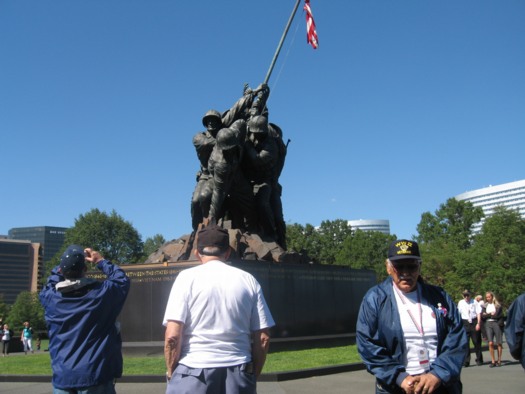 Connecticut veterans at the front of the Iwo Jima Memorial, image: ct.gov
Which, suddenly, LeWitt’s practice of projecting a 2D image into a 3D structure has an entirely new, complicated legacy which I’ve never seen addressed before, but maybe this City Hall Park is a good place to start.