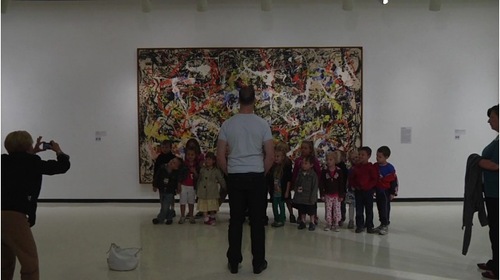 For his performance/project The Long Glance, Brooklyn-based artist Jonathan VanDyke spent 40 hours standing in front of and looking at Jackson Pollock’s painting Convergence, 1952 at the Albright-Knox Gallery in Buffalo. He carried this out over the course of one week last May/June, looking for eight hours/day, for five straight days.
The Long Glance was streamed live on the museum’s website, and he had his own wall label in the gallery which described him as a “living sculpture.” Hmm.
Artist Sal Randolph wrote about watching VanDyke online as he watched the Pollock.
The project and its audience all seem to have a resonance with The Artist Is Present, except, obviously, the artist’s counterpart here is a painting, not a person.
Thinking about these two projects together makes me interested to hear what VanDyke saw, and what he learned about Convergence, or about its creation, or its creator. Which is kind of funny, because I never had that sense about sitting with Marina Abramovic. I mean, sure, there were people who cried or emoted or developed relationships of some kind with her through sitting. But I always had a sense that the experience of sitting with Marina was its own objective, while looking at a painting is a means to an end: understanding.
And so I’m a little disappointed with VanDyke’s essay about The Long Glance because, while it is highly informed and expansive, it is almost entirely about the internalities of his own experience. Which is great, don’t get me wrong, just.
But maybe I’m missing the point: both VanDyke’s, and Pollock’s. In another post about The Long Glance, Randolph quotes extensively from Alan Kaprow’s 1958 examination of the experiential nature of Pollock’s Action Paintings:

The space of these creations is not clearly palpable as such. We can become entangled in the web to some extent and by moving in and out of the skein of lines and splashings can experience a kind of spatial extension. But even so, this space is an allusion far more vague than even the few inches of space-reading a Cubist work affords. It may be that our need to identify with the process, the making of the whole affair, prevents a concentration on the specifics of before and behind so important in a more traditional art. But what I believe is clearly discernible is that the entire painting comes out at us (we are participants rather than observers), right into the room.