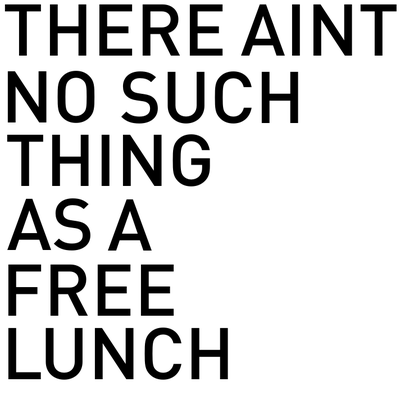 The classic saying, so closely associated with the conservative icon economist Milton Friedman, just sort of came out last night during a brief Twitter discussion with Bill Powhida and Magda Sawon about what, exactly, my point is on Rirkrit Tiravanija’s gorgeous, mirrored objects.
And basically, I think it comes down to my dissatisfaction with what feels like the persistence of a critical adulation of Rirkrit’s socially oriented practice–and, by extension, Relational Aesthetics generally–as anti-market, anti-commodity, gifty experientialism, which does not acknowledge, must less seek to understand and account for, the beautiful luxury goods at the center of so many of these projects.
This seeming contradiction or paradox–I will not call it hypocrisy, at least not on the artist’s part–should be adding a level of complication and contestation to Rirkrit’s work. Instead, it’s reduced to the critical comfort food of free soup and socializing.
I think Rirkrit knows about the “there’s no free lunch” concept, at least on some level. Thanks to Friedman and to Robert Heinlen before him, who popularized the acronym, TANSTAAFL [There Ain’t No Such Thing As A Free Lunch] in a 1966 sci-fi story about lunar colonists rebelling against their earthly overlords, the saying is pretty deeply embedded in the history of postwar liberalism and globalization, the very political and philosophical context Rirkrit’s work engages [and from which he appropriates so many of his forms.]
So now, against my better judgment, perhaps, I think I want to take a closer look at Rirkrit’s practice and the Relational Aesthetics construct from the perspective of Friedman’s foundational libertarianism. It’ll be like opposition research as art criticism. Or maybe it won’t be. To ignore the highly market-oriented aspects of Rirkrit’s work, and focus solely on the dinner parties and sleepovers is to almost perfectly miss Friedman’s point: nothing comes without a cost; it’s just a matter of identifying it and figuring out who’s going to pay.
While no one seems to be paying much critical attention to Rirkrit’s objects specifically, Relational Aesthetics and its evangelist Nicolas Bourriaud have been worked over repeatedly by other critics in ways that can implicate and/or illuminate these shiny baubles. Claire Bishop, Miwon Kwon, and Stewart Martin are just three prominent voices in the debate, which takes RA to task for both feeble anti-aestheticism [Bishop], and for neutralizing and commodifying social practice within the institutional apparatus [Martin]. I really don’t have the chops or the stamina to lay all this out right now [or maybe ever, who knows?] But the Radical Cultural Research Collective’s RA critique critique provides a handy reference point, as does Dave Beech’s horribly formatted analysis of participation.

What I can do right now, though, is ogle this awesome book cover from 1949, which just became a study for a painting I will have to make. This slim book, TANSTAAFL: A Plan For A New Economic World Order by the hard-to-research Pierre Dos Utt, is one of the earliest published references to “ain’t no free lunch.” 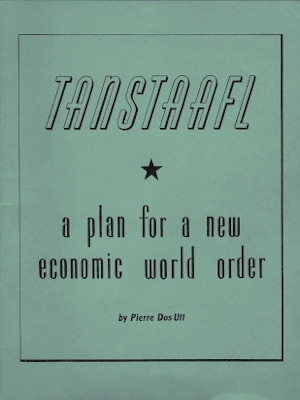 The phrase has its own Wikipedia page, of course.
There ain’t no such thing as a free lunch. [wikipedia]
thanks to Brent for help in approximating Rirkrit’s font for the mockup up top.