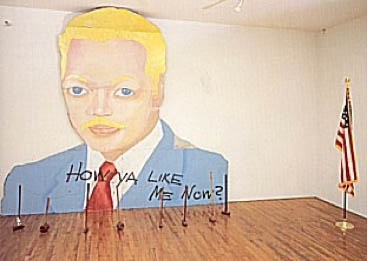 How Ya Like Me Now?, a large painting of a white Jesse Jackson by David Hammons, was one of seven outdoor works in “The Blues Aesthetic: Black Culture and Modernism,” an ambitious exhibition organized in the Fall of 1989 by Richard Powell at the Washington Project for the Arts.
The other six outdoor artworks were installed without a hitch, but approval for Hammons’ painting to be erected on a DC city-owned parking lot dragged on for six months, three months after the show opened. When the OK was suddenly given [with no explanation of either the delay or the decision], WPA staffers hurriedly erected How Ya Like Me Now? on the lot at 7th & G Streets [where the Verizon Center currently sits], across the street from one of the intended target audiences for its questioning title, the National Portrait Gallery.
The NPG had no portraits of blacks on display at the time. And Hammons suggested that a portrait of Jackson, arguably the most prominent African American in the US in 1988, would already be in the museum if he’d been white. Jackson had lost the Democratic Party’s nomination for president to Michael Dukakis after hitting a wall of white voter resistance in Wisconsin, a phenomenon of racist reluctance pundits called “the Bradley Effect.”
But a billboard-size portrait of a pink-cheeked Jackson suddenly appearing on the streets of DC with no explanation and a Kool Mo Dee lyric for a title was bound to arouse controversy. And when WPA curator Powell, who is black, left three white staffers to finish installing the piece, a crowd of young black men formed, voiced their protest against the artwork–and then took a sledgehammer to it and tore it down. 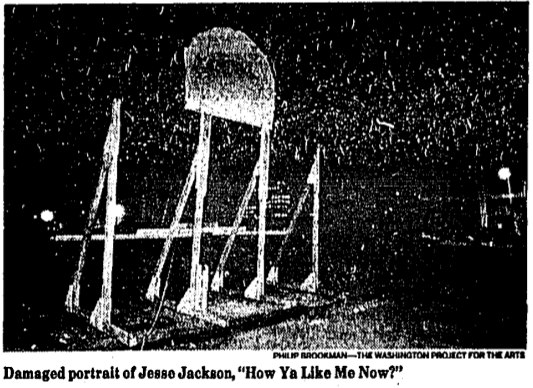 The Washington Post showed a photo of the only piece left standing on 7th Street, Jackson’s blonde afro and part of his blue eyes. After some back and forth in which Hammons kind of complained that the WPA did not install the work as high off the ground as had originally been called for, and the WPA complained about the city’s footdragging delays and said it was going to send the scalped Jackson back to Hammons for repair, the damaged tin painting went back on view, encircled by hammers, for the remainder of the exhibition.
All of which makes me very interested to know when and how How Ya Like Me Know? ended up in its current home in a private DC collection.
The most complete account of this story I can find online is this 1998 Duke Alumni Magazine article on RIchard Powell, who went on to become a very prominent art historian and author [duke.edu]