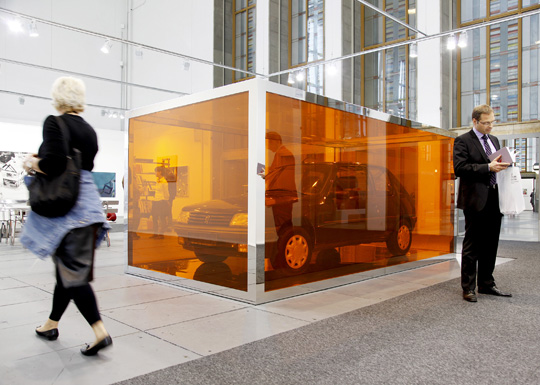 image via artreview
Oh, man, oh, man. I think this clears up a lot. Finally, here is a quote that gives some insight on Rirkrit Tiravanija’s approach to art objects and object-making. The artist is discussing the making of Untitled 2010 (All the days on the Autobahn), 2010, which was purchased by the Foundation for the Association of Friends of the National Gallery Berlin for Contemporary Art:

untitled 2010 (all the days on the autobahn), is a work extending from a series that I have been working on over the past ten years. It is biographical and also a documentation of the artist and art in action, where the boundaries of life and art merge into one becoming indistinguishable from each other. The artist in his daily life; his movement through time and space becomes his practice. In response to the quotation above which I said many many years ago, the question for me as an artist is how does one continue to make art after Duchamp’s readymade? In some ways I found art to be defined by the action taken upon the object, the use of the object when one lives with it; with action and usage one is asked to form meaning. The Peugeot 205 was a car I drove while living in Berlin, it was an economical and efficient utility vehicle – it took me to many places where I had to travel for work, and a so I formed a deep relationship with it. Over time and with all my other concerns, the car became redundant and I placed it aside, and with this work, I encased it and returned it to its original state — as the readymade. On its heel (rear left wheel) a riddle can be found written on a crushed up coffee cup that states, “is this all there is to life”. [emphasis added] 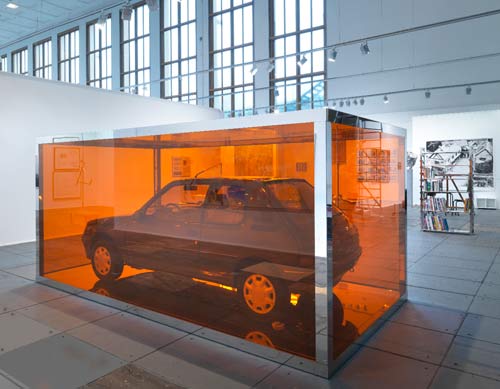 So the functional objects of the artist’s daily life/practice become redundant [in the US or the British sense? I don’t know], and then convert–or revert–to readymade status. It’s the ultimate upcycling. But that doesn’t quite explain the mirrored steel & Perspex vitrine; can a readymade exist within a custommade?
I can’t think; I’m too distracted by the chrome Autoprogettazione bookcase in the back there, part of neugerrimscheider’s vast, shiny booth at last year’s Artforum Berlin. Do want.
#70 Rirkrit Tiravanija | untitled 2010 (all the days on the autobahn), 2010 [vfn-stiftung.org]
Previously: Transactional Aesthetics, or the highly collectable Rirkrit Tiravanija
howtospendit.com +rirkrit
There’s No Such Thing As A Free Lunch