The new issue of Public Art Dialogue is out–as you know, right?–and it includes an article by Drake University art historian Maura Lyons that looks at how Disney, photography, and Ken Burns altered the Gettysburg National Military Park.
In the 1990s, the National Parks Service decided to reconfigure Gettysburg toward a “historically authentic” representation of the landscape as it appeared during the pivotal three-day battle in 1863, emphasizing the sites of action. After visiting the battlefield last year, I wrote [and wrote] about the problematic inconsistencies and selectivity of the strategy, which seemed to me like a retrofitted justification for an anti-modernist campaign to remove Richard Neutra’s Cyclorama building. Which it may still be, but not only that.
The NPS, Lyons argues, was trying to shore up the memorial’s relevance–and revenue–by responding to other presentations of Civil War history:

The landscape historian Brian Black has argued that the new direction for preservation at Gettysburg was partially motivated by the fact that, during the 1990s, the Walt Disney Company was planning to develop a historically themed park named Disney’s America in northern Virginia…NPS identified Disney as a possible economic threat an moved to solidify Gettysburg’s historical landscape as an authentic and authoritative one. In these efforts they could take advantage of a feature that Disney did not possess: the national park’s location on a notable battlefield.

Part of what helped kill Disney’s America, of course, was its proximity to another major Civil War site, the Memorial in Manassas to the Battles of Bull Run. 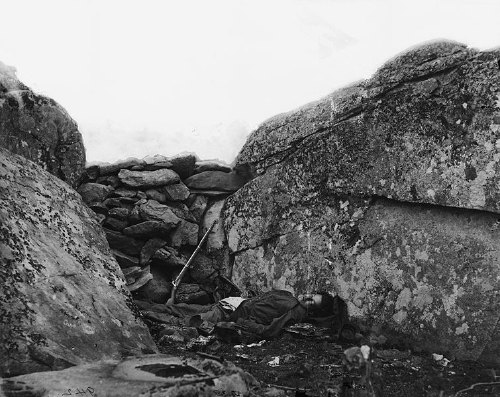 Alexander Gardner, The home of a Rebel Sharpshooter, Gettysburg 1863
As for photography, Lyons cites Gettysburg Then & Now, William Frassanito’s decades-long research project to identify and reshoot the sites of vintage, battle-era photographs. And a study by Jim Weeks, who found that

the desires of visitors, who want to see visions of the battlefield familiar to them from historical photographs, particularly from their deployment in Ken Burns’ documentary series The Civil War…helped prompt the restorations of the last 20 years… Weeks observes that “While in earlier phases Gettysburg controlled its image, by the latest phase images controlled Gettysburg.”

Lyons, Maura, “Memorialization and Marginalization: Vernacular Sites and the American Civil War,” PAD Journal, vol. 1, no. 2, pp163-191 [tandfonline.com]
Previously: Some pointers, or what to do with Neutra’s Gettysburg Cyclorama Center?