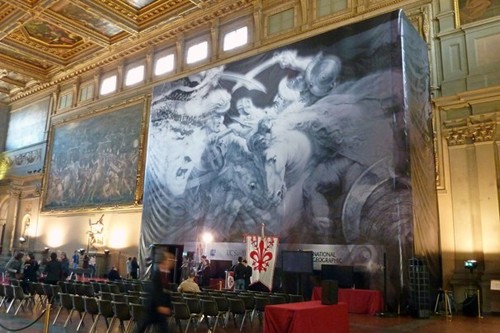 image: DARIO THUBURN – AFP/GETTY IMAGES, see washpost for fullsize
There has been much talk among such circles about the possibility of a lost, unfinished mural by Leonardo da Vinci hidden behind a fresco by Giorgio Vasari, in the Palazzo Vecchio in Florence.
Leonardo’s original work, The Battle of Anghiari, executed in 1504, was replaced in 1564 by Vasari’s 5-fresco cycle. But art historians following an interpretation of a clue in one mural discovered it was painted on a false brick wall, and there was an airspace behind it.
And now there is also paint. National Geographic, which purchased the exclusive first rights to the controversial investigation, today announced the discovery of Leonardo-era pigments in the hidden airspace.
The press conference was held in front of the mural[s], which were covered by a giant, digitally printed photomural, actually a detail of a Rubens drawing of the Leonardo original.
If there is, in fact, a Leonardo back there, which has been hidden, or even lost, for nearly 500 years, I honestly don’t see the hurry to uncover it now. Critics of the project are right to protest the possible damage or destruction of the Vasari the search–or worse, the discovery–may inflict. But if we have, in just the last few years, developed the tools to detect the space and the Leonardo, isn’t it best to sit tight, and wait for technology that can preserve both artworks intact?
At least just wait like a hundred years or so, for the current crop of Da Vinci Code knuckleheads to die off. And in the mean time, why not just put up a giant photomural version of Rubens’ copy? 99.9% of the 8 million visitors who’d see it each year wouldn’t mind–or even notice. 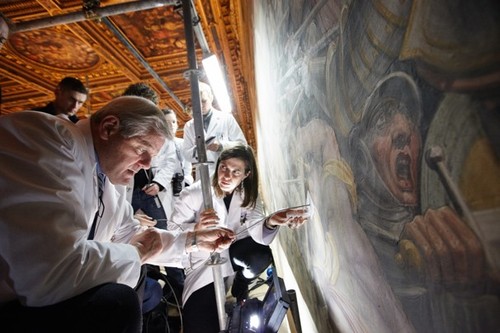 Sen. John Kerry and team use a probe to look for what they believe may be Leonardo’s Battle of Anghiari behind a fresco at Florence’s town hall. Photograph: Dave Yoder/AFP/Getty Images
Art historians say they have found evidence of ‘hidden’ Leonardo da Vinci [guardian via galbraith’s twitter]