I tell you, now I cannot get enough of that Henry Codax.
Fortunately, Codax isn’t letting a little auction setback, or the fact that he’s a fictional character from an anonymous corporation’s collectively authored novel, cut into his practice. Or his brand. The more I think about it, Jacob Kassay’s insistence to Christie’s and their bidders that his name should not be associated with Codax’s painting ends up reaffirming Codax’s own authenticity. Untitled (Dark Grey) is NOT a stealth Kassay; it is what it’s certified to be: a Henry Codax painting.
And for those wondering about Olivier Mosset’s rumored/reported involvement, and asking why we’ve never seen Mosset and Codax in the same room, hmm? Well. 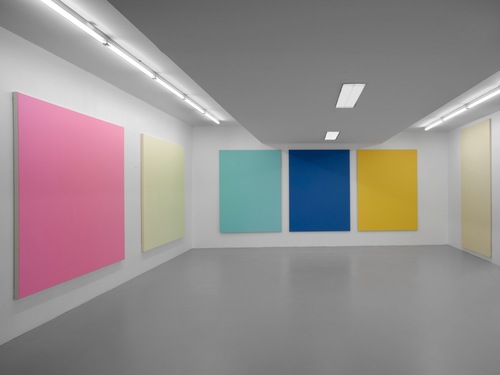 [l to r] Henry Codax, Hugo Pernet, Olivier Mosset, at Triple-V, photo by André Morin via Triple-V.fr
Just two days after the Christie’s non-sale, Triple V, a galerie in Paris’s 13th, opened an all-monochrome group show featuring Henry Codax, Stéphane Kropf, Hugo Pernet–and Olivier Mosset. So there you go.
Mosset and Kropf have shown with Triple V before, and Kropf has shown with Codax before, at Susanna Kulli in Zurich last October. Birds of a feather.
Triple V’s show sounds quite nice, providing examples of artists’ differing engagements with the history of the monochrome. Pernet’s triptych, Rouge, Jaune, Bleu #2, 2012 [above, center] is the chromatic negative of the Ellsworth Kelly triptych that gave it its title, Red, Yellow, Blue. The two door-shaped Mosset paintings [right] are from 1979-80. Kropf’s painting counters the idea of monochrome as content-free by showing all the drips and traces of its making. And Codax. The gallery’s announcement for the show, provided by one of Triple V’s Vs, Vincent Pecoil, only adds to the possible explanations for Codax:

I won’t translate the whole thing, but just pick out the two new possibilities. The first is that the fictional character Codax might be “inspired by real facts,” an actual painter out there somewhere. [We can somehow process this distinction between fact and fiction when it comes to novels and movies, even if we do it by insisting on conflating authors and actors with their creations, even after their obligatory denials. 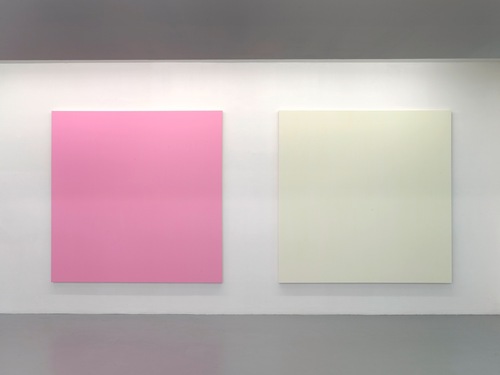 Henry Codax, Untitled (Bubblegum Pink) and Untitled (Day-Glo), 2012, photo by André Morin via Triple-V.fr
The other possibility, which seems new to me, is that Codax may be a collective, anonymous project of the Reena Spaulings/Bernadette Corporation itself/themselves. Corporations are people artists, too. Yet all explanations remain resolutely unconfirmed. And what’s wrong with that?
What little we know of Codax comes from fiction, but his paintings are real, physical facts. As the ambiguities about the artist persist, even multiply, the paintings remain unchanged. When I first saw Codax’s work last summer, it intrigued me. I liked it, but worried that it might be a stunt, a one-liner in the form of a show. But Codax keeps making and showing work. And selling it, sometimes to people who try to flip it. And getting reviewed and written about. At some point, it’s possible that the persistence of Codax’s paintings may overcome the uncertainties of their origins. We’ll just accept them–and buy and sell and show them–for what they are: Henry Codax paintings.
09 mars — 14 avril 2012 Henry Codax, Stéphane Kropf, Olivier Mosset, Hugo Pernet [triple-v.fr]