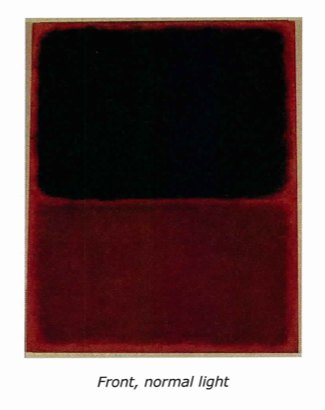 Just read the complaint in De Sole v. Knoedler Gallery [Case 1:12-cv-02313-UA], and it’s pretty awesome. If you like getting utterly defrauded of $8.4 million for forged Rothkos, that is.
Anyway, the image comes from the materials analysis, which was done by the same outfit to flag the forged Pollock that Knoedler’s getting sued over. They found stretcher crossbar marks where there shouldn’t be any, and anomalous primer and underpainting that didn’t match Rothko’s practice at all. The conclusion was that the painting was made on a reused canvas long after it was purported to have been painted.
Also, the provenance is the killer, since the De Soles are charging that Knoedler and Ann Freedman repeatedly claimed that the supposed Swiss collector whose son was selling the paintings was their own confidential client. In truth, they had no $#()ing clue where the merch was coming from, except for that Glafira Rosales, ye random secondary dealer, was claiming to have a massive stash of postwar masterpieces.
It all seems so stunningly false. And there are misspellings in Freedman’s documentation that, seriously, I would be having major reservations about giving $8 million to someone who can’t spellcheck summery.
Oh, what the hey, here’s the complaint [443k, pdf]. Enjoy.