Well that’s an unexpectedly awkward situation I just stumbled into. 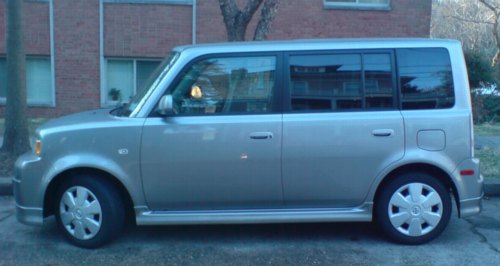 greycu.be: what, you mean your car doesn’t have a domain name?
A week or so ago, I decided my new car needed a domain name. So I registered greycu.be. Partly because the tweeters these days are all hot for the short URLs. But mostly because my car, a little art hauler and storage unit runner, is a Scion xB. Which is the perfect canvas upon which to realize my previously all-talk idea of commissioning artists to do vinyl wrap art cars. [additional posts here, here, and unfortunately, here.]
Needless to say, greycu.be was available. But it did get me to thinking, so I threw whitecu.be into the whois search for the Belgian DNS operator. And it wasn’t registered, per se, but “quarantined.” A 40-day limbo following the non-renewal of a domain name on dns.be. Which went until April 1. And sure enough, when I checked in this evening, whitecu.be had been released. So I registered it. 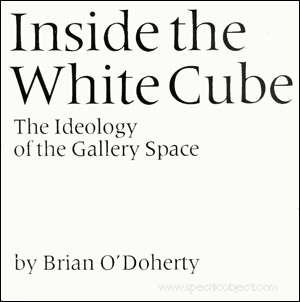 I confess I have no plans for it at this point. And also that buying it was motivated partly by the sheer novelty of being able to buy a domain name again after it has expired, something the shady/annoying backorder/resale adsquatting “services” in the US domainspace have made basically impossible. [I happen to be at least the second owner of greg.org; the first, an outfit called Global Real Estate Group, had let it expire in 1997.]
But even in this somewhat oddly punctuated, awkwardly unpronounceable incarnation [whitecu dot be? whitecu point be? whitecu pwahn be? It just doesn’t work, except as web text], a chance to connect with one of the foundational paradigms of contemporary art theory was too awesome to pass up.
Since they first appeared in Artforum in 1976, Brian O’Doherty’s essays, Inside the White Cube: The Ideology of the Gallery Space have provided a powerful critical framework for examining the impact of the commercial art market on the creation and exhibition of art. Even 35 years on, artists grapple every day with the political and financial implications of the white cube, which persists as the central site of art’s instantiation as a commoditized luxury good.
Which has been deeply influential on my own education and experience with art, and with my history as a collector, and more recently as a writer and maker. 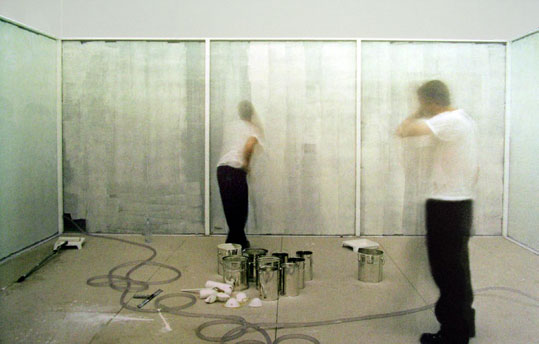 Powerless Structures No. 15/12 Hours of White Paint, 1997, Elmgreen & Dragset
Which is presumably why, in 1993, Jay Jopling chose to name his London gallery White Cube. Now he has three, and they’re among the most important and well-known in town. Their website is whitecube.com.
Which would seem plenty clear, distinct, and obvious, unlike, say, whitecu.be. Yet it turns out that Jay did not think so. Or at least he thought that the artist and gallery portfolio hosting service that went up on whitecu.be last year looked a little too similar to his gallery’s web presence. Or that any reference to a white cube was de facto confusing to his 2008 [!] trademark on the term. Because he filed a trademark infringement claim with dns.be against the service’s creators attempting to have the domain name canceled. 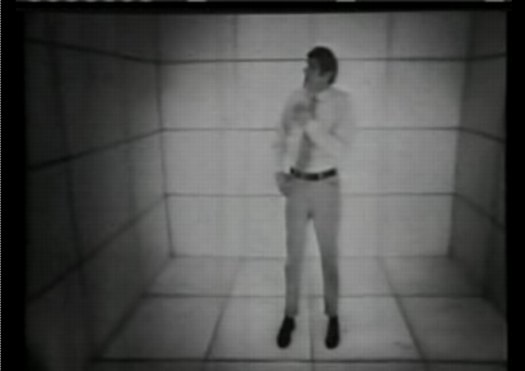 Still from The Cube, a 1969 NBC teleplay by Jim Henson about a guy who finds himself stuck in a white cube.
The site’s creators, a pair of young designers in Florida, prepared a lengthy response to Jopling’s claim, but apparently they did not formally respond to it. And so the third-party arbitrator appointed by dns.be issued an extraordinary ruling in Jopling’s favor. The findings for which seem to ignore the entire basis of the domain name and TLD system:

The mere fact that the Licensee inserted a full stop between the letters “cu” and “be” is not likely to outweigh the massive similarities and the replications of all the letters contained in the Complainant’s trademark, in the same order, with the same meaning.

And which also ignores the highly significant, and widespread common use of the term “white cube” in an art context and its history which predates Jopling’s commercial use and [very recent] trademark claim for the term. And which ubiquity was, in fact, the reason Jopling chose it.

And then there’s a remarkable finding of bad faith:

It is obvious from the record that the intention of the Licensee was to divert internet users from the domain name by creating a likelihood of confusion with the Complainant’s trademark.
It is the opinion of the Third party decider that this clearly constitutes a case of typo squatting, with the intent of commercial gain and potential damage for the distinctive character or the reputation of the Complainant’s trademark.

Well, I still don’t know how to say it, or what it’ll be used for, but the new owners of whitecu.be can assure you that it will not be in the business of being mistaken for Jay Jopling’s fine and reputable establishment. Which is at the obvious, widely known, and easily pronounced whitecube.com.