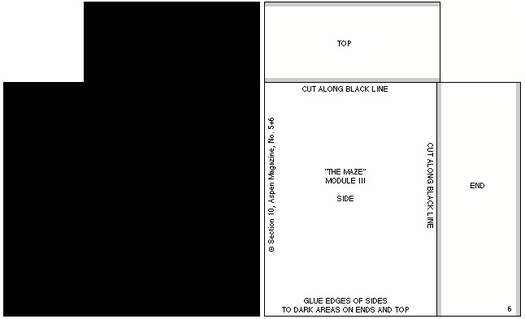 For issue 5+6 of Aspen: The Magazine in a Box (1967), guest editor/curator Brian O’Doherty conceived of a conceptual art exhibition in a box. [Which really should be staged in real space somewhere. Has it ever been?]
One of the first things you notice when you open the box is the little stack of cut and scored black matteboard, which is a make-it-yourself scale model of Tony Smith’s The Maze (1957 1967).1 When assembled, if any ever were, the pieces formed four monolith-like blocks, which were to be placed in an open rectangle:

As is clear from the drawings, “The Maze” was originally designed for a particular space. Thus the pathways around the pieces as well as through it are an integral part of the design. For this reason it is a labyrinth rather than a monument.
I did not think of the symmetry of the piece as I was doing it, but I happened to notice when making the drawing that the central part is a five-foot square; the part including all the passages is a ten-foot square; then if you take the extension along the room, it is a fifteen-foot square. So it is a lot of expanding squares.
On the other hand if you take different divisions, for instance if you take all these squares and carry them through, they make a grid which interpenetrates– the two sets of grids interpenetrate one another. In a certain sense it is a labyrinth of the mind. You can see that it becomes quite complex, but at the same time everything falls in very, very simply.
–Tony Smith
The Maze was designed for the exhibition Schemata 7, at Finch College Museum, May 1957 1967. The above statement has been adapted from the catalogue.
The actual dimensions of the modules were 6’8″ by 10′ by 30″ (two modules) and 6’8″by 5’by 30″ (two modules). The models have been scaled down to fit in this box. The models may be set up standing free on neutral ground. They should be set up in accordance with the plan indicated in the drawing. Those who wish to reproduce the work in its original dimensions (in metal or wood) may do so.
The individual pieces may be cut from the enclosed cardboards by a matte-knife (e.g. the General 850 available at any art supply store) guided by a metal ruler.
The parts should be attached as indicated i.e. the appropriate edges should be opposed to the grey areas. (Elmer’s Glue All may be used). “White” edges should be darkened with ink or water color.
The drawing below may serve as a guide.

It’s been more than 14 years since I discovered Aspen; 5+6 was the first, and for a long time the only, issue I could find. And it’s almost ten years since I found the entire run of Aspen reproduced on Ubu.com, a move which brought Aspen out of unciteable obscurity. And now it’s more than two years since I cooked up auraprogettazione, a comprehensive [sic] exhibition of the rare examples of instruction-based art work that the artist actually gave permission to make. And yet I only just now noticed that Smith authorized reproduction of The Maze. Has anyone ever done so? Before me, I mean, because I just added it to the list.
1: UPDATE So yeah, I thought 1957 was an extraordinarily early year for Smith to have exhibited an installation of four matte black minimalist sculptures, and at Finch College or anywhere. So Ubu’s text is incorrect, and Smith’s Maze was shown in Schemata 7 at Finch in May 1967, right around the time Aspen was published.
ANOTHER UPDATE Grace Glueck’s May 14, 1967 review of the opening of Schemata 7 says the show’s working title was “Walk-In Sculpture,” and gave each of seven artists a chance to show their attitude “to scale and enspheric space.” Of The Maze, Glueck wrote:

The room is kept in a subdued light and, though the scheme is simple, a walk among these gloomy, primeval presences evokes the feeling of an endless forest.

Sounds like a wildly different experience from the toy-sized cardboard model.
In addition to Smith, Schemata 7 featured work by Les Levine, Ursula Meyer, Brian O’Doherty, Will Insley, Michael Kirby and Charles Ross. So far, I can’t find any installation shots of the original Finch version, but I’m on it.
UPDATE 3 And here’s John Perreault’s review of Schemata 7 for the Village Voice. He puts it in the context of pioneering minimalism shows like Primary Structures, which had just happened a few months earlier in 1966. Still no pics, though.