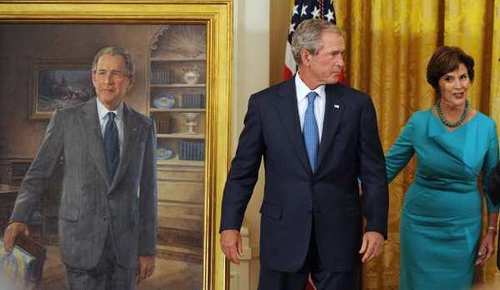 The first thing I noticed about George W. Bush’s official White House portrait unveiled yesterday was the way he stared off into space. Also in the painting. And the next thing was the painting-in-painting right over his shoulder. It was a western-style painting of men on horseback charging up a hill, and all I remembered about it was that it was Bush’s favorite painting, and that’s why he had it right next to him in the Oval Office.
Well, Christopher Knight has the almost too good to be true story of the painting, which was originally uncoverd by Jacob Weisberg in 2008. The work was commissioned from Wilhelm Heinrich Detlev Koerner in 1916 by the Saturday Evening Post, and it was apparently used to illustrate several entirely different stories over the years before finally acquiring the religious associations Bush fell in love with it for.
Knight goes into exquisite detail on them, but my favorite caption has to be from the painting’s 1917 appearance, “Bandits Move About from Town to Town, Pillaging Whatever They Can Find.” Bush said the posse reminded him of the people who served in his administrations, which, well.
[And if you’re wondering, yes, having Chinese Paint Mill make one is the obvious thing to do, and hell no, I’m still not going to make a near-lifesized portrait of George W. Bush.]
George W. Bush’s unusually frank portrait [latimes, image: Olivier Douliery, MCT via LAT]