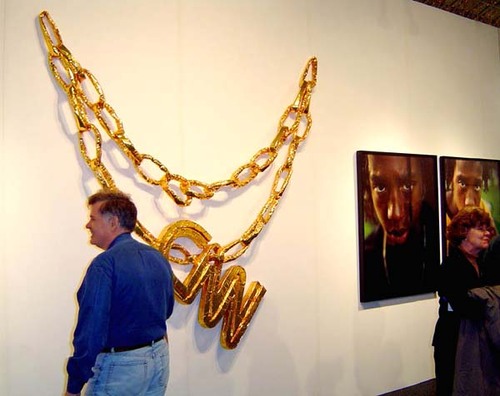 I fell for the first one ever saw, which was CNN, but in 2002 Thomas Hirschhorn started a whole series of gigantic, bling-inspired sculptures out of his signature, cheap-ass materials: foil, cardboard, mylar, and packing tape.
CNN was an edition of 50, published by Schellmann for Okwui Enwezor’s documenta 11, and it quickly sold out–and started getting flipped, as Pedro Velez’ artnet photo from c.2003 Art Chicago shows. 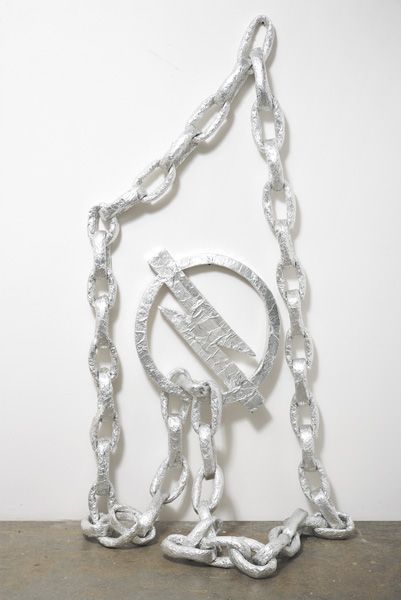 But the tricky thing is that though they were produced from the same crap as his mass edition, Hirschhorn’s other chains were unique sculptures. And that might have hurt them in the market. Phillips couldn’t sell Opel Chain (2002) for $60-80,000 in 2008, even though that was a bargain for a large-ish Hirschhorn at the time. 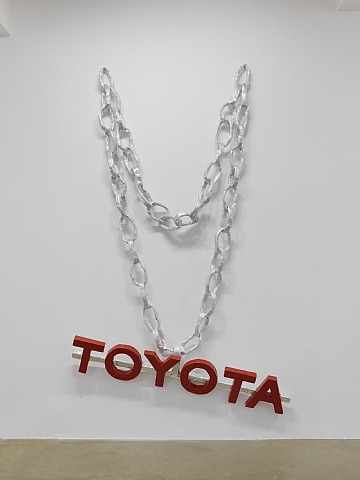 And though I’ll be forever grateful for introducing me to Hirschhorn’s work in the 90s, I could never ask what Chantal Crousel Galerie wanted for Toyota Chain (2002), but it was still hanging around in 2009.
I love Alison Gingeras’ quote from Parkett 57 (1999), for which Hirschhorn made an edition, Swiss Made, a giant, aluminum foil, cardboard, and packing tape watch:

Thomas Hirschhorn–an artist easily recognized for his persistent use of low-grade materials such as tinfoil, cardboard, plywood, plastic, and masking tape in his sculptural assemblages–perfectly illustrates cheapness in all of its senses. From the connotation of poor quality or shoddy standing to appearing easily made, despicable, or having little value, Hirschhorn has cultivated more than aesthetic consistency in his oeuvre. Underlying the objects that he fashions out of these meager materials is a sophisticated machine whose inner workings produce affects and interpretations that extend beyond mere formal statement. Cheap is no longer just an adjective; Hirschhorn makes it a procedure. 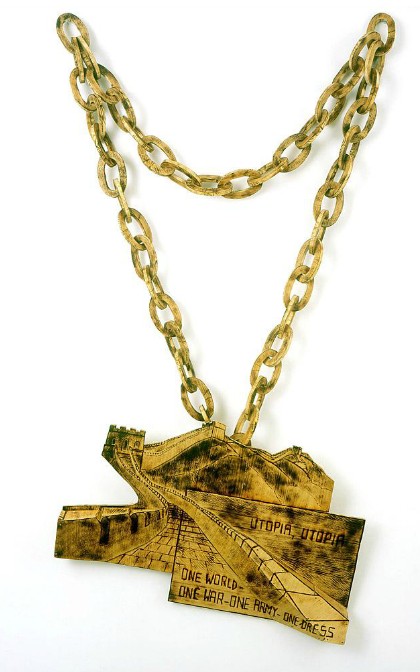 Wood Chain VII, Great Wall of China image: stephenfriedman
By 2004, Hirschhorn was making his large chain pieces out slightly more durable, more upscale wood, but I was not feeling it. I’m still not. So mylar and foam and aluminum tape it will be, simultaneously filling the Hirschhornian gap while saluting the three M’s: MOCA, Mercedes, and Mike D. Cheapness in all of its senses.