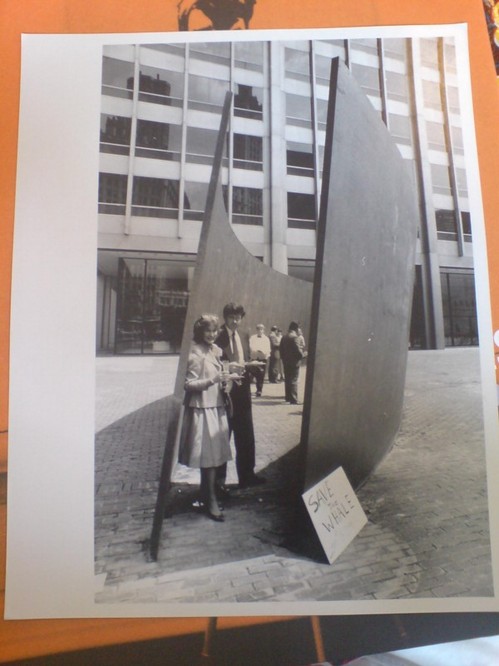 It’s Chicago Day here at greg.org; I just got my copy of Matthew Witkovsky’s rather amazing-looking exhibition catalogue for his show at the Art Institute, Light Years: Conceptual Art and the Photograph 1964-1977, along with this awesome photo from a little later, August 10, 1989, to be exact.
That’s when the folks at Chicago Sculpture ’89 and The Equitable held a reception inside Richard Serra’s 1986 sculpture, Call Me Ishmael, trying to raise $575,000 to purchase the sculpture for the city of Chicago. In a clipping from a Chicago Sun-Times article about the event, Serra’s sculpture is “said to depict a whale.”
Mhmm, not sure who said that. What’s not said is that Call Me Ishmael is basically two tilted arcs. Serra’s date for the work is 1986, after Tilted Arc itself was threatened, but before it was actually removed/destroyed.
Unlike Tilted Arc, Call Me Ishmael was not site-specific. Or at least, Serra has presumably approved the installations by its subsequent buyers, Doris & Donald Fisher, who loaned it to Stanford, though it was replaced last year.
Meanwhile, back in Chicago, not only did they not get the Serra, that plaza in front of The Equitable Building has since been host to two of the abso-$)(%ing-lute worst kitsch public sculptures ever: J Seward Johnson’s massive American Gothic remake and that Marilyn Monroe mess. It’s like the Chicago Cubs of sculpture up there.