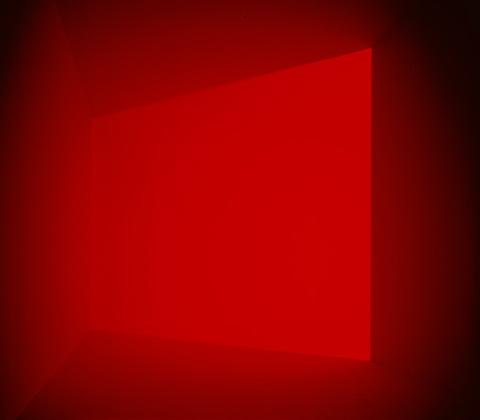 In the summer of 1994, MoMA installed a new work by James Turrell, A Frontal Passage, for the first time. I’ve seen it so many times since, now I can’t remember the experience of seeing it for the first time. But I do remember the experience of seeing Turrell’s one-man show at ICA Philadelphia in 1993, where I’d just started business school. There were a couple of light spaces, plus an anechoic chamber piece, some of his early corner projections, and a big table model of Roden Crater [which, frankly, made no sense at that diorama scale, and felt entirely, confusingly speculative, equal parts California real estate development and Richard Dreyfuss’ Close Encounters dining table.]
Anyway, while going through some envelopes full of slides [!] last night, I just found a MoMA Film schedule from July 1994 with some notes on it. And now I remember that I camped out in A Frontal Passage for a while, just standing in the corner, listening to peoples’ reactions, and then wanting to write them down. So I headed out in search for the first piece of paper I could find:

A Spanish mother and son awed into silence whispers.
“I don’t like this. I can’t see. I’m not going down there.”
“What is this? Is it so bad, he doesn’t want it seen in the light?”
A family comes in Grandma waits outside. Then the father goes out, gets her guiding her by the shoulders. She looks for a second or two, and then he guides her out.
Son to dad: Is there a floor?
Two elderly British ladies ask a guard, “Where’s the dark room?” He excitedly shows them the way. He stands at the hairpin turn his white shirt a beacon. “Hold onto the rail.”
“What’s the purpose? Where are we going?”
“Ladies, can you see me?” Some general jostling around the corner.
The eager guard: “And here it is.”
“What is it? A statue? Is that a statue?”
“No, that’s a man.”
I laugh and somewhat regret my intrusion.
“It’s the light at the end of the tunnel.”
“A little piece of heaven,” says the guard.
“Is that what it is?”
“I’m waiting for God to come out, I have some things to tell him,” smiling.
“Laddy, in World War II it was dark all the time. That’s what it reminds me of,” as they head back into the hall.
In the main gallery, “Oh, it’s so bright.”
“I remember when they said we could turn the lights on. It was so bright then.”

Previously: apparently, scribbling notes about Turrell is what I do
stumbling across an outdoor Turrell at Kijkduin