[L]ike all insular civilizations, [RG]’s evolved in a certain direction, it’s developed hard-and-fast attitudes about what’s beautiful and proper, and a corresponding need to defend those attitudes. It’s putting on a show, and it does what it knows how to do. The result is that it feels a little unbalanced to outsiders, in the same way as, say, ice dancing, or dog shows, or a lot of judged activities.

This notion of competition, judgment and the pursuit of perfection within an insular world happens to be a minor fascination/obsession of mine. At some point probably 10 years ago, after surfing past yet another aerobics world championship on ESPN3, I started a posterboard spectrum, which I changed to a 2×2 grid, and then just a bubble chart. All the sports and “sports,” I can find are laid out on it, from bodybuilding to dressage to cheerleading to college marching bands [both historically black and not]. Rhythmic gymnastics is there, too, in a cluster with regular gymnastics, synchronized swimming, ballet, drill team, and child beauty pageants. Here’s Phillips again:

There is, in the contrast between the poise and seriousness of the athletes and the princessy kitsch of the setting, something really kind of dark and wonderful. Just imagine it: devoting your life, mercilessly and with absolute commitment, to the task of dancing with little twirly clubs to a synth-folk soundtrack while wearing a spangled bathing suit designed to look like ladybug wings. Imagine doing that as well as it can humanly be done, being the person who embodies that accomplishment. I’m not making fun of anyone; I find it strangely noble.

I find it WTFcrazy. With two daughters of my own now, it feels like my parental prime directive is to steer these kids as far the hell away from these freakshows as possible.

I mean, how can it be that less than ten years after Chris Rock identified keepin’ his baby off the pole as a father’s only job, there is a petition by an Irish member of the International Pole Dance Fitness Association [which is different from the World Pole Dance Federation] to make pole dancing [or “Vertical Bar Dance”] an Olympic sport?
I haven’t figured it out yet, what it all means, but the more you think about it, these kind of esoteric, competitive evaluation systems are everywhere, and the desire to excel within them is, too: business, politics, religion, literature, art. Is the only difference popularity, which is apparently just a function of time? 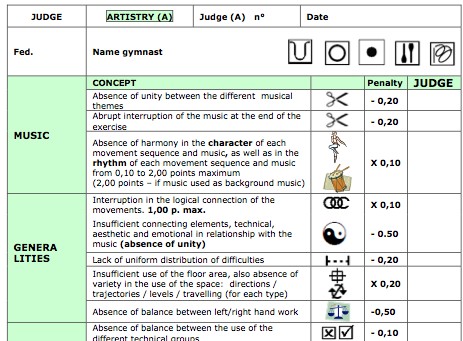 Maybe to achieve a Theory of Every WTF Thing requires looking beyond the gut, cultural affinities of a judged system, to its language, attempting a close read of the texts it produces. Phillips again:

RG has its own language, which non-RG initiates mostly perceive as a series of ultrasonic clicks and emoji hearts. What, for instance, is the precise distinction between the tournaments Miss Valentine 2012 (Tartu, Estonia, February 10-12), Pearls of Varna 2012 Academic (Bulgaria, July 2), and the 4th International Waves Cup (Germany, March 24)? I have read the rulebook in effect for the Olympics, the 125-page Code of Points: Rhythmic Gymnastics 2009-2012 [pdf], and let me tell you — you thought football had a lot going on. Between the aggro-ballet terminology (fouetté, entrelacé), the extensive use of pictograms, and the radical linguistic uncertainty (“The French version is the official text,” the front cover proclaims, in English), this thing reads like Finnegans Wake as drafted by the unicorn debate team.

Yes. RG has its own language. Just like everything else. And it has roots in aggro-ballet, and there are 43 words for ribbon twirling.
So the top hundred or so international sport and “sport” federations’ codes, preferably in print, to fill a bookshelf, and then to begin the data-intensive synthesis between them all. I’ll get right on that.
Sparkle Motion [grantland via @felixsalmon]