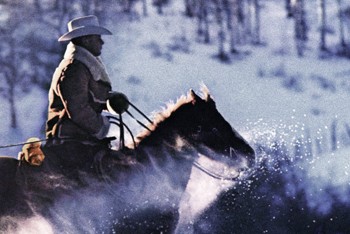 I so wish I was in town for this:

July 28th, 5-8PM, Eric Doeringer, Cowboy Photography Workshop
Artist Eric Doeringer will bring vintage Marlboro advertisements from his collection and will assist participants in re-photographing them in the manner of Richard Prince. Visitors will leave with a high resolution digital file and information on how to have it printed at a large size. Participants are welcome to drop in anytime during the workshop. There will be a small materials fee.

Just another day in the life of HELP/LESS, Chris Habib’s amazing show at Printed Matter.
Doeringer has searched out original copies of the Marlboro ads Prince began rephotographing in 1980, and began his own re-creation? re-enactment? re-performance? of Prince’s Untitled (Cowboy) photos last year.
After the jump, I’ve transcribed a section from Prince’s court deposition where he discusses his early rephotography process:

[Patrick Cariou’s attorney] MR BROOKS: Is it part of your message now that your artwork is more believable because it was taken from someone else?
MR. PRINCE: I don’t have a– I don’t really have a message.
Q: Okay. Is appropriating images from other people, does that also make your job easier in creating a new image?
A: No. Not really, no.
Q: Does it make it harder?
A: No, it’s just something that–something that I do and I love to do, and I’ve always–you know, I’ve been doing this for quite a while.
Q: Right.
When you began to engage in the practice of rephotographing the work of others did you consider yourself at the time to be a skilled photographer?
A: No.
…
Q. Mr. Prince, you’ve been handed what’s been marked as Plaintiff’s Exhibit 4.
Do you recall being interviewed in ArtForum Magazine in 2003?
A: Boy. I don’t really recall being interviewed, no.
Q: Do you know who Steve Lafreniere is?
A: No, I don’t.
Q: Let’s look at the second page of this exhibit. And there’s a question up at the top were the interviewer is asking, I’d always assumed that you purposely made your early photos have an amateur look and that you’d done them quickly, but looking at them today would suggest otherwise. How woked on were pictures like Untitled, three women looking in the same direction, 1980.
Before I read teh answer, did you have a work Untitled with three women looking in the same direction in 1980, if you recall?
A: Yes.
Q: And here’s what appears to be your answer. RP, I had limited technical skills regarding the camera. Actually, I had no skills. I played the camera. I used a cheap commercial lab to blow up the pictures. I made editions of two. I never went into a darkroom. And yes, I really worked hard on Women, capital W, period. I mean that piece still looks like it was purposely made.
Do you recall making that statement?
A: Yes.
Q: And was it a true statement?
A: Yes, it was. It’s absolutely true.
Q: The next question says, So you sort of fell into photography, and the answer is, In the early ’80s I didn’t have the subject matter for painting, I didn’t have the, quote, jokes, initial cap J, unquote, until 1986. What I did have was magazines. I was working at Time Life and was surrounded by magazines. I wanted to present the images I saw in these magazines as nautrally as when they first appeared. Making a photograph of them seemed the beset way to do it. I didn’t exactly quote, fall, unquote, as much as steal, period.
Did you make that statement?
A: Yes, I did.
Q: Was that a true statement?
A: Yes, it is.
Q: When you said you had no skills, I mean what did you mean?
A: I didn’t have any skills. I had never really–I liked the idea of not knowing how to use a mechanical apparatus at the time. I didn’t know anything about the medium.
Q: Right.
Do you remember saying in a subsequent interview that you destroyed photography?
A: Yes, I shot the sheriff or something like that. Yeah, I did.
Q: What did you mean by that?
A: I changed it. I revolutionized it.
Q: How?
A: I changed it completely.
Q: How?
A: Well, rephotography actually you could–thirty years later people download. You could actually substitute the word download for rephotography. I mean I did it.
Q: Download an image on your computer?
A: It’s the same thing really.
Q: And scan it–
A: I mean I’m talking poetically here, philosophically. Again, it’s all an experimentation. But I did destroy and change the whole–the whole medium actually.
And that’s what I was trying to do at the time was revolutionize an artistic practice that up to that time was pretty boring, really. [Prince transcript pp. 45-50, Selected Court Documents from Cariou v. Prince et al pp.18-19]
So maybe Eric’s photos are covers.