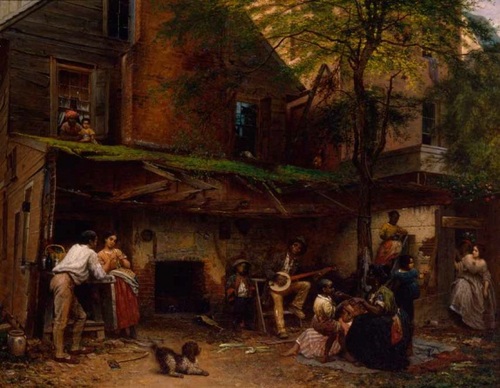 Eastman Johnson, Negro Life in the South, 1859, NYHS
Just getting in touch with my black roots, putting a stake in the ground here on part of Eleanor Jones Harvey’s discussion with Tyler Green about her show, “The Civil War and American Art,” which just opened at the Smithsonian American Art Museum.
About 43:00 into the show, Harvey talks about Eastman Johnson’s 1859 painting [above], Negro Life In The South. Which she argues is a critique of slavery via a complicated, carefully articulated exposure of the South’s precarious and untenable concept of race and power. It’s basically a beautiful mosaic of skin tones resulting from generations of interracial sexual relationships.
Harvey calls attention to the two women, one white-skinned, one darker, stepping tentatively through the door on the right, and the precarity of passing, the risk that if a master’s light-skinned daughter’s slave parentage were found out, then her life, her rights, her freedom, all that the front house represents, would be taken away.
“To my mind,” says Harvey, “what Eastman Johnson has done is, on the eve of civil war, painted a referendum on skin color as an arbiter of your legal status: At what point on a sliding scale, from white to black, do you segue from being a person to being property?”
It’s this clash of a binary and a spectrum that caught me short and made the challenges of multi-racial ancestry in American history much more crucial and much less abstract or academic. It’s the kind of thing that even if by 1859 they were well within the color scale of the main house, my descended-from-a-17th-century-free-African-Virginian Mozingo ancestors would have spent over 250 years internalizing.
MAN Podcast Ep. 54: American Art & The Civil War [manpodcast.com]
Previously: It’s A Mozingo Thing