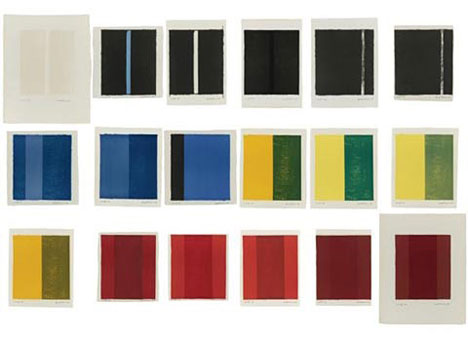 I must explain that I had no plan to make a portfolio of “prints.” I am not a printmaker. Nor did I intend to make a “set” by introducing superficial variety. These cantos arose from a compelling necessity–the result of grappling with the instrument.
To me that is what lithography is. It is an instrument. It is not a “medium”; it is not a poor man’s substitute for painting or for drawing. Nor do I consider it to be a kind of translation of something from one medium to another. For me, it is an instrument that one plays. It is like a piano or an orchestra; and as with an instrument, it interprets. And as in all the interpretive arts, so in lithography, creation is joined with the “playing”–in this case not of bow and string but of stone and press. The definition of lithograph is that it is writing on stone. But unlike Gertrude Stein’s rose, the stone is not a stone. The stone is a piece of paper.
I have been captivated by the things that happen in playing this litho instrument, the choices that develop when changing a color of the paper size. I have “played” hoping to evoke every possible instrumental lick. The prints really started as three, grew to seven, then eleven, then fourteen, and finished as eighteen. Here are the cantos, eighteen of them, each one different in form, mood, color, beat, scale, and key. There are no cadenzas. Each is separate. Each can stand by itself. But its fullest meaning, ti seems to me, is when it is seen together with the others.

I joked about 18 Cantos this morning; it’s one of my absolute favorite print works ever. [And no, I don’t have a copy, so no, I will not be breaking it up and giving it away to random Twitter followers.]
But it just occurred to me that Newman’s perception of the lithograph stone as an instrument to be played, not a medium to be translated, is very similar to Richard Prince’s early approach to photography.
Here’s just one example from Prince’s Canal Zone deposition, when questioned about a 2003 Artforum Q&A where he said he “played the camera”:

I was extremely–to tell you the truth, I was extremely conservative, on the other hand, in terms of my artistic attitude.
And I knew that in order to maybe discover something new I had to change a bit and take on another persona. And I felt that by playing, quote, as I said in the interview, the camera, just like a punk rock guitarist who picks up a guitar, seven days later he’s playing on stage. He doesn’t know how to play the guitar, but it’s his inability which shines through, which is really exciting. And the fact that he’s not a virtuoso–it’s the very limitations I think that make–can actually make great art.

Newman’s statement is published as “Preface to 18 Cantos” in Barnett Newman: Selected Writings and Interviews [amazon]
Arcy Douglass’s 2008 post about 18 Cantos, then on exhibit at the Portland Art Museum [portlandart.net]