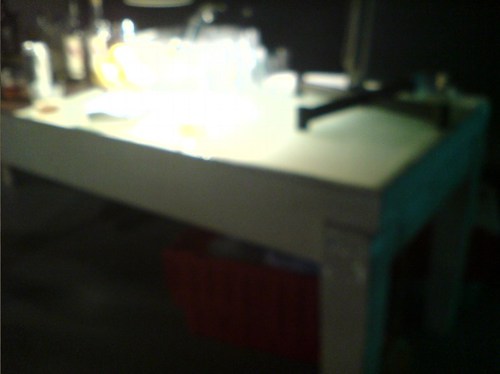 So this is John Cage’s table.
Nothing fuels one’s quixotic pursuit of Cage’s visual and aesthetic artifacts quite like being served a drink from what turns out to be John Cage’s table.
I cannot say where or when I saw it. I cannot say who has it. I can only say I was told that it was Cage’s table–really, John’s and Merce’s table–from their loft on 18th St, and that it came with instructions [conditions?] not to fetishize it. I believe that was the word used. Maybe it was valorize. Not to valorize it. At which point I joked that I did not fetishize it or whatever, I only coveted it. And I promised that, if asked, I would attest that it was not fetishized, and that if it was given to me, I would not fetishize it, either.
Upon reflection, it felt like a useful insight into Cage’s perception of objects, the things around him which he knew, if he wanted or allowed them to, could garner attention or importance by virtue of being his. It’s Buddhism 101, eschewing attachment to objects, but it’s also an artistic position. No branding. At the very least, art was not a practice for generating objects, either for sale or veneration. Oh, maybe that’s what it was not supposed be: venerated. 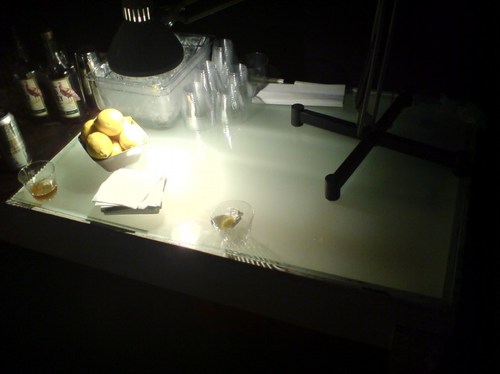 Yes, that’s it. Veneration. Like saints and gurus. I could see why Cage would be sensitive to that. No problem. Since it was being used as a sloppy drinks table, I was going to happily attest that it was not being venerated in the slightest. No venerating here, nosiree.
But let’s just take a look at it instead, hmm? Because it does have some aspects which we might consider Cageian. It’s rough, simple, not fancy, not precious, not worked, just made. It’s painted white, like the original Mazza loft. It’s utilitarian, or functional. Multi-functional. IT HAS A LIGHT BOX BUILT RIGHT INTO THE END, PEOPLE. So it was for working, meeting, and eating. 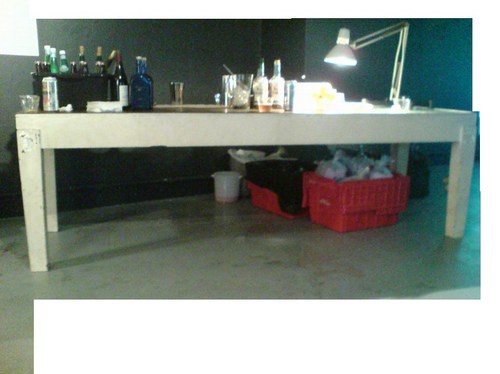 And it was made, not bought, found, or adapted. With some trace of intention. No chance operation produced the slight taper in those square wooden legs. And there’s the nice little setback edge between the upper and lower halves.
Since the table was not immediately offered to me, and given its principled/conceptual encumbrances, the obvious thing was to make one myself. Which is why these photos exist, as documentation for this project, my second table. Table-shaped object. By-product of my performance of a score for a table. I really just want the table, mkay? I’m imperfect and unenlightened, and the Dalai Lama has his watch, I just want the table. 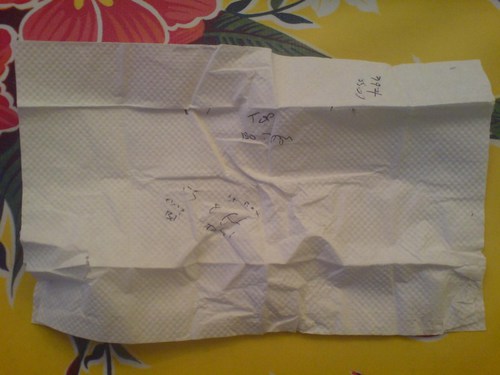 So as best I could, I took some measurements. I just found the napkin I used to scribble down some ad hoc data. What a dork I was right then and there. I hope I was at least amusing.
“Cage table”
those are the widths of the top and bottom of the legs, looks like about a 4/3, 1″ taper.
“55 [?] chip Bd?
lt Box 8 ft Total”
That can’t be right. Well, it’s close. If the napkin’s 10″, the light box looks to be around 3′, at least. [That was my unit of measure: napkinlengths.] I guess I figured I’d be able to feasibly extrapolate the other dimensions? Was that what I was thinking? 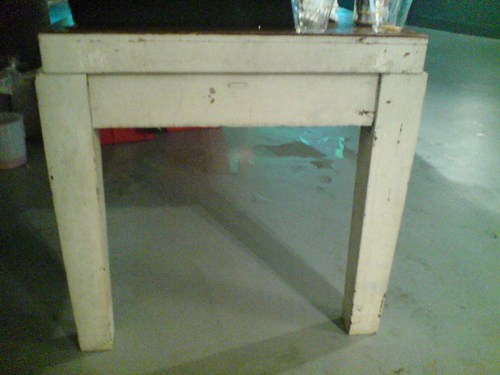 Hmm, maybe this was found, and hacked. Given a new top and a paint job. An old lab table or something. Because seriously, those legs are non-trivial. But then, those legs also look hammered. I won’t fetishize or historicize the construction. Any deskilling will be my own.
Meanwhile, seriously, current non-venerator[s] of this table, if it’s ever in the way, or under threat, or if you redecorate, or whatever, any reason, let me know, and I’ll gladly clear it out in the least venerating way possible.