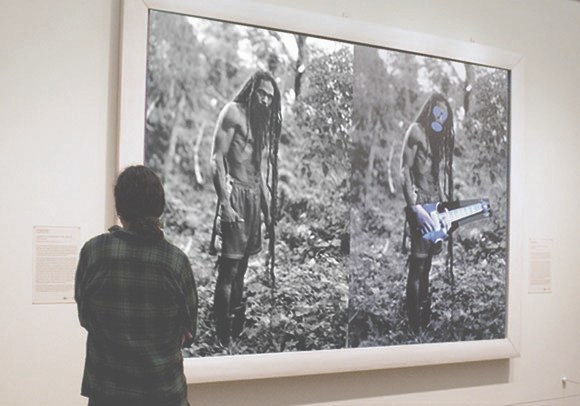 “Courtesy Flickr and the Artists; Illustration by BLOUIN ARTINFO”
The new issue of Aperture has a great discussion between Penelope Umbrico and Virginia Rutledge about one of my favorite WTF aspects of the Cariou v. Prince case: the fact that the primary visual evidence of copyright infringement used in court is not the paintings themselves, but photocopies. When the fair use/recontextualization/mediated imagery chips are down, the only thing being looked at is flattening, scale-destroying Xerox pairings made by a friend of Patrick Cariou.
Anyway, hot foot it over there right now, but before you go, just check out this amazingly dishonest image of a page from a book and a 6-ft painting. It’s “Courtesy Flickr and the Artists; Illustration by BLOUIN ARTINFO,” and accompanied a Julia Halperin story from last year wherein “BLOUIN ARTINFO analyzes how the Prince v. Cariou case has shaped views on the issue of appropriation.” Which, SRSLY, BLOUIN ARTNFO, analyze thyself.
It’s almost enough to make me start turning my pages from my copies of Cariou’s Yes Rasta book into tiny, exact collage replicas of Prince’s paintings. Stay tuned.
The Image World Is Flat: Penelope Umbrico in conversation with Virginia Rutledge [aperture.org]