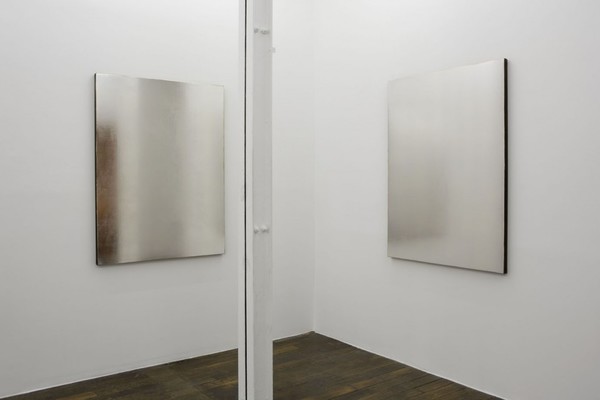 OK, I am a bit in love with Jacob Kassay right now, in my head.
In Art F City Eva Heisler reviews Kassay’s current show at Art:Concept in Paris [above], his second, and it looks remarkably like the first, in 2010 [below]. 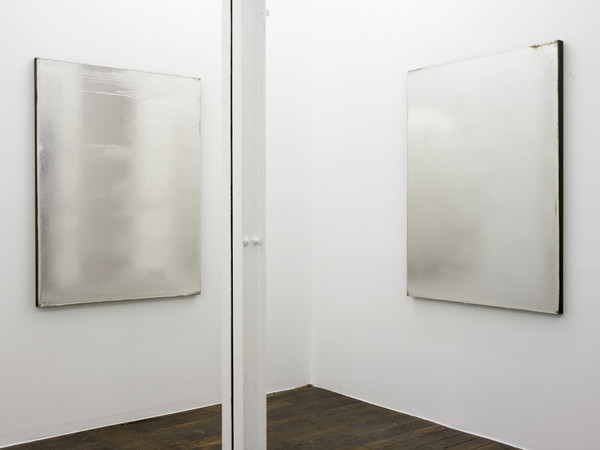 Do you see what he did there? Did he really just answer the perennial art journo question about how he’ll top with the extraordinary popularity of his electroplate paintings by just cold restaging an entire show of them? Apparently, no.
Heisler explains that these are not Kassay paintings, but “canvases,” “props in lieu of paintings.” In fact, they’re in exactly the same lieux and same dimensions as Kassay’s first show. And the installation shots of 2013 are almost all identical to those of 2010. And despite what it looks like, this situation Kassay has set up is one in which, as Heisler astutely puts it, “his paintings are present only through their staged absence.”
But these present absences, these “not paintings,” are–are you sitting down?–not for sale. They will be destroyed after the show. At least the canvases will be. The “stretcher bars (will be) recycled.” Which seems like an odd detail, but hey. 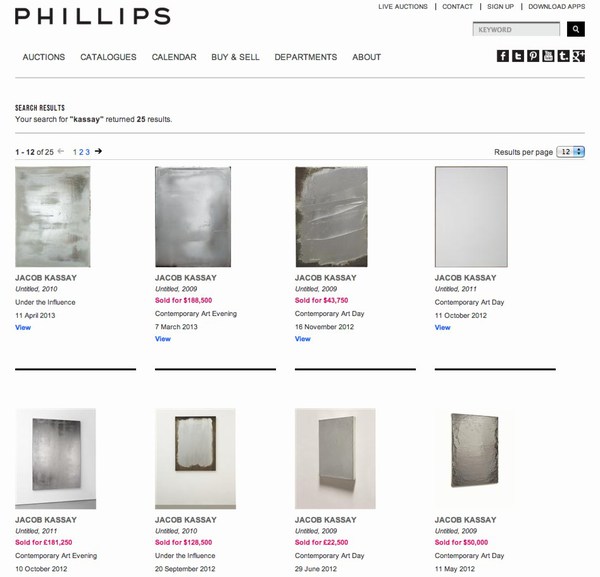 There were actually not 25 paintings at Phillips, only 17, with one sold twice. Which, holy smokes, nice placement. Does anyone hold onto these, ever?
And not only do these new canvases have a uniform, non-gestural, more mirror-like facture, Heisler reports, again, kind of oddly, that “this time the artist did not touch the surfaces at all.” Which would seem like the least determinative factor possible for a non-painting these days, until this one:

The fact that Kassay’s mirror objects are emphatically “not paintings” and earmarked for destruction implies that the definition of what counts as a “Kassay painting” has to do with its entry into the art market. If so, then it is an irony that the artist’s attempt to evade the market in fact reaffirms its powers even to name what counts as “a painting by Jacob Kassay.”

Which, what? Why? No way, not even. Kassay can outsource or not sell or destroy what he wants. But the only reason Kassay’s “not paintings” are not paintings is because Kassay says they’re not paintings.
What Heisler calls “deflection” I would see as negation. Looking back, and following the artist’s chosen mediations, the Art:Concept show reflects [sic] a sustained strategy of negation and “staged absence” as a constructive part of Kassay’s practice. 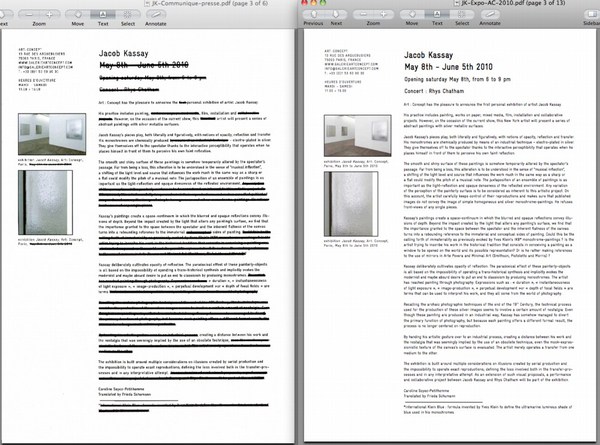 Art:Concept’s press release for the current show is, so to speak, Exhibit A. Just as the 2013 canvases bear striking resemblance to the 2010 paintings, The new press release, too, [left, pdf] turns out to be an excised, barely augmented, near-replica of the old [right, pdf] And you know what the funniest thing about Kassay in Europe is, it’s the little differences.

To make it easier to see what’s changed, or specifically, what’s been deleted, negated, from Kassay’s presentation, I converted his strikethroughs to highlights. You can download the complete, highlighted pdf here. What’s erased crossed out? Well, data [Dates, “New York,” “collaboration,” and “works on paper,”] but also things like “industrial,” “chemical,” “conceptual,” and every reference to photography and his monochrome and mirror forebears such as Yves Klein and Robert Smithson. Also blacked out: any privileging of “the perception of the painterly surface,” and particulars of how “the artist carefully keeps control of their reproductions.” Which, he may not want to talk about it, but since the 2013 installation shots match perfectly to the 2010 photos, I think it’s safe to say he still cares.
It’s a stretch, perhaps, but there seems to be a non-trivial overlap between what was blacked out and the terms, references and concepts initially used to hype Kassay’s paintings in auction catalogues and the media. [“Whilst Kassay uses industrial techniques, they retain an engaging, painterly quality.”]
What’s less speculative but feels quite instructive is to see what stays:

“the modernist and maybe absurd desire to put an end to classicism by producing monochromes.”
“…creating a distance between his work and the nostalgia that was seemingly implied by the use of an obsolete technique.”
“…multiple considerations on illusions created by serial production and the impossibility to operate exact reproductions; defining the loss involved both in the transfer-processes and in any interpretive attempt.”

The Art:Concept show also invites a reconsideration of Kassay’s just-ended exhibition in New York, Untitled (disambiguation) [or as I liked to call it, “leftovers at The Kitchen”], which consisted, remember, of stretched scraps of canvas from which his earlier paintings had been cut. The staged absence of paintings. 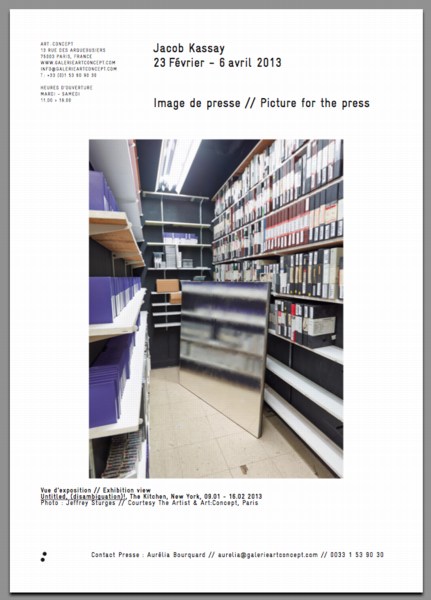 It also included several silvered paintings, installed/photographed in conspicuously offhand, even marginalized spaces: propped in the foyer, behind a column, or in a storeroom. These images are, in fact, included in Art:Concept’s press release. 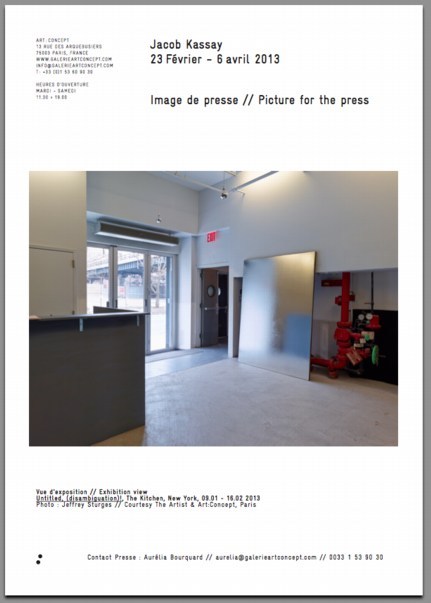 And now that you mention it, their surface looks as uniform and non-painterly as the “not paintings” of Paris. Did anyone look into The Kitchen’s mirrors, to see what their status was? Were they, too, “props in lieu of paintings”? Were they dismantled or destroyed? Were they for sale? Is there any place better than the gallery of a performance space to stage absence?
I looked back at reviews and such, and found that, again, the press release had been altered, this time without leaving a trace. The early text preserved–along with Ben Davis’s mug–in this photo contains facts about the making of which are omitted from the archived version. [pdf] What had been explained and presented as the artist’s intent was eliminated, transformed through negation into historical hearsay.
Which makes me think again of the Henry Codax Incident last year. That’s when Christie’s, citing Gallerist NY’s report, described a dark grey monochrome by the fictional artist Codax as the product of a collaboration between Kassay and Olivier Mosset. Kassay protested, and insisted that Christie’s read a statement before the auction “disassociating his name” from the painting.
So in addition to Codax paintings which are “not Kassay paintings,” we can add canvases in a Kassay show which are “not paintings.” To paraphrase John Cage, Kassay has nothing to paint, and he’s not painting it.
But just as Rauschenberg demonstrated erasure as a generative act, Kassay gives hints that negation for him is constructive and not repudiation or “deflection.” Art:Concept’s current Kassay slideshow also includes two non-not-painting objects: used French library books with prismatic acrylic wedges inserted into them. One is a collection of work by the late Greek poet Constantin Cavafy. 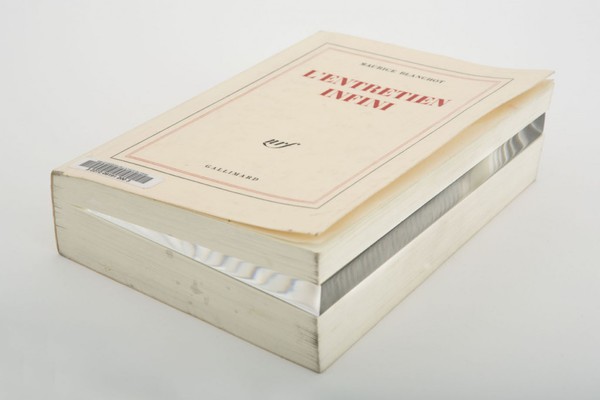 The other: l’Entretien Infini, The Infinite Conversation, by philosopher/theorist Maurice Blanchot. Blanchot and Mallarmé argued that the power of language derived from its ability to negate a thing and replace it with an idea. And that both thing, the disappeared/negated thing and the idea that replaced it were equally valid, constant, and stable. And that the idea was even moreso, because the thing was subject to change. So really, instead of looking at the not paintings as destined for destruction; we should see them as ideas which will never be tarnished by time, atmosphere, or white-gloved flippers.
Jacob Kassay at Art : Concept, Reflection or Deflection? [artfcity]
Jacob Kassay, 23 février – 6 avril 2013 [galerieartconcept.com]
Jacob Kassay, 8 mai – 5 juin 2010 [galerieartconcept.com]
Previously: Henry Codax at Auction; also, Speculation
Also, Jacob Kassay, Johns & Rauschenberg, and collaboration