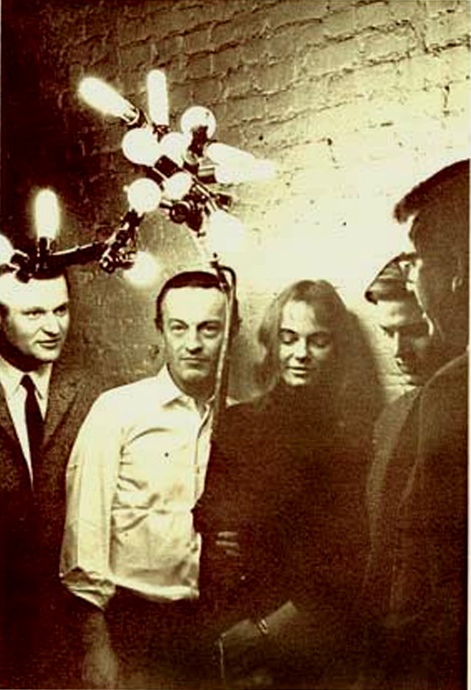 So I’ve decided to make me a lamp like this Larry Rivers lamp Frank O’Hara had in his loft in the mid-60s.
Which means I’ve been trying to map out the number and types of sockets and adapters up there. And I’ve begun poking around for parts. At first, I was going to rework a vintage, industrial-style floor lamp, but those aren’t turning up with anything like the frequency I need. And the current crop of adaptable floor lamps are actually pretty unappealing, too. Really, they just make no sense here.
So to stay closer to Rivers’ approach, I think I’ll just build up a lamp from galvanized steel pipe. [I saw Colin Powell puttering around the hardware store yesterday, btw, the hardware store that had no such plumbing parts at all, just PVC, which, no thanks.]
Rather than a fuse-blowing heater made with 14 incandescent bulbs, I figure I’ll make a little constellation of incandescents, CFCs, and LEDs, in a range of whites. And as for the wiring and cord, well. I am really jonesing over this: 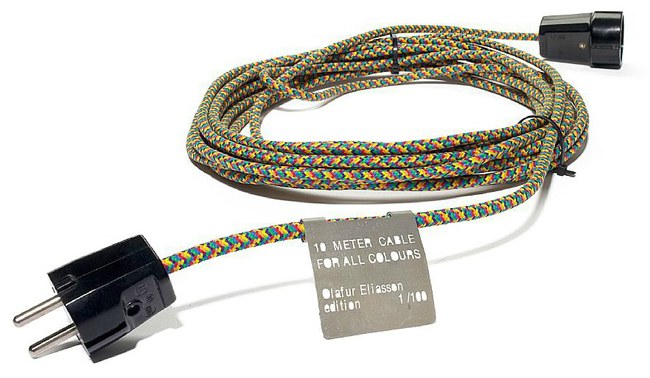 It’s an extension cable, from Olafur Eliasson Studio, released in 2004 as a limited edition with the title, 10 Meter Cable For All Colours. Which, I know, is just nuts. But still. There have been more than a few works like this from Olafur, where very modest functional objects are produced for internal use, which are recouped or spun off as an edition. It is a model that works for him, and the demand is there, so.
Technically, though, for this project, it’s not what I need. And I wouldn’t cut up an Olafur cable to rework it into my thing anyway. I just mention it here because the world is an amazing place.
Previously: Frank O’Hara’s and Alfred Leslie’s Larry Rivers’ Lamp
Previously and amazing and related: Lindsey Adelman’s autoprogettazione-style, You Make It chandelier