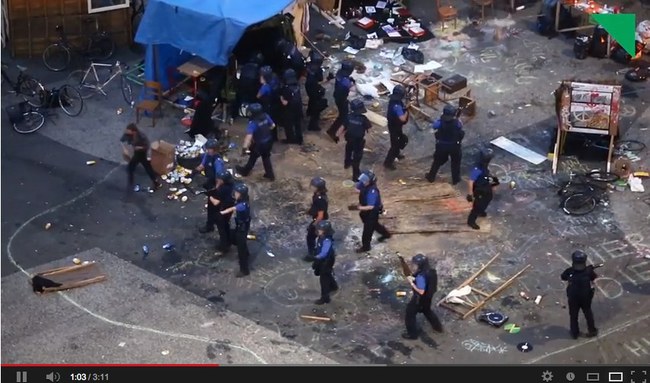 How is Tadashi Kawamata’s Art Basel Favela like a real favela? It’s built on public land, gets inhabited by people who don’t have legal permission to be there, who are tolerated or ignored for a while, and who then get attacked and dispersed by riot police when someone with power decides it’s time for them to go.
The details are still not clear to me, but Tages Woche reports that on Friday night, Basel police raided an outlaw party that had occupied Kawamata’s Favela cafe, firing tear gas and rubber bullets into the small crowd. 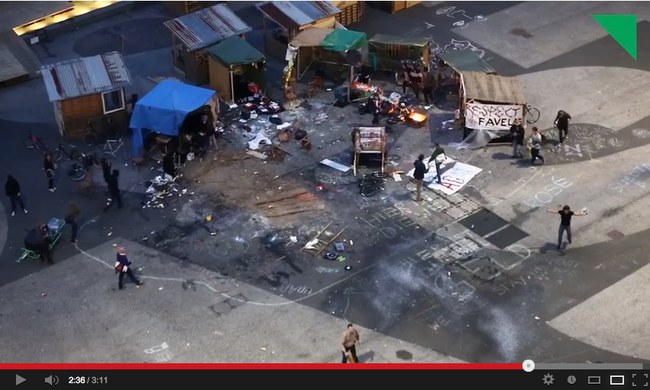 It appears that an event organizer had erected a favela DJ booth of their own, and were presumably protesting Kawamata’s use of favelas to serve luxury falafel [at “reassuringly exclusive prices”] to visitors at Art Basel last week.
The event, or happening, or protest, seems to have been low-key. According to Tages Woche, Kawamata’s collaborating architect Christophe Scheidegger met with the protestors, and they were allowed to stay for a while. Police and Art Basel officials decided to clear them out at 10pm, declaring the noise levels illegal, and that continued occupation of the favela–in the public platz, which had been rented by Art Basel–would be considered trespassing. 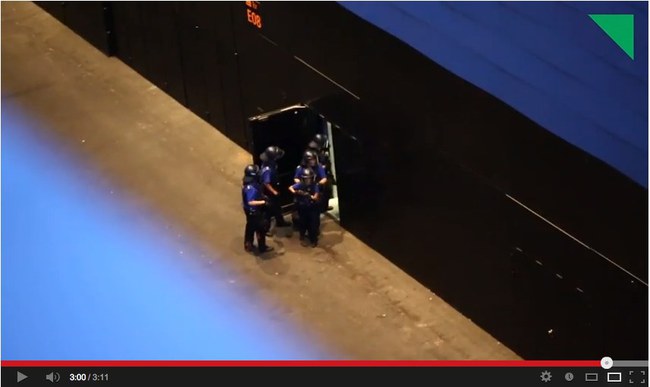 And that’s when, holy shit, it looks like they sent an assault force straight to the DJ favela to end the music and scatter the crowds with pepper spray and rubber bullets. Police established a perimeter, ended the party, kicked a few people on the ground, and then retreated back into the new Herzog & deMeuron Messe [above].

Tages Woche has a video of the attack shot from the parking garage [The embed above is from LiveLeak, but it’s on Vimeo, which won’t embed, and on YouTube, which, honestly, someone put an age-related content warning on? Is this an anti-viral video tactic?], though it’s edited in a way that does not make it so clear what exactly preceded, and may have precipitated, the use of violent crowd control tactics. [The editors and reporters wrote a followup post addressing the circumstances of shooting the video.]

But this unedited YouTube video posted by Gab Kae tracks around the entire platz, and captures the police raid from within Kawamata’s own favela. [It comes at around 2:20.] If there’s anything at all that justifies such an attack, I can’t see it. For these people hanging out in front of Art Basel, abuse of power came as a baffling surprise.
UPDATE greg.org reader Arthur points to another Tages Woche video, uploaded yesterday, which was taken on the ground, right next to the police, and which shows preparations for their assault on the party/protest.
In addition to the donkey, which had been part of the initial protest, the video features this nice, white-haired lady drinking a tallboy who, upon consultation with the officers, decides it best to move her chair out of the way.

After literally receiving their marching orders the Basel police head straight for their target. Which, this video makes clear, is the thumping sound system. Just watch that amp skittering out across the platz at 1:40. Obviously, the music demanded a forceful response, and any human casualties, injuries, or abuses, must be considered collateral damage and entirely unintentional. You know how it can be when techno dirtbags crash your party and won’t leave.
Video: Gewaltsame Polizeiräumung am Messeplatz [tageswoche.ch]
Basel Favela Occupation [artreview]