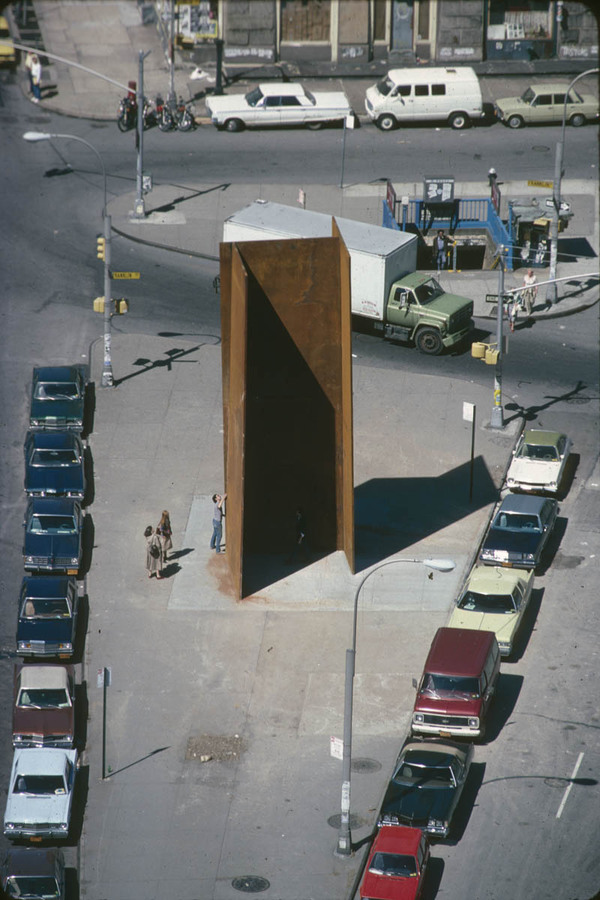 T.W.U., 1980-81, photo by Donna Svennevik, via publicartfund.org
Richard Serra was on a roll in NYC in 1980. In the run-up to the debut of Tilted Arc, he had two Cor-Ten sculptures installed in Tribeca: St John’s Rotary Arc was in the exit plaza of the Holland Tunnel, and T.W.U. (above) was in front of the Franklin St. entrance for the IND subway. It was named for the Transport Workers Union, which had just gone on an 11-day strike as the sculpture was being installed. 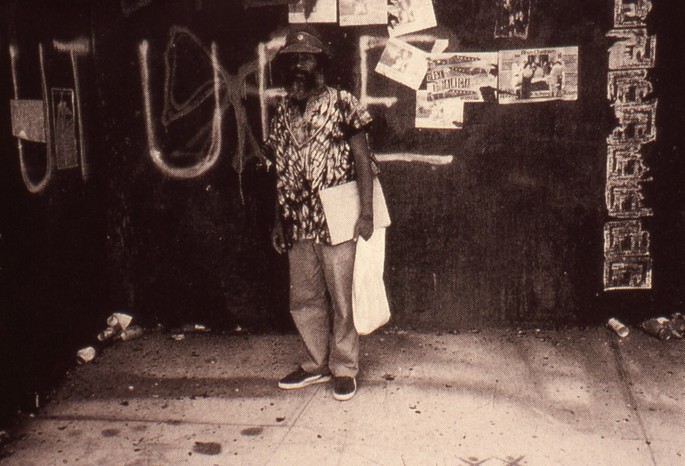 By 1981, T.W.U. was looking a little beat, strewn with empties, and covered with wheatpasted flyers and graffiti. That’s when Dawoud Bey shot a series of photos, posted recently on Black Contemporary Art’s tumblr, of David Hammons pissing on the sculpture.
The sequence apparently begins with Hammons in khakis, Pumas, and a dashiki, with a matching shoulder bag, just standing there in the south-facing space of Serra’s sculpture. In the next photo, he’s turned away from the camera, doing his business. 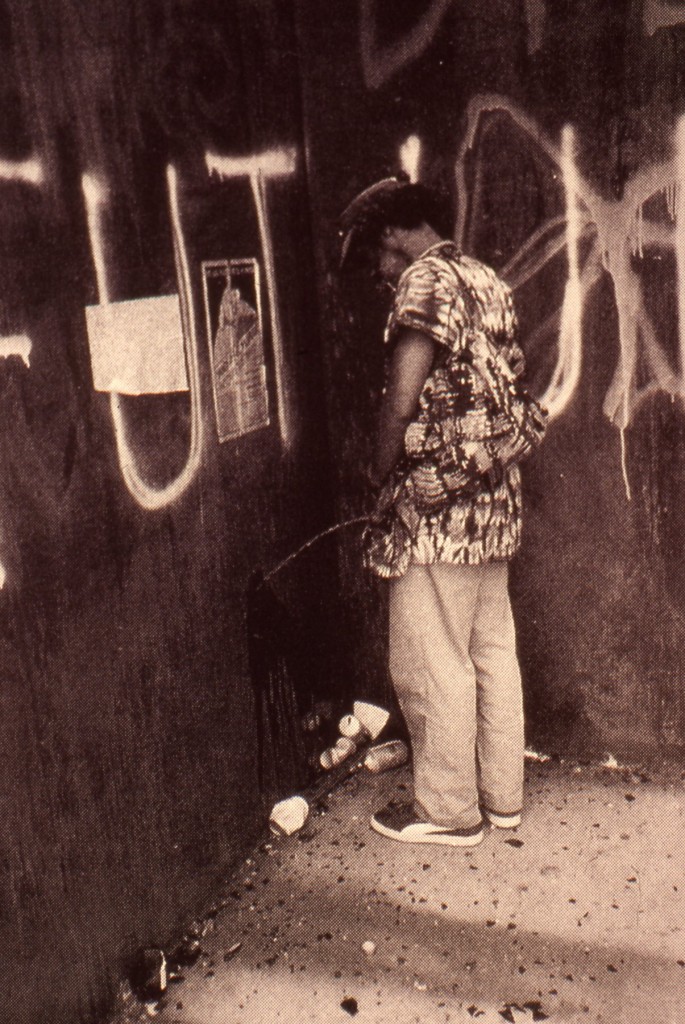 Then we see Hammons, talking with an NYPD officer, presenting papers, maybe a passport? The caption reads, “David Hammons receiving a citation from a police officer.” Which might have happened! But really, we don’t know. 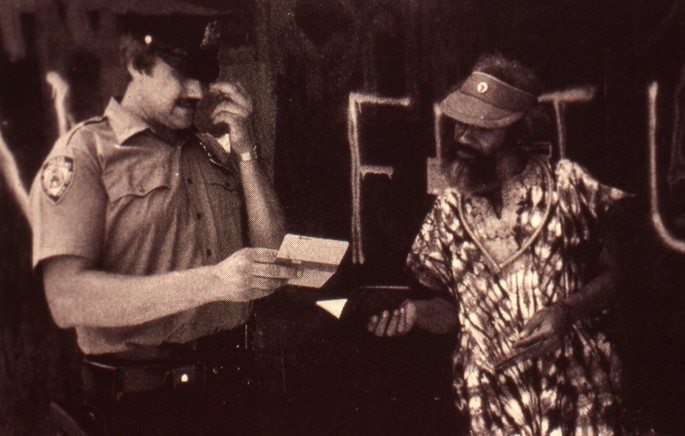 These photos are not journalism; they’re documentation of a performance Hammons titled Pissed Off. I don’t know when or how the title emerged; it’s hard to trace the historic trajectory of Hammons’ practice apart from the art world’s later embrace/interpretation of it.
But considering that other tellings of the story say that Hammons was “arrested” or “almost arrested,” I feel more comfortable in just saying we don’t know.
What happened, and what’s in the photos, are not the same thing. There were actions and interactions here beyond the frames and before, after, and in between the clicks of the shutter. Like, where’d the white shopping bag and folder Hammons is holding in the first photo go? Is Bey holding them? It makes me think of one of the best pieces I’ve ever read on Hammons’ work, by Christian Haye and Coco Fusco, from Frieze, May 1995:

[Hammons] is, in actuality, a masterful investigator of how an oppositional black cultural identity can be generated through a dialogue with ‘high’ culture, particularly as it is articulated through standard English. His method relies on punning and other kinds of word games that short-circuit the dominant cultural interpretation of any given object or term to be redirected for his own purpose.

This practice, which Haye discusses using Henry Louis Gates’ concept of signifyin’, applies as much to Bey’s photos as to Serra’s sculpture. The art world can think it’s funny and transgressive to see Hammons pissing on Serra, but do they even notice that he’s splashing onto their shoes, too? That everyone assumes or accepts the retributive outcome of Hammons’ encounter with the cop may just be the most critically damning aspect of Pissed Off. 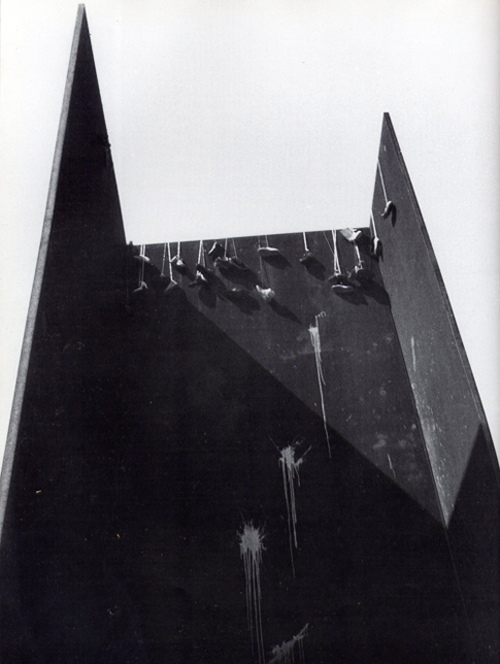 David Hammons, Shoe Tree, 1981, on Richard Serra’s T.W.U., 1980, image via grupa ok, (who rightly call it an assemblage)
Speaking of shoes, Hammons did another performance at T.W.U.. For Shoe Tree (1981), Hammons threw 25 pairs of sneakers over the top of Serra’s 36-foot tall steel plates. Some call it a performance, but unlike his documentation for Pissed Off, Bey’s photo shows no artist, no action, no street, no building, even, just the stark angles of the top of Serra’s paint-splattered sculpture against an empty afternoon sky.