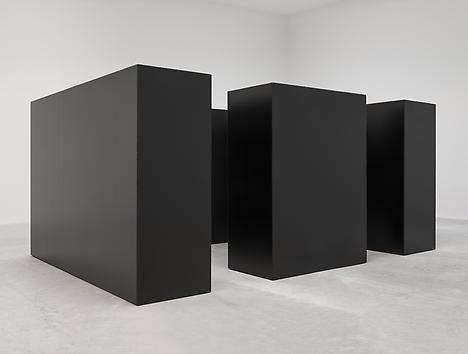 Tony Smith conceived of The Maze in 1967 for a very early show of installation art at Finch College’s townhouse gallery on the Upper East Side. The four units, two 10×7′ and two 5×7, were originally made from plywood, painted black. Grace Gleuck said the light was low, and that “a walk among these gloomy, primeval presences evokes the feeling of an endless forest.”
When I wrote about the little cardboard model of Maze in Aspen 5+6, in 2012, I did not know whether it had been shown since. That was because I just wasn’t looking hard enough. It turns out that another plywood incarnation of The Maze was shown at Paula Cooper Gallery in 1988. And last Fall, Matthew Marks installed a black steel version of Maze [no The] in his Los Angeles gallery. I’m bummed I didn’t get to visit it in person, but the photos look stunning [top].

The plan of the piece seems to show that the dimensions, including the inner and outer passages, and even the units themselves, were all 30 inches wide, and derived in some degree by the Finch space itself. Not sure about Paula’s incarnation, but that site-specific aspect didn’t make it into the 2013 version, which looks suitably monumental, but also clearly sculptural. And not a hint of primeval gloom.
In his statement for Aspen, curated by Brian O’Doherty, Smith actually gave permission to anyone to “reproduce the work in its original dimensions (in metal or wood).” And so I will. As The Maze Collection of functional household built-ins. It just seems like a lot of space to lose to sculpture. It’s more Zittel than Zittel, and less Jade Jagger than Jade Jagger. 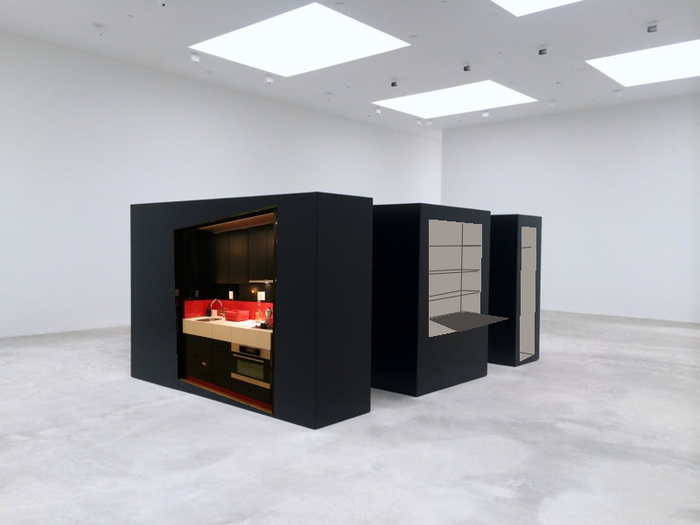 I see The Maze Collection as having a really sick, velvety, matte black surface. No gloss, no lacquer. As long as you make that the panels close properly, and give you that clean, solid, not-at-all-hinged-or-doored look, I think it’ll work.