The late 1990s. The end, the beginning, a bit in-between. The Internet was around, but so much of life and culture still existed in analog. Scanners, digital cameras, these were still too exotic or unusable for most situations in 1997-8. I had a Canon Elph, a 35mm camera whose big innovation was that it was small enough to fit in your pocket.
The art world was climbing out of a several years of recession; globalism was on the march, but it still felt very local. Interesting and important, but laid back and niche. I remember the moment very vividly where I was sitting in a Christie’s auction room on Park Avenue, trying to bid on a Felix Gonzalez-Torres puzzle, when some guy I didn’t recognize totally blew past me, buying what had been a $2,500 piece for $18,000. It turned out to be Eugenio Lopez.
SoHo in 1998 was in between, too. Right in between After Hours and an overbranded luxury mall. Bronywn Keenan was a dealer then, with a great, raw, corner floorthrough on the 2nd floor of the building on Crosby and Howard. She had an eye, and an amazing program.
On one weekend night, I’ll say it was early summer, there was an event. Now we’d obviously call it a performance; then, it wasn’t billed as such. We were all just told not to miss it: Reverend Hank would be Blessing The Meats Of Summer. 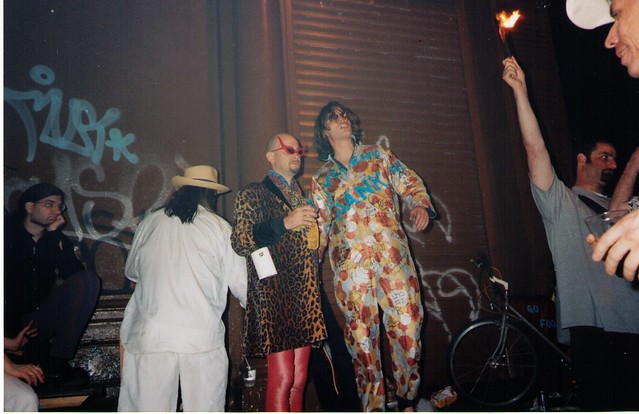 I’m no Shunk or Kender, but I took my Elph to this event, and shot three rolls of film. I found the photos in their Fromex envelopes [“Were in the NYNEX Yellow Pages”] a couple of years ago, and then I lost them again, and then I found them again. And I finally scanned them, and here they are.
I will now present an abridged account of Reverend Hank Blessing The Meats Of Summer, which consisted of some music, some preaching, some inexplicable performance, some grilling, and some BMX stunt biking, in roughly that order. If you recognize anyone, or recall any details, or know what was going on, or what Rev. Hank or anyone else is up to, let me know. Art History needs to know. 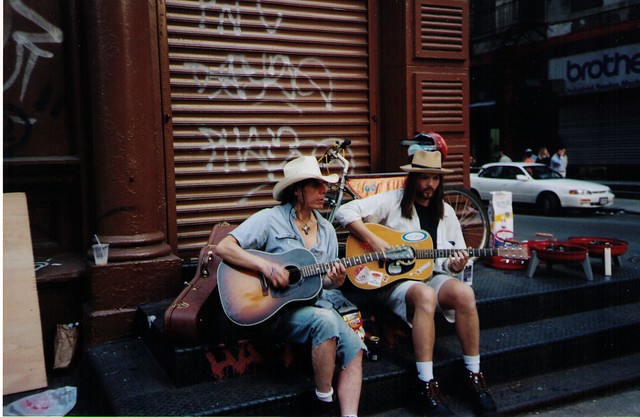 Brad Kahlhamer and friend played guitar on the steps of 2 Crosby Street next to the grills. 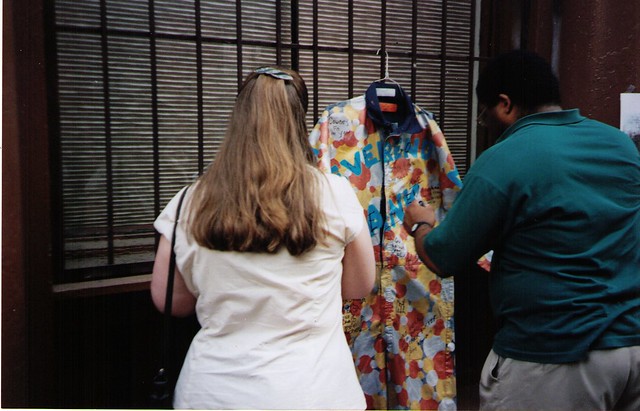 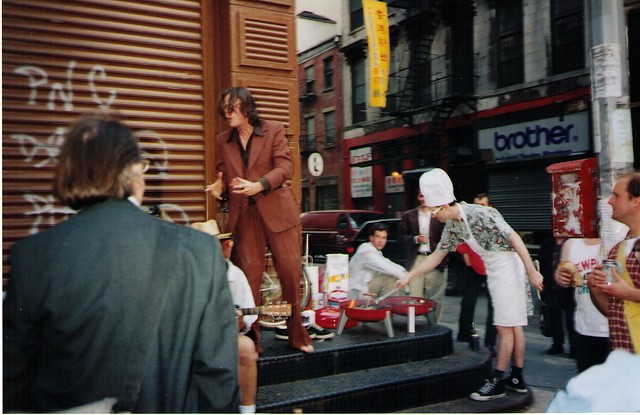 Reverend Hank himself preached to us as the chef attended to our meal. Some people observed the city’s brown bag law, some did not. The New York Times’ Colin Moynihan [seated, in seersucker] just observed. 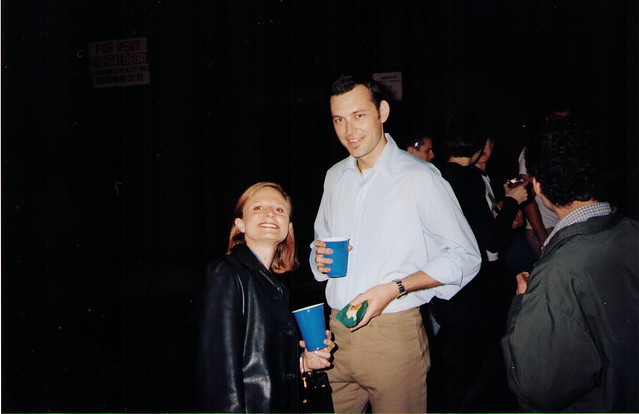 Liz and her husband Dylan [?]. Liz worked in the gallery sometimes, was studying art history, I believe. Dylan was an adman. 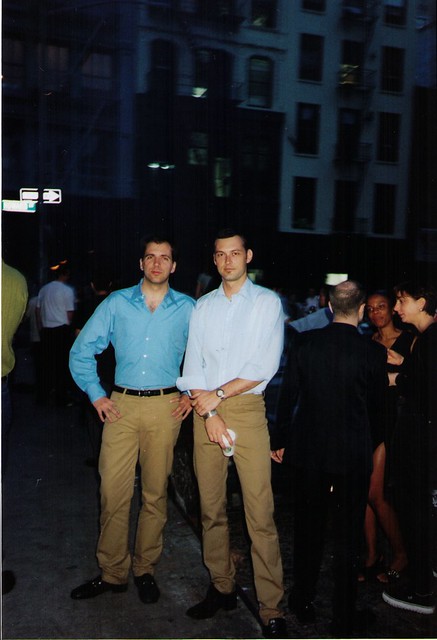 Matchy. I think I still have that shirt. New Republic, on Spring, RIP. 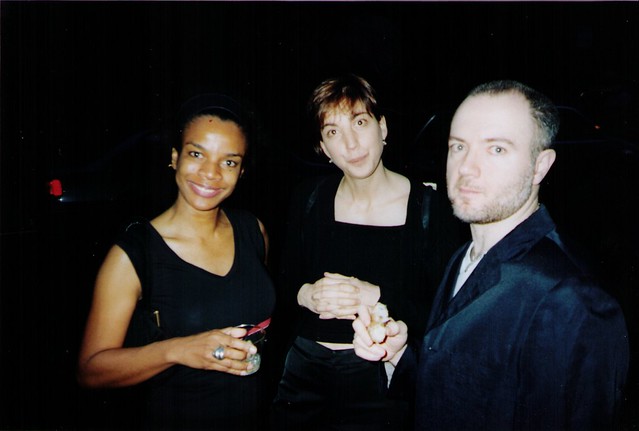 Rae [left] was a friend of Bronwyn’s. Other folks TK 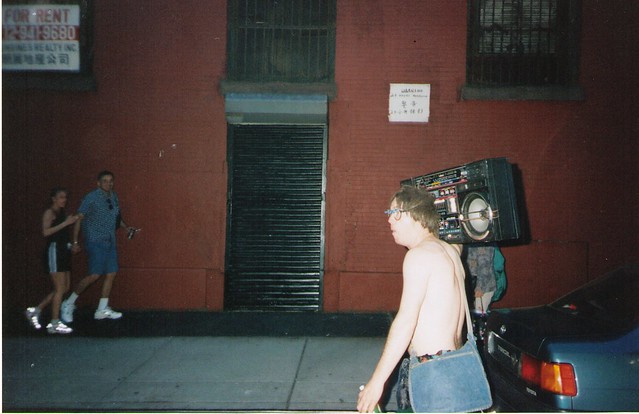 This guy was making the scene with his boombox. From the Reverend’s entourage. 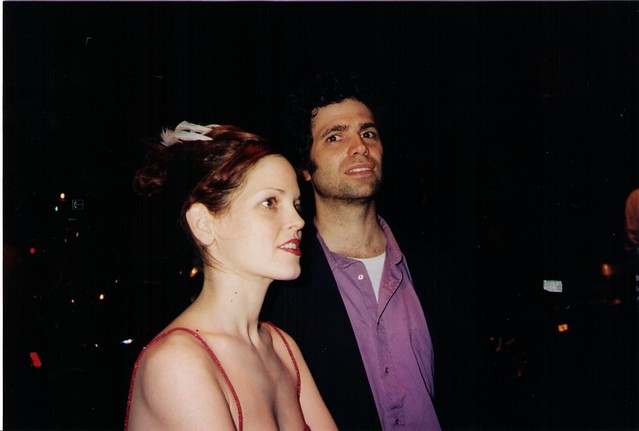 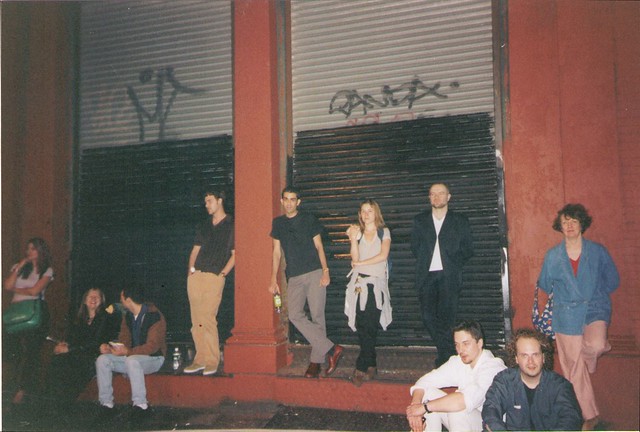 Enoc Perez, with bottle, in the congregation. 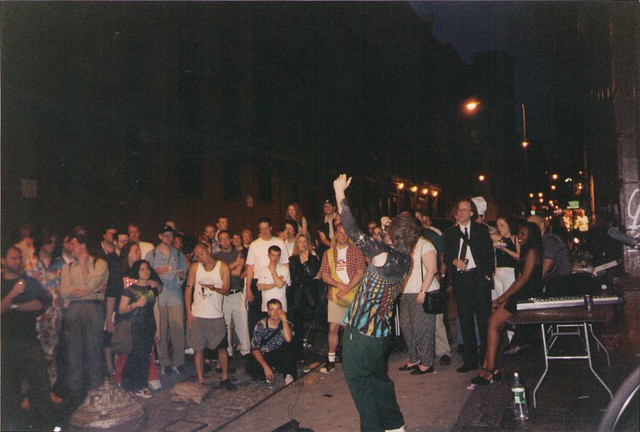 Boombox Guy put his disco shirt on for his performance. [Here’s another shot; recognize anyone?] 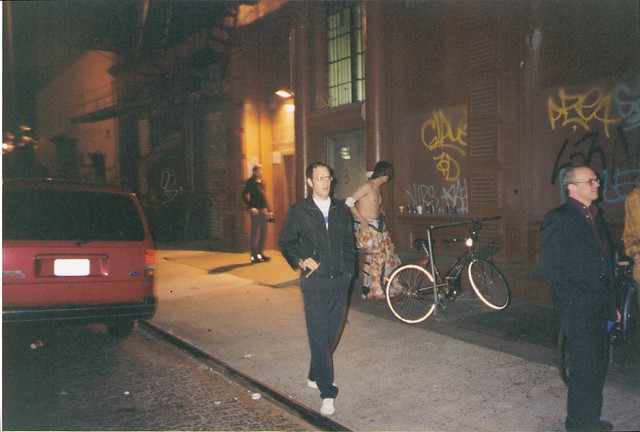 Jeremy Blake rolling up while Reverend Hank changes into his jumpsuit on the sidewalk. Here’s Jeremy and Darcey Steinke. She was doing a book with Rick Moody at the time, essays on the New Testament. As a fairly religious guy myself, I can’t say I actually connected any dots with these preacherly goings-on. Bronwyn showed a guy named Rev. Ethan Acres a couple of times, too, but it all felt like religion as form or mode. The wary Gen X’er in me is trying to write around the word ironic here.

A call to the altar. I’m certain that guy was being ironic. 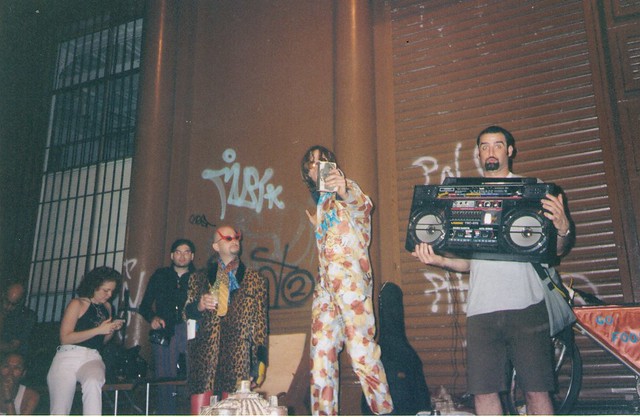 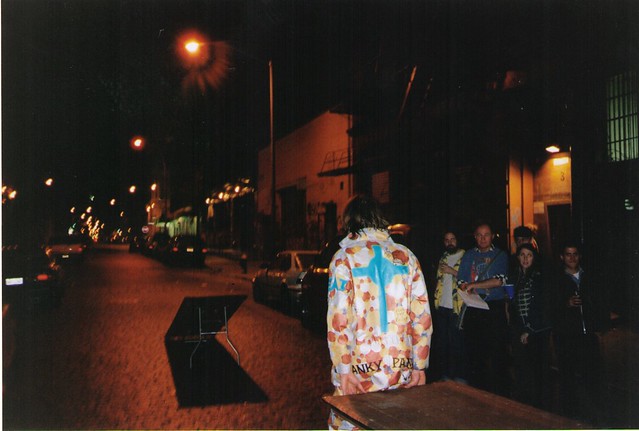 Then the reason we’d all been gathered here today. Reverend Hank sets up his ramps, a couple of those shitty Canal Street vendor tables, on Crosby. There was never any traffic on Crosby. 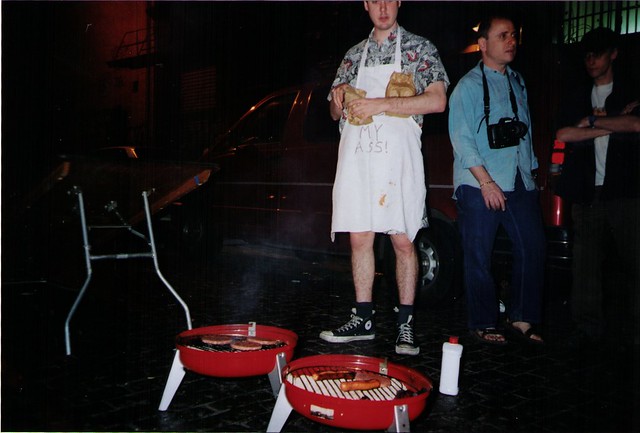 The Chef places the Meats of Summer on the twin pyres. Some conferring or quiet prayers, &c. ensued. Guy with bigger camera than mine. Someone in Hank’s posse was shooting video, too, historians, so get on that. 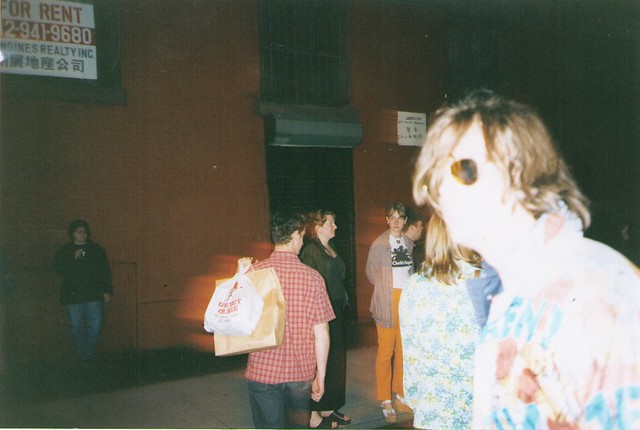 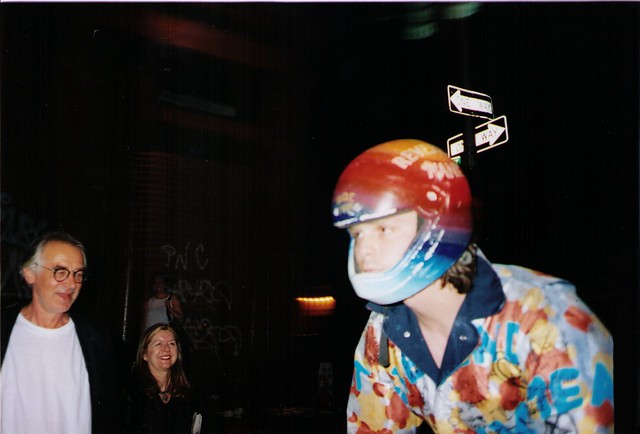 Glasses off, helmet on. 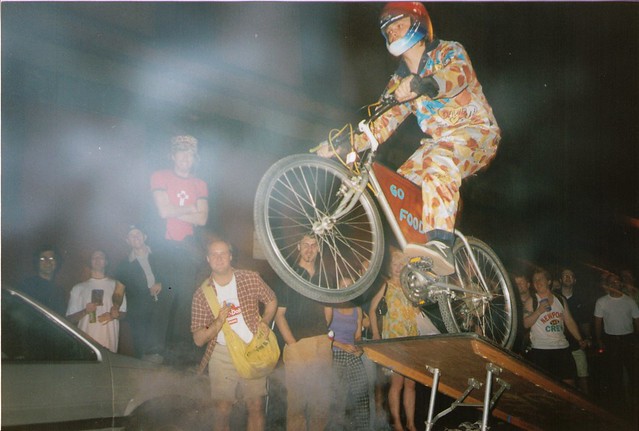 And he’s off, on his customized mountain bike, jumping over the Meats of Summer as the smoke rises heavenward. Dude in the background wearing a Play-Doh shirt. 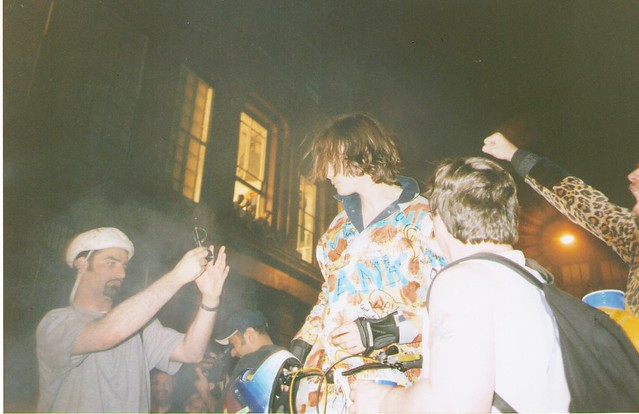 Reverend Hank’s pit crew rushes to embrace him, fistpump, and return his shades. People watching from the windows. 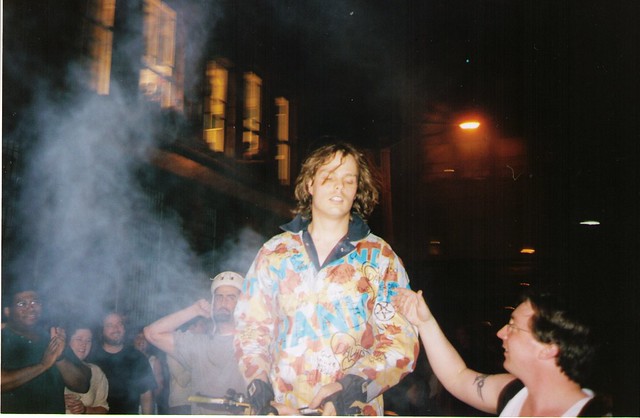 If I recall correctly, and I think Bronwyn will back me up on this, the Reverend did not actually land on his second ramp; he crashed into it and wiped out. But here he is, obviously, and miraculously, unharmed.
After this evening, Rev. Hank scored at least a couple of appearances on Conan O’Brien, perhaps as a next-gen Dave Osborne or something. But wherever his practice took him, and I haven’t kept up. I’d heard he married a firecracker of a woman, and so maybe he changed priorities, but that’s all I know. It was a perplexing and wonderful experience that made no sense except as itself. Photos are woefully inadequate to convey this accurately or fully, but if you’re telling the history of New York and performance and relational aesthetics and such, this should be plenty to get you started.
HOLY SMOKES HANK UPDATE: I guess I should have Googled one more time. Reverend Hank turned up on American Vaudeville Theater guru Trav S.D.’s blog literally a week after I’d given up finding anything about him.

When I knew Hank Flynn back in the late 90s, he was strictly “Reverend Hank” — a complete wild man. He was one the regulars at Rev Jen’s Anti-Slam and Faceboyz Open Mike. He was sort of a cross between a preacher and a race car driver — and he would just stand and rant in aviator shades and a jumpsuit: complete stream of consciousness, funny B.S. by the basketsful. In retrospect his sense of humor reminds me of Dave Chapelle — but throw some Jim Morrison in there, too.