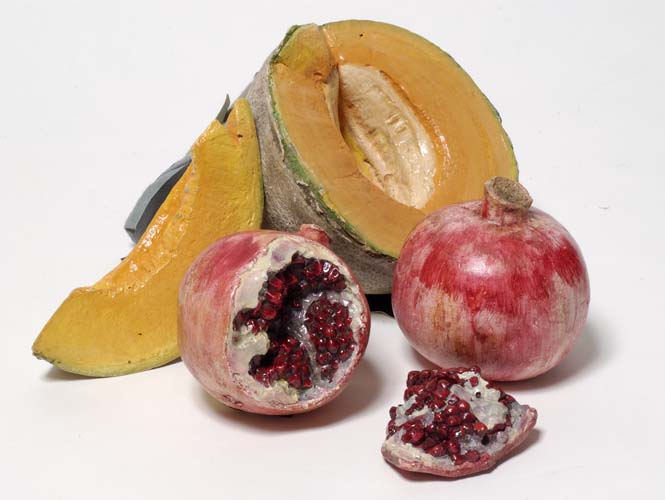 Melons and Pomegranates, 1956, hand-painted plaster, Matson Jones Custom Display
When these hand-painted, cast plaster works were sold at Swann in 2005, they were dated “circa 1955.” But I believe Gene Moore only began working with Tiffany & Co. in 1956. In 1956 and 1957, he commissioned at least seven window displays for Tiffany & Co. from Matson Jones, including a series inspired by still life paintings. Matson Jones was the commercial pseudonym for Jasper Johns and Robert Rauschenberg. 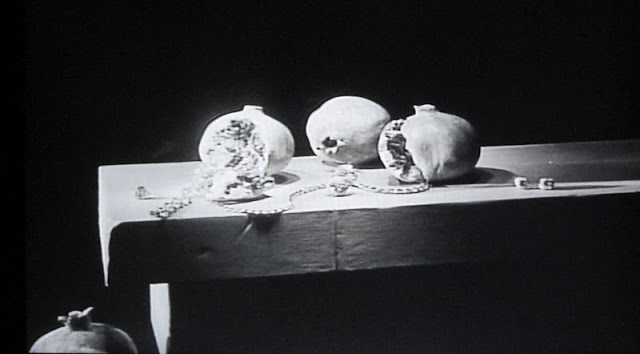 Tiffany & Co. window display designed by Matson Jones, 1956, image: madammeow, probably from Gene Moore’s 1990 book
The filmmaker and impresario Emilio de Antonio had, as “an artists’ agent,” been involved in arranging commissions from Moore for Rauschenberg, Johns, and Andy Warhol. One project Matson Jones executed for Moore client I. Miller involved “a kind of three-dimensional window display” interpretation of Andy Warhol’s shoe drawings, which were featured in the company’s ads at the time.
Another display for a Moore client [and Tiffany neighbor] Bonwit Teller included Johns’ 1957 painting, Flag on Orange Field. After Construction with J.J. Flag/ Short Circuit‘s inclusion at the Stable Gallery Annual in 1955, this may have been the second public exhibition of Johns’ Flag paintings; neither was credted to him.
Despite this professional overlap, and their mutual friendship with de Antonio, Johns told Paul Taylor in 1990 that he only met Warhol for the first time in 1961, when Andy bought a drawing out of Johns’ second solo show at Castelli. Soon after that, Warhol’s own comic strip-based paintings were shown in a Bonwit Teller window display, where they were likely seen by Roy Lichtenstein.
Except to whoever bought them in 2005, the current whereabouts of Matson Jones’ melons and pomegranates is unknown. Though I have heard some things.
“With the certificate of authenticity from the Robert Rauschenberg Foundation.” ! Nov 17 2005, Sale 2057 Lot 223 EARLY SCULPTURE BY JOHNS AND RAUSCHENBERG POP ART, est. $5,000-8,000, sold for $10,925 [swanngalleries.com]