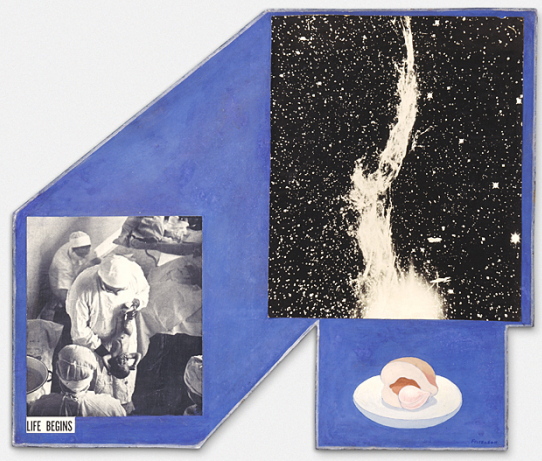 I don’t see or think about it nearly enough, but I’ve been fascinated by Lorser Feitelson’s 1936 collaged photo/painting Life Begins for years. 1936! LACMA acquired it in 1996.
Feitelson’s later, post-war, hard-edge abstraction gets much more attention than the 1930s “Post-surrealist” works, which generally makes sense. Something like Life Begins is just so unusual is almost doesn’t fit into that bucket, either. But seeing images of it again recently made me wonder just what is going on here. I can’t find almost anything written about it, except Steve Roden’s discussion of it in the LA Times a few years ago: “On some days it feels as hermetic as ‘outsider art,’ and on others it seems the most experimental painting he ever made. I’ve been visiting this work for 25 years, and I still don’t understand it. I really love that.”
Which, it’s nice to know it’s not just me who loves it, and who’s baffled by it.
The basics:Life Begins is oil and collage on a shaped masonite panel around two feet square. The painted elements are the blue space, which often gets called a sky, and a half peach and pit on a small plate. The collage elements are two black&white photographs, or close to it, of a doctor holding a newborn baby, cropped to preserve the caption, which gives the work its title; and an astronomical feature.
The “Life Begins” photo in Life Begins is easy enough to source: it’s the first photo printed in the first issue of LIFE Magazine, which began publication on November 23, 1936. [That means Life Begins was not in the Post-Surrealism show Feitelson organized for himself, his wife Helen Lundeberg, and other California-based artists at the Brooklyn Museum in May 1936. And it wasn’t among the Feitelsons included in Alfred Barr’s Fantastic Art, Dada & Surrealism show at The Museum of Modern Art in November 1936.]
The other element has taken more time to track down. When they describe it at all, most sources have called it a photo of a solar flare. But it’s not. While solar flares were being observed along with sunspots, on the face of the sun, there was no technology capable of photographing a solar flare like that in the 1930s. The only online source to identify the image correctly was a letter from an MD/amateur astrophotographer of the Journal of the American Medical Association, which had used Feitelson’s painting on their cover in 2004. It is a detail of the Western Veil Nebula (NGC 6960) in the constellation Cygnus.
We are very used to such images now, but in 1936, there were very few observatories capable of producing such a photo. The scientific understanding of nebulae, and of the universe itself, was in flux. It was only in 1924 that Edwin Hubble announced, first in the New York Times, that many of the objects called nebulae were actually galaxies, which existed far beyond our own Milky Way. As late as 1933, it was still a matter of speculation whether the Veil Nebula surrounded a star, and was actually the remnant of a supernova. 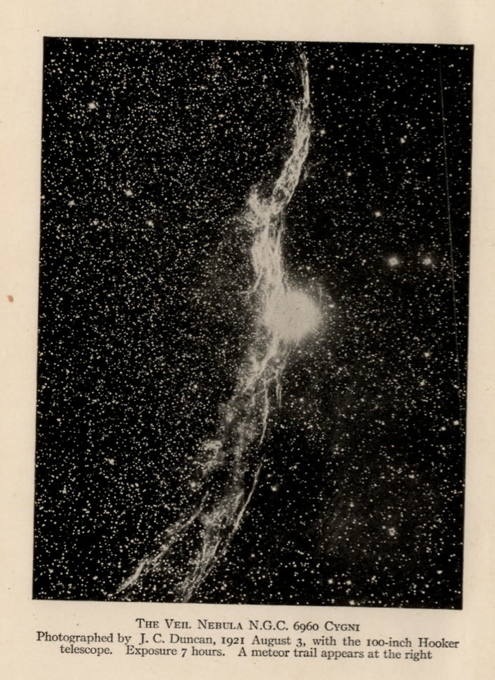 Let’s just say, thanks to Hubble the telescope, it’s difficult to search for historical astronomical images, which have been supplanted by higher resolution, full spectrum glitz. After a couple of evenings, though, I think I found Feitelson’s source. Wellesley astronomer John Charles Duncan, who published several articles on photographing nebulae, made a 7-hour exposure of NGC 6960 in 1921 using the largest telescope in the world, the Hooker Telescope at Mount Wilson Observatory. Duncan used the image as the frontispiece for Astronomy A Textbook, published in 1927. [above]
The image doesn’t match Feitelson’s in size, exposure, or cropping, obviously, but I suspect the artist either rephotographed the detail from the plate, or got access to the negative at Mount Wilson. Duncan later published a fainter, underexposed version of the image, which extrapolates to what an overexposed version like Feitelson’s would look like. 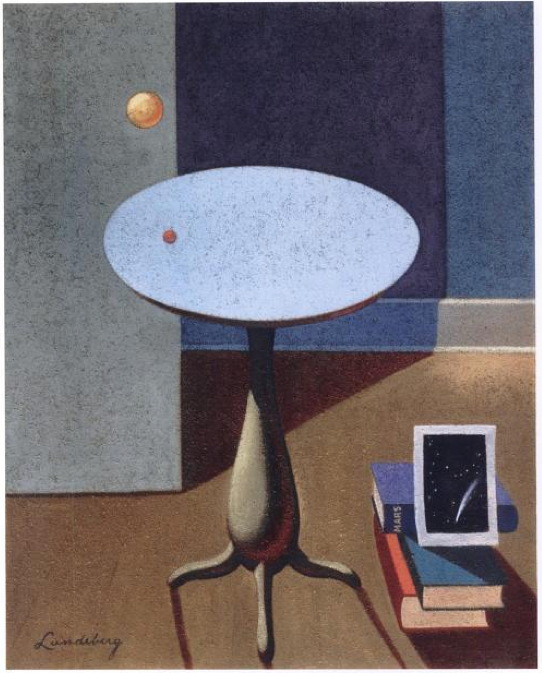 Helen Lundeberg, Red Planet (1934)
This image in Life Begins is not a one-off. Both Feitelson and his wife Helen Lundeberg included astrophotography in their Post-Surrealist paintings in the early 30’s. [Maybe Post-Surrealism feels a bit like Post-Internet: a way for artists to signal to lagging institutions they’ve incorporated something and are moving ahead.] Lundeberg’s Red Planet is a paradoxically lit interior featuring a red planet-looking orange hovering over a telescope mirror-looking tabletop, and a photograph of a comet leaning against a book titled, “Mars.” 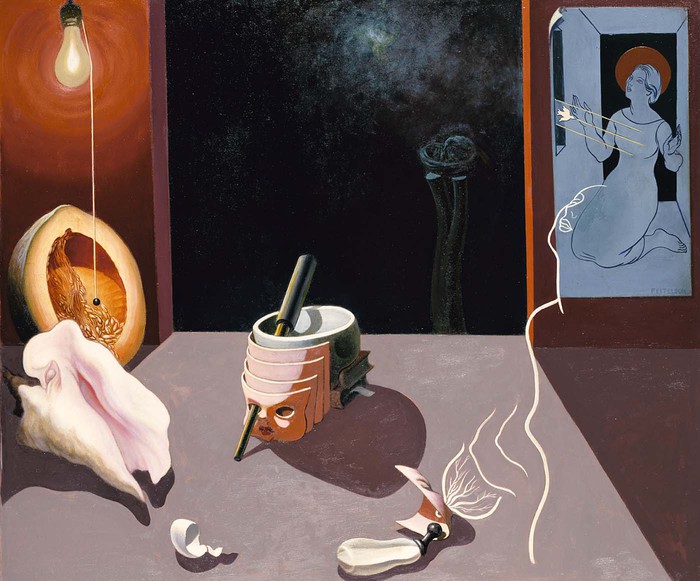 Lorser Feitelson, Genesis #2, 1934, collection Smithsonian American Art Museum
Feitelson’s Genesis #2, also 1934, has a telescope pointing through the eyes of several aging masks and a skull, propped on books, toward a painting of what looks to me like a photograph of the Crab Nebula. There’s also a trompe l’oeil drawing of an Annunciation, a Picabian outline of a woman and her developing breast, a baby bottle, a conch, an eggshell, and a sliced melon and light bulb that immediately make me think of Matson Jones-era Johns. Which, any connection is impossible, I know, but still.
Genesis #2 combines scientific, religious, and metaphorical accounts of birth, which makes it feel closely related to Life Begins. Now the unusual shape of Life Begins feels related to the perspectival lines and sharp, flat planes Feitelson used to define his spaces. Which makes Life Begins a variation on a Genesis II theme; when Life Magazine launched with that photo, of all photos, Feitelson must have really felt like he was onto something big.
Life Begins [lacma.org]
Genesis #2 [americanart.si.edu]