It was the first thing I thought of when I saw them, and so I noticed when Roberta Smith’s otherwise incisive review didn’t mention it, and thought maybe it was just me. Then my very sharp friend Sam emailed, shocked at the omission, and the more general lack of discussion of the connection. Which was a relief, then a puzzle. 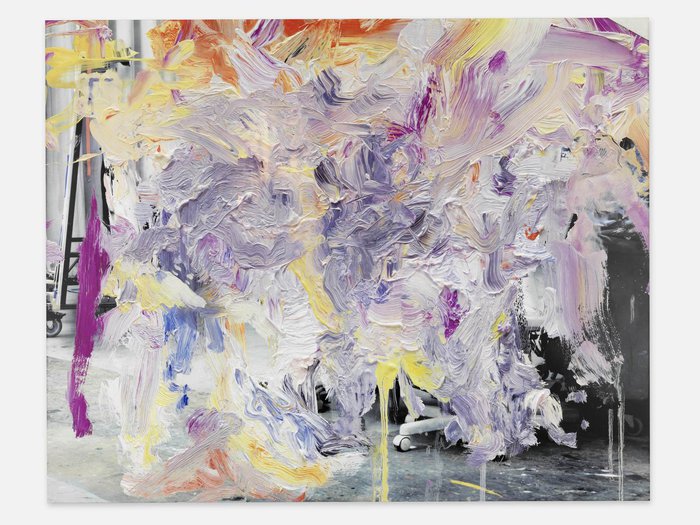 Gerhard Richter, Overpainted Photograph, image via hatje cantz
The differences actually feel like similarities. Richter has been smearing, wiping, knifing, and dripping paint on 10x15cm snapshots for more than twenty years now. Combining his paint-covered squeegees and family photos, Richter captures a single, quick gesture that works, and the photo lives, or doesn’t, and the mess goes in the trash. The survival rate’s around 50%. The first survivors ended up in Atlas; they proved themselves and became their own thing. A couple of deliberately made series became artist books. He’s given them away to friends and studio visitors; he’s used them as party favors; and he has quietly sold overpainted photos through Fred Jahn, a dealer in Munich. They had their first dedicated show and catalogue in 2009.
Richter’s overpainted photos exist as documents of chance, while Fischer’s show definite marks. Fischer paints on photographs. I would say that this, not the size, or the printing, is the main difference. 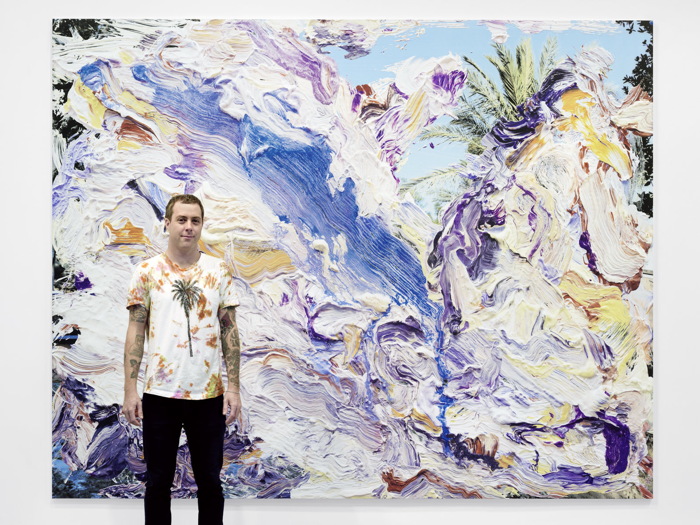 Man with palm tree outfit next to Urs Fischer, 2014, image: gbe
On the size: Fischer’s works are gigantic, like 9×11 feet. I imagined the contortions I might undergo to get one in our apartment; which window would I cut out to load them in? Since our ceilings are only barely 9 ft, could we live with it, under it, like a lean to? We’re gonna need a bigger house.
Conversely, in discussing Richter’s works, Markus Heinzelmann writes of the artist’s central interest in monumentality:

The overpainted photographs, despite their extremely small format, make an extremely monumental pictorial impact because the intricate photograph entices viewers into studying microscopic details. Encouraging viewers to increase their visual acuity in this away automatically transfers to photograph-related painting.

Only the Fischers are disoriented by their enlargedness, but both artists clearly like what the disparity between the paint mark and the photographic space underneath it does to a viewer’s sense of scale. [Fischer’s painting-related photographs feel like they began as 8×10-in prints, or maybe even bigger. That’d make them the size of a small but real canvas.] 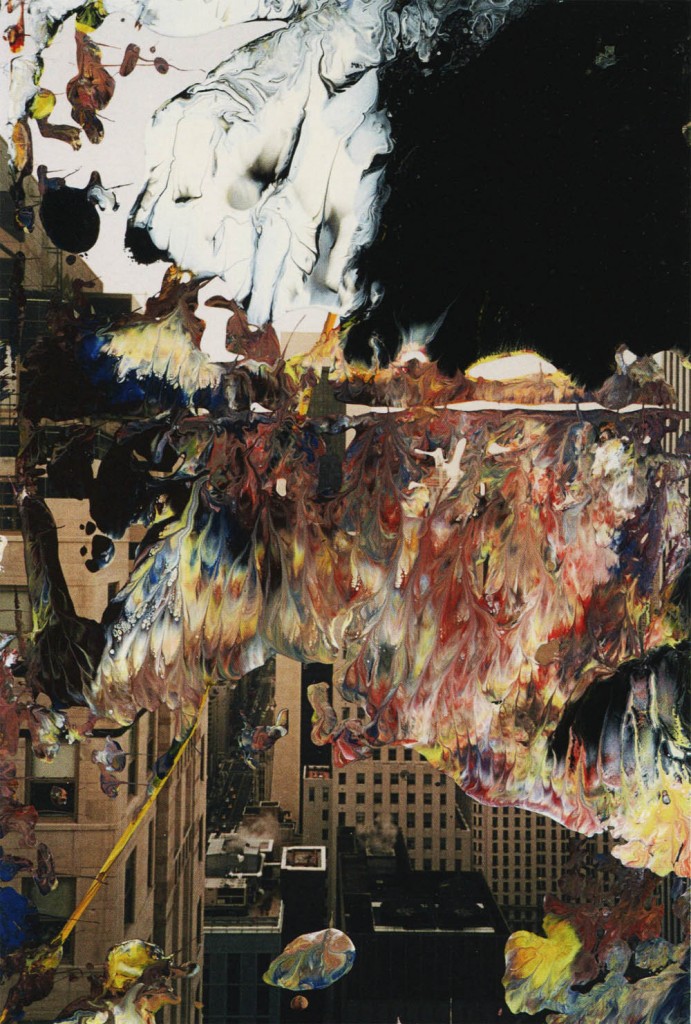 Gerhard Richter, Overpainted Photograph, image via ndlr
Both artists are also equally interested in their pictures as objects. Heinzelmann entire essay is about Richter’s overpainted photos as “objects of contemplation.” Fischer, meanwhile, forefronts his works’ physicality through description. They’re not merely “prints on aluminum,” but, “Aluminum panel, aluminum honeycomb, two-component epoxy adhesive, two-component epoxy primer, galvanized steel rivet nuts, acrylic primer, gesso, acrylic ink, spray enamel, acrylic silkscreen medium, acrylic paint.”
Which is ironic, given how they converge so completely and float so freely online. I would really like to see the two artists’ work side by side. 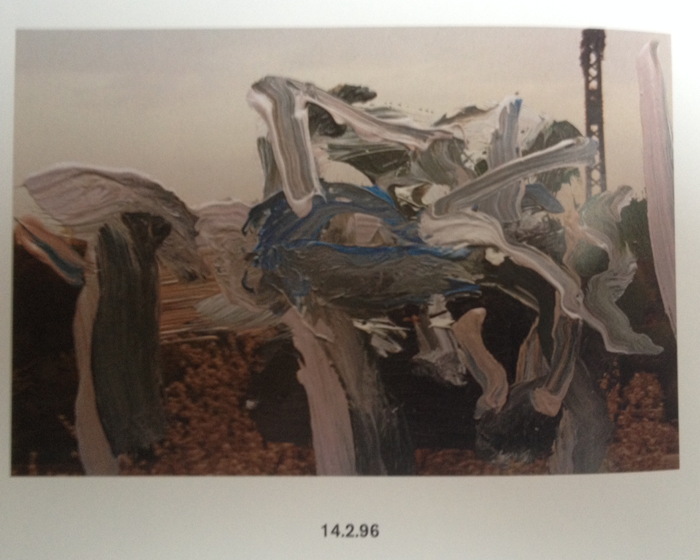 Richter, 14.2.96, from the book
update: I’ve been looking through the Hatje Cantz catalogue again, Richter’s are so fantastic. Several clear typologies emerge, including some that have been scraped after schmearing, but the actively worked over structure of this one, from Valentine’s Day 1996, may be unique. Maybe the thing to do is blow a few of them up, Fischer-size. Or half-Fischer-size, to start. First, though, I’ll wait and see if he sends me one for my birthday. He meaning Richter OR Fischer, I’m open.
Urs Fischer, 2014 exhibition [gavinbrown.biz]
Five years on, Gerhard Richter: Overpainted Photographs is getting expensive and staying awesome [amazon]