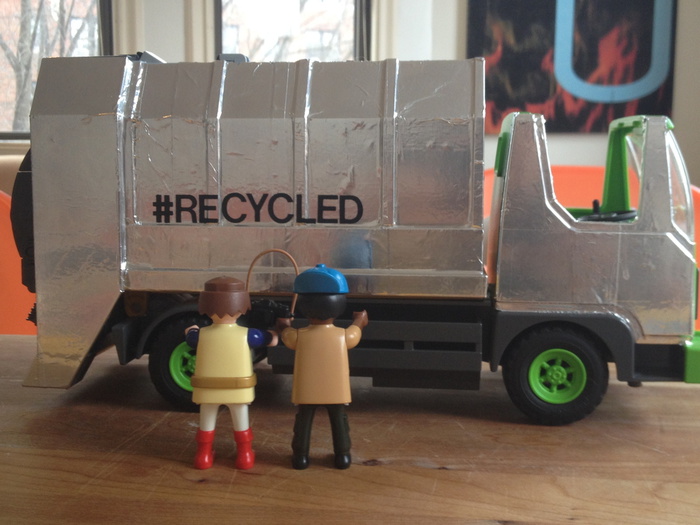 study for The Social Mirror, Recycled, 2015
Recently I entered an open call for a public art commission. It was sponsored by the District of Columbia’s Department of Public Works, which was looking for designs in which to vinyl wrap DC’s single-stream recycling trucks.
I was compelled to enter for several reasons. One is my own long-standing interest in the highly under-utilized medium of vinyl wrapping vehicles. The other is a strong sense of responsibility and history surrounding any artistic endeavor involving garbage trucks. 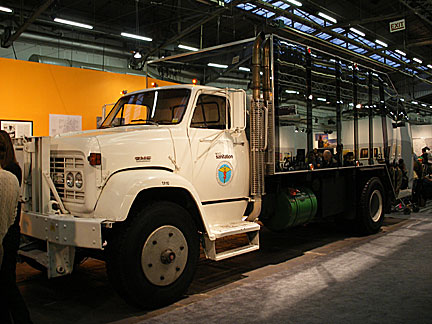 The Social Mirror, 1983, Mierle Laderman Ukeles, image: feldmangallery.com
The examples shown in the RFP of vinyl wrapped garbage trucks in other cities were, to put it mildly, atrocious. Maybe underwhelming is more politic. Whatever, it turns out there are jurisdictions in this country who have been putting art on garbage trucks without the slightest apparent regard for the alpha and omega of garbage truck art: Mierle Laderman Ukeles’ 1983 The Social Mirror. It just didn’t seem right. It didn’t seem possible.

So I determined to enter a proposal that not only acknowledged The Social Mirror, but that might realize its actual potential. Because of the fragility of its mirrored glass paneling, The Social Mirror is really a sculpture, and only functions occasionally, ceremonially, as a truck. But mirror-finish wrap is now a thing, albeit an expensive, difficult-to-apply thing usually reserved for Lamborghinis in the Gulf. So it was now possible to bring a gorgeously mirrored recycling truck into daily service on the street.
I did not think that straightup appropriating Laderman Ukeles’ concept would fly with a selection committee, though. And they would never accept my proposal on the basis of my brand. So more work had to be done. 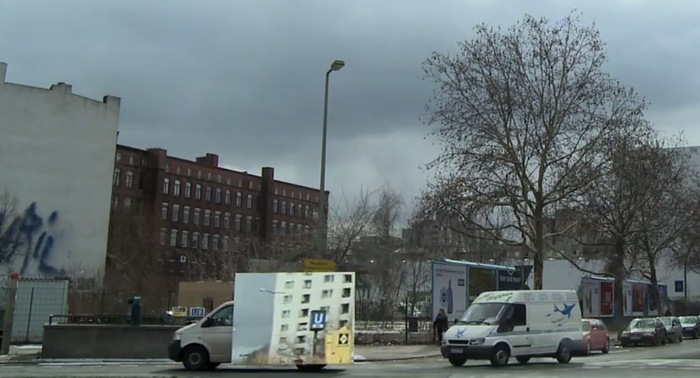 video still, Innen Stadt Aussen, Olafur Eliasson, 2010, image: oe’s vimeo
The idea of a mirror-paneled truck driving around town immediately brought to my mind Olafur Eliasson’s 2010 project for Berlin, Innen Stadt Aussen, which was intended to make citizens aware of their own place in an evershifting city. This notion of a mirrored truck as a connection machine, as a means of fostering a sense of responsibility for our own consumption, waste, and recycling, resonated nicely with the RFP’s stated goals.

Study for The Social Mirror, Recycled, 2015
Mirrors and attention would beget selfies, I thought, and selfies needed a hashtag. So something needed to be printed on the truck after all. Which led me to Rirkrit and his favorite Spongebob Squarepants quote, “Of course, in the future, everything will be chrome.” Which I adapted to fit on two sides of the truck:
OF COURSE
IN THE
FUTURE
and
EVERYTHING
WILL BE
#RECYCLED
Then I gave the biggest shoutout I could to Laderman Ukeles by titling the proposal The Social Mirror, Recycled. I discussed these artists and their socially engaged projects in my own proposal, along with the social media engagement it encouraged. When I couldn’t get the right chrome finish effect in Photoshop, I made a shiny little Playmobil maquette and drove it around town to generate some visuals. 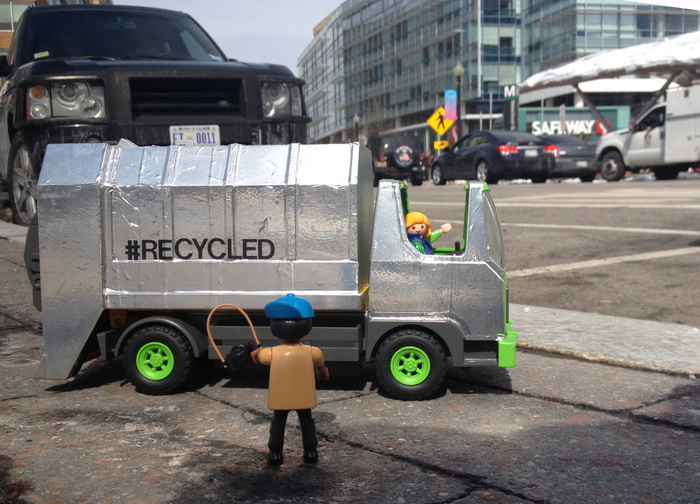 study for The Social Mirror Recycled, 2015
The proposal was just rejected this afternoon. I have asked for feedback, but I am confident that there are many reasons it could have been nixed. Mirror finish wrapping is significantly more expensive, complicated, and fragile than regular wrap. To avert a cost-driven rejection up front, I suggested that the trucks could be wrapped only on the street-facing side. This would also, I thought, reduce the potentially distracting reflections for drivers.
Maybe Laderman Ukeles is right to limit a mirrored truck’s appearances to parades and art fairs. Or maybe it’s just the kind of spectacle we need right now to save our planet from ourselves. Either way, The Social Mirror Recycled is now available for license to other jurisdictions. Just drop me a line.