Soon after her arrival at MoMA in the late 1990s, Laura Hoptman and I had [what I remember as] a heated discussion about the nature of art. She said that as part of the culture, all art was for the public. I tried to argue that there could be exceptions; she was unconvinced. Of course, to put it more bluntly than she ever did, part of her job was to instill in an eager young collector the instinct to steward his art and money toward the museum. Which, sure. But what I was unable to explain at the time was that I imagined an artist being able to make an artwork not for “the public,” but for a person, that a work could be intended to be experienced solely by a particular person, and that would be enough.
[I didn’t know about Ian Wilson’s conversational works at the time, but that, along with James Lee Byars’ fantastical ephemera, have given me plenty of reasons to recall our invigorating conversation. Also, the irony that it took place on the deck at the Rubell’s hotel in Miami, after a visit to their still-raw DEA warehouse, means I get flashbacks every time I go to ABMB. But that’s not the point right now.] 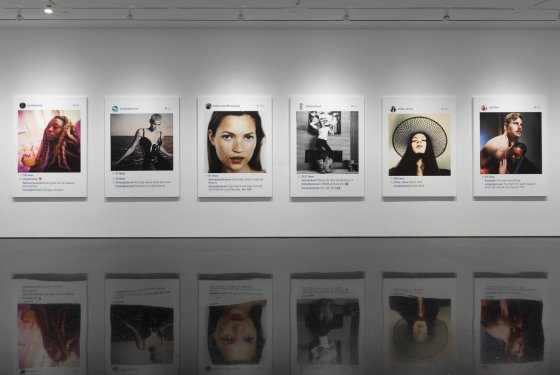 Anyway, last Fall, I wrote about Richard Prince’s Instagram portraits show, and what I saw as the subtle mix of alteration and aspiration that went into them. Our social media personas are one fiction, and his comments and interactions are another, and the construction of the digital interface/frame is yet a third. 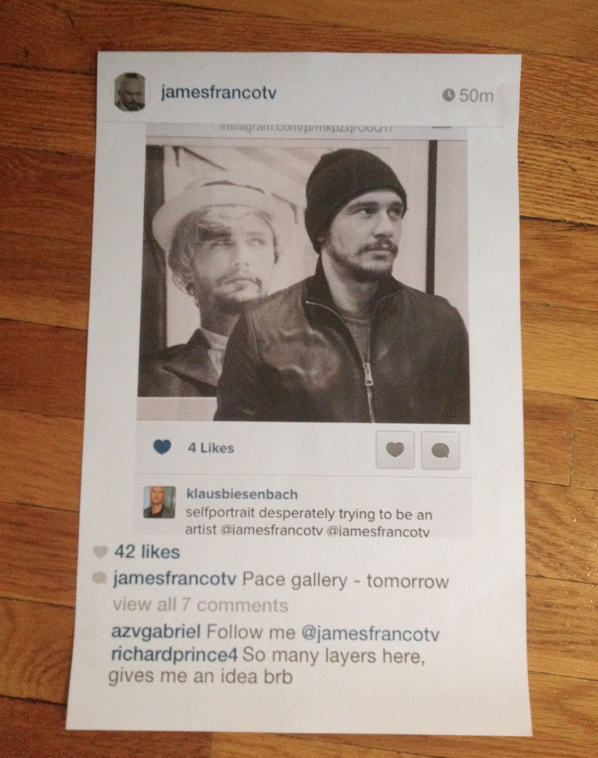 I framed Richard Prince: Study for Untitled (richardprince4), 2014
To illustrate the point, and to underscore what I saw as some of the more abject, exposed emotional elements of Prince’s works, I created my own Instagram portrait “by” Prince, using a convoluted, regrammed image of James Franco as Cindy Sherman by Klaus Biesenbach.
I added a flatfooted quote from Prince at the bottom, rolled back the timestamp, and then made a Prince-like print of the screenshot. Which I used as an illustration in the blog post, fictionalized evidence that Prince’s controversial Instagram works had been inspired by Franco’s embarrassing Sherman reboots. I thought my conditionals and qualifiers would be obvious…

Did Prince recognize something of himself through Franco’s[!] layers of mediated desperation [Klaus’s (?) term], not just an artist, but a Shermanesque shapeshifting master? Did he see Franco’s and these other kids’ Instagram personas and want to get in on it? Did he want to be a Nightcore? Or worse, did he want to be a Franco? Is this the lifestyle envy that fuels the whole thing? Or is this just one more image, one more comment, one more layer of media we’re supposed to question but probably won’t?

…but even the satirical suggestion was still too much for Prince, who unfollowed me on Twitter soon afterward. Prince prefers to be in control of the fictions around his works, and I can dig that. But also he was the one who’d declared the unilateral appropriation and manipulation of someone else’s social media presence as a tactic. And as Warhol said about Coca-cola, now everyone has an iPhone, from the president to the bum in the street. 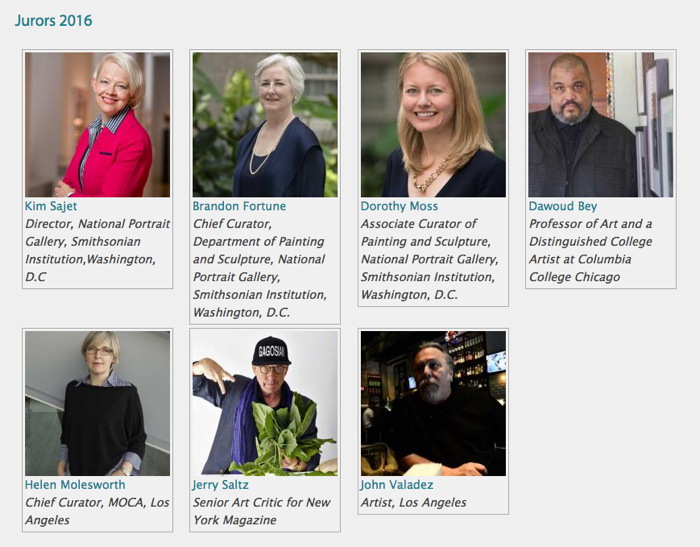 Dawoud Bey be like, “Jerry…”
I bring this up now because just days after posting the Prince/Franco/Klaus pileup, I saw an announcement for the National Portrait Gallery’s Outwin Boochever Portrait Competition. I’ve seen previous NPG Portrait Competition exhibitions, and they were numbing, like a state fair for art. And then I saw that this time, one of the jurors was Jerry Saltz. And I decided that it would be hilarious to plant this toxic matryoshka doll of a portrait in the competition, for an audience of one: Jerry. 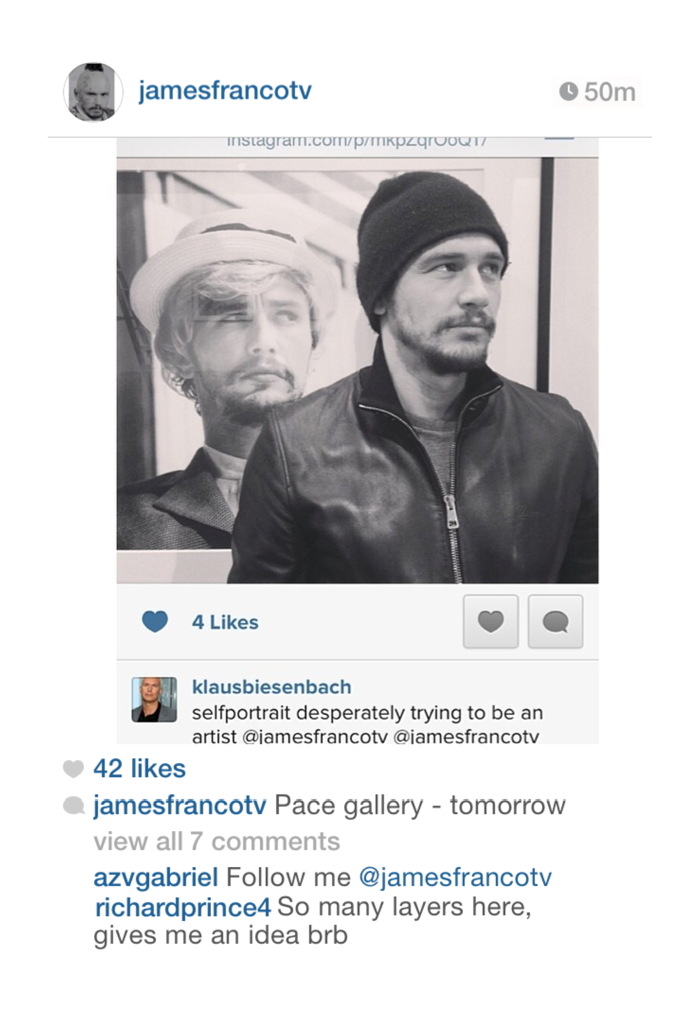 Untitled (richardprince4), 2014, 72×48 in., inkjet on canvas, unrealized
So I entered it. The first round is judging by jpg and a brief explanatory text [below]. The work would be an inkjet, 4-ft wide, the same dimensions as Prince’s, but I would print and stretch it only after it got selected for the in-person judging of the semi-finals. I called it Untitled (richardprince4). It was a portrait of Prince. And not a terribly good one. I didn’t get his comment right; it turns out it takes a lot of effort to appear as awkward as Prince does on Instagram. My portrait of him feels about as successful as that dead-eyed painting of the Duchess of Cambridge a while back.
But that was secondary to its presence in the staid context of the National Portrait Gallery competition, where I imagined it sitting, waiting, like an IED of WTF, to blow up the ideas of portraiture and reality. I kept totally silent about the entry for seven months, because I liked the idea of Jerry stumbling across it in a weary jury slideshow and being momentarily entertained by it way more than I liked the idea of kiss-ass campaigning.
Which wouldn’t help anyway. The nested art world personalities are too insidery, and the references are so contorted, and the text so clumsy, that I didn’t think anyone besides Jerry would ever care about it, and even he was iffy. If he grabbed onto it, great, but I never imagined it would get past that first shock or bemusement in the competition. Maybe a whoopie cushion is a better analogy than an IED.
And sure enough, my rejection notice came today. Whatever reaction he had, I don’t know–there were 2,500+ entries, so maybe he didn’t even see it after all–but I found the months of secret possibility to be quite satisfying. This image has done its job. And the world is a better place without a 4×6 foot canvas version of it in it.
Or maybe…if I print it up and light it on fire, Richard Prince will start following me on Twitter again…
View Source: Richard Prince’s Instagram Portraits
Outwin Boochever Portrait Competition 2016 [portraitcompetition.si.edu]

Should we trust a social media platform any more than we trust a picture? Should we even read the comments much less believe them?
Richard Prince’s Instagram portraits look like straight-up screenshots, but they are composed in ways that don’t immediately register. As I hunted for the originals I wondered, did Prince’s “New Portraits” actually come from James Franco’s “New Film Stills”? “So many layers”? It’s layers all the way down, bro!
Prince once testified of his interest in Rastas:

RP: I think maybe I liked the way that they were so different.
Q: Than what?
RP: Than myself. I don’t have dreads. I wish I could…[P]erhaps it goes back to the girlfriends.The reason why I took the girlfriends is I wanted to be a girlfriend.

Was Prince taken in by Instagram’s promise of persona and reinvention? Did Prince, who’d once made a double self-portrait with Sherman, now want to be Franco? Or is this just one more image, one more comment, one more layer we ought to question but don’t?